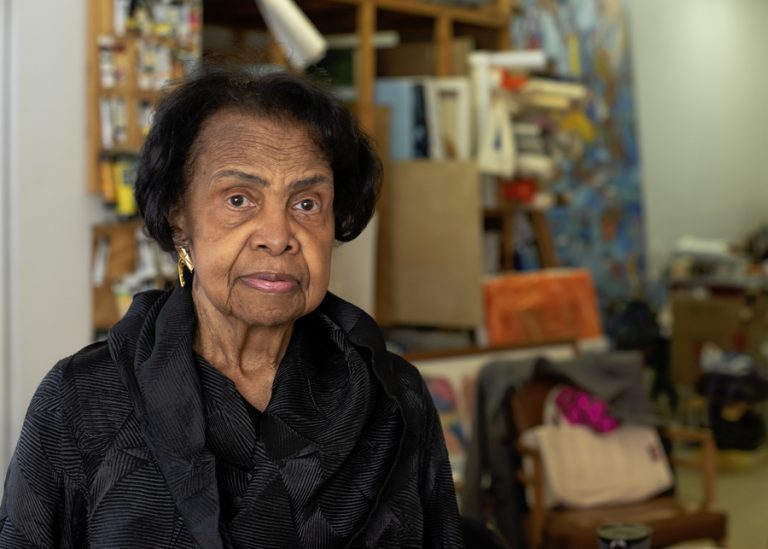 Shirley Woodson in her Detroit studio. A new painting grows in the background.

Woodson, 84, is the 13th metro Detroit artist to receive the award, one of Detroit’s most coveted cultural prizes. She is widely honored for devoting decades to broadening education and exhibition opportunities for generations of African American artists, and for championing art as an essential lens into Detroit’s history and culture.

“This is a totally incredible experience,’’ she said. “To get the call, to hear Kresge  … the recognition is so overwhelming. My mind just went blank. I couldn’t say anything for a long time.’’

As a painter whose career spans six decades, Woodson’s signature style includes blending bold colors with precise yet wildly expressive techniques, whether she is using a brush or experimenting with stencils and spray paints. Her paintings and collages are layered with references to a love of folklore, cultural iconography and elements of nature. Human figures often appear faceless — a purposeful choice by Woodson to draw viewers close. Her paintings number in the hundreds, and her Northwest Detroit studio overflows with works in progress.

Beyond an ongoing studio practice, Woodson’s name is synonymous with arts education and mentoring generations of young African American artists including the late Gilda Snowden, who became a protégé and acclaimed painter and arts educator in her own right. Snowden’s legacy is celebrated annually through Kresge-funded Gilda Awards for risk-taking emerging artists.

In a 1996 interview, Snowden highlighted Woodson’s mentorship: “As an educator, and a career artist, she has been a staunch supporter of African American artists. As a young artist, she gave me encouragement.’’

In 1974, Woodson co-founded the Michigan chapter of the National Conference of Artists. Founded in 1959, the conference is the nation’s oldest arts organization focused on nurturing, developing and promoting opportunities for Black visual artists. With a network across the country, NCA also connects artists to educators, historians, critics, collectors, curators, gallery owners who are also members. Woodson, who retired from public education in 2008, sits on the NCA’s executive board and continues to lead the Michigan chapter as its president.

Her dedication to cultivating and expanding creative opportunities for new generations underscores the arts’ role in building and preserving vibrant communities, said Rip Rapson, the president and CEO of The Kresge Foundation.

“Since its inception more than a decade ago, the Kresge Eminent Artist award has elevated artists for their contributions to both their art form and the cultural community of metropolitan Detroit,” said Rip Rapson, the president and CEO of The Kresge Foundation. “Shirley Woodson has taught and mentored, cultivating and expanding creative opportunities for successive generations. She has organized artists and curated their exhibitions. And she is an artist who leads by engaged example. Her superlative technique is rooted in inviting the viewer to see the world in a different way, whether the work is abstract, figurative, or something of a blend. Her impact through all these channels underscores with enormous power the role that arts can, and do, play in building and preserving vibrant communities.”

Funded by The Kresge Foundation, the Kresge Eminent Artist awards — along with Kresge Artist Fellowships and Gilda Awards — are administered by the Kresge Arts in Detroit office, also funded by the foundation, at the College for Creative Studies.

“For decades, Woodson’s instruction of art students and upcoming art professionals have anchored and shaped arts and culture in Detroit. For the art and design students who attend CCS — and for all of us — Woodson is an inspiring example of an artist-educator’s relentless dedication and lasting impact on the trajectory of an entire community,” said College for Creative Studies President Donald L. Tuski. “It is an honor to administer Kresge Arts in Detroit on behalf of The Kresge Foundation, and to celebrate Shirley Woodson as the 2021 Kresge Eminent Artist.”

Along with a $50,000 prize, each year’s Kresge Eminent Artist is honored with a short film — set to debut during a virtual celebration event in April — and through the creation of a monograph. (The Kresge Foundation publishes the book and distributes it to the public at no cost. Monographs from previous years can be ordered or downloaded, and the Woodson monograph can be preordered, here.)

Though noted for her oils, pastels and acrylics, Woodson’s legacy also includes deep studies and mastery of drawing, watercolor, collage, stencils and mixed media assemblages. Much of her work begins with a single point of curiosity and expands into a series of a dozen or more paintings and collages She has been known to spend up to a year, sometimes more, investigating a single subject or idea such as her interest in the concepts of journeys, flight and Egypt.

Her paintings have been in many solo and group shows and  are included in more than 23 permanent collections across the United States, including the Detroit Institute of Arts and Charles H. Wright Museum of African American History in Detroit, Michigan; Mott-Warsh Collection of Contemporary Art in Flint, Michigan; Schomburg Center for Research in Black Culture, New York, New York; Museum of the National Center for Afro-American Artists, Boston, Massachusetts; Hampton University Museum of Art, Hampton, Virginia; and the Hirschhorn Museum, Washington, D.C.

With Woodson’s longevity has come an array of signature local and national awards and grants, among them a MacDowell fellowship in New Hampshire, the Detroit Institute of Arts’ Alain Locke Award, a Michigan Council for the Arts grant, the History Makers Award, Distinguished Award for Pioneering in the Arts from United Black Artists, the Purchase Award from the Toledo Arts Commission. Wayne State University’s Arts Achievement Award, and the Dr. Charles H. Wright Award for Excellence for Arts in Education.

Just days after absorbing the “shock” of her selection as the 2021 Kresge Eminent Artist, Woodson received another surprising phone call, an invitation from the Detroit Artist Market to headline a solo show later in 2021.

Woodson joins 12 other pioneering metro Detroit artists, working in music, literary arts, and visual arts, honored with the Kresge Eminent Artist. “I know many of the artists who have been selected over the years. I’m thrilled to be among them and to see that Kresge is continuing to genuinely support all that art adds to a community. We’re so fortunate in Detroit to have an arts community that’s never stopped,” Woodson said.

House, the 2019 Kresge Eminent Artist, was one of five artists and arts professionals charged with selecting the award’s 2021 recipient.

“It was the longevity of her conscious contributions that made Shirley stand out,’’ explained House. “So many years, decades of this kind of unrelenting daily service to community, to being an institution-builder, and still being able to produce so prolifically, so beautifully. That’s special. To me, that’s what it means to be an artist. It’s wonderful to make great work, but are you rooted? Are you responding to the needs, to community around — Shirley has done that.’’

Panelist Carole Morisseau, an award-winning visual and performing artist, says Woodson personifies the essence of Kresge’s Eminent Artist Award. “She’s a wonderful colorist. Her use of layering, and producing different series and themes is astounding. And she’s steadfast in her support of other artists and arts students. I think people will feel that this award is being given to someone who’s really worthy of it. It punctuates all that she’s done, for a very long time, to help forge an art community.

Art from the Start

Shirley Woodson was born March 3, 1936, in Pulaski, Tennessee. She became a Detroiter three months later when her parents relocated to be closer to relatives and opportunity.

The art bug bit Woodson early, she recalls: “My first recollection that art was of any interest to me was really in kindergarten. I remember the art room so vividly; it was a downstairs room. I loved being there.’’

Woodson followed that initial spark through her public education in Detroit, and later at Wayne State University where she earned a Bachelor of Fine Arts degree in 1958 and a Master of Fine Arts in 1965. In between the WSU degrees she pursued graduate studies in painting and art history at the School of the Art Institute of Chicago.

Though neither of her parents was an artist – her father worked for Ford, her mother was a homemaker – their encouragement strengthened every choice, she says.

Woodson then spent more than 26 years teaching art and guiding the arts curriculum for Highland Park Schools and the now-defunct Highland Park Community College. She later served as Detroit Public Schools supervisor of fine arts from 1992 to 2008 and also worked as an adjunct art teacher at Wayne State University in the mid-1990s.

Her achievements are highlighted in several seminal anthologies and surveys of pioneering African American artists and art leaders including The Art of Black American Women: Works of Twenty-Four Artists of the Twentieth Century, by Robert Henkes and Gumbo Ya Ya: Anthology of Contemporary African-American Women Artists.

“The different threads of my life have always been connected,’’ she said. “It’s all been about art, the opportunity to express and reflect and connect with the community and the world around me. Art is vital.’’

Woodson also credits art — specifically a small still life that she painted for her late younger brother Curtis — for connecting her to the love of her life, Edsel Reid. In 1965, Reid, an art collector, saw her work hanging in her brother’s home and insisted on meeting the artist. He purchased multiple pieces and developed even greater interest in Woodson the woman.

Two years later, in the summer of 1967, Woodson and Reid were married, and in addition to continuing a shared love of art, the couple also began a family, becoming parents to two sons, Khari and Senghor Reid. Edsel, who was also a jazz radio host for a number of years on WDET-FM, died in 2000. (Son Senghor is a 2009 Kresge Arts in Detroit Fellow, awarded for his work in visual arts.)

Since learning of her selection, Woodson has divided her time between sorting through old works, adding touches to a new ongoing acrylic series (focused on her vessels and nature), and slowly reflecting upon the life choices that led her to this moment.

“In a sense, it’s like I’ve been handed a blank canvas,’’ she said. “I’m looking at everything again, like a dream. I’m excited to see where it leads.’’

The complete 2021 Kresge Eminent Artist selection panel is comprised of: