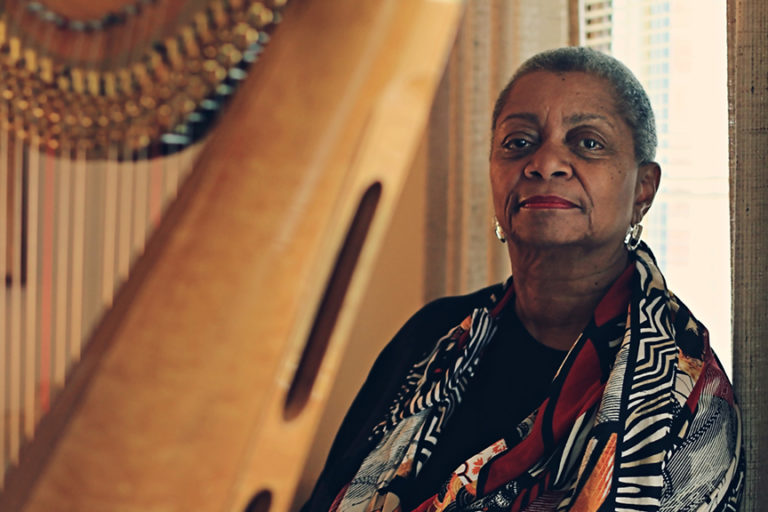 As a harpist, vocalist and lifelong teacher, Terry-Ross’ virtuosity, passion and integrity have placed her center stage in a unique legacy of performance and music education that calls Detroit its birthplace and spans nearly a century.

She has been recognized nationally, and at the state and local levels, as a music educator who has empowered generations of students to become influential artists and educators in their own right.

She has been principal harpist at the Michigan Opera Theatre for 40 years – virtually its entire existence – and has played on numerous occasions with the Detroit Symphony Orchestra under three musical directors. She has performed with Luciano Pavarotti, Sammy Davis Jr. and Johnny Mathis, among others. Her characteristically warm and deep sound can be heard on many Motown tracks of the 1970s, including recordings by Marvin Gaye and the Temptations, not to mention a host of records since then.

Terry-Ross is particularly proud of her decades as an award-winning educator. She spent 31 years at the helm of Cass Technical High School’s Harp and Vocal Ensemble, a hallmark program of the legendary music education department that has spawned stellar talents for decades. Terry-Ross’ former students include teachers, performing professionals and notables in the world of classical instrumental music, opera and jazz.

Currently, she is an adjunct associate professor of harp, choral conducting and vocal music education at Wayne State University. She continues to perform with MOT and in her chamber music group, the Eason Trio. She has been a teacher, conductor and consultant for the University of California’s Young Musician Program, where she established a harp program in 2006, and she remains an adviser for the Young Musicians Choral Orchestra in Berkeley, Calif.

Terry-Ross, 70, joins eight other metropolitan-area artists who, since 2008, have received the award and $50,000 prize in recognition of professional achievements in their medium, contributions to the cultural community and dedication to Detroit and its residents. The award also includes the creation of an artist monograph which will be released at a public event later this year. To reserve a complimentary copy of the monograph visit our Kresge Eminent Artist page.

Kresge’s Eminent Artist Award is a funded by Kresge’s Detroit Program, which uses grantmaking and social investing to promote long-term, equitable opportunity in the foundation’s hometown. The Kresge Eminent Artist Award, Kresge Artist Fellowships and Gilda Awards for emerging artists are administered by the Kresge Arts in Detroit office at the College for Creative Studies in Detroit.

“When I received the news, I was shocked,” Terry-Ross says. “I have never lived my life seeking things out. Music has been the place where I have found discipline, integrity and joy. I was lucky enough to have a very loving, supportive family. My grandmother used to always say to me, ‘You were given a gift. But it’s not a gift unless you give it away.’ And I have always believed that if you just do honor to your gift, things will happen.”

“Patricia Terry-Ross is an unsung musical hero in Detroit, and it’s well time to recognize and sing her praises,” says Kresge President and CEO Rip Rapson. “From her work on Motown sessions to decades of performances as principal harpist with the Michigan Opera Theatre, her sound has enriched our lives without most of us knowing her name. Moreover, she is the exemplar of artist-teachers in our community, those who both create at the highest level while nurturing the gifts of others to carry the torch forward.”

“Among our core beliefs at The Kresge Foundation is that a thriving arts and cultural community enriches the quality of life in numerous ways,” adds Rapson. “The Kresge Arts in Detroit Advisory Council has again recognized an artist whose artistry, conviction and generosity have made her a role model for many, and who deserves to be a role model for more of us still.”

“From a young age, it was clear that Patricia Terry-Ross was gifted with a unique talent for music that could take her anywhere,” says College for Creative Studies President Richard L. Rogers. “Throughout her life, she has shared that gift generously, working with a dazzling array of iconic musicians, uplifting audiences in Detroit and far beyond, and guiding students – from Cass Tech to Wayne State – to develop and share their own gifts. CCS is honored to partner with The Kresge Foundation to highlight artists whose exceptional contributions are integral to the vibrancy of Detroit’s cultural environment. As an art and design college committed to relentless creativity as an educational vehicle, it is particularly heartwarming to celebrate 2017 Kresge Eminent Artist Patricia Terry-Ross, a musician whose talent and passion have taken her to countless stages and personal heights, while never detracting from her main stage role in the music education of Detroit students.”

Patricia Terry-Ross grew up near the Boston-Edison historic district in Detroit. Her parents recognized her talent when she was singing and dancing before she left the crib. At age 5, she began formal training in piano. She made her television debut a year later with a piano solo on “The Auntie Dee Show” on WXYZ-TV Detroit. At age 7, her parents enrolled her at the Detroit Conservatory of Music, where she continued taking classes until college. Throughout elementary school, junior high and high school, teachers praised Terry-Ross’ aptitude for any instrument they handed her, which included violin and timpani. But it wasn’t until she started at Cass Technical High School that she found her true passion.

“Had I not gone to Cass Tech, I would not be a harpist. I loved the sound. There was nothing like it. The sound of a harp string is immediate. Something about it made me feel that, as much as I loved to sing and play other instruments, I could sing a different kind of song.”

Terry-Ross attended the University of Michigan, where she received a bachelor’s degree in choral music education; continuing in the master’s program with a full-ride scholarship, she graduated in 1967 as a double major in choral music education and harp performance. While completing her graduate studies, she attended the Tanglewood Institute, Boston University’s highly regarded training program for aspiring musicians. During summers, she practiced at the home of Dorothy Ashby on Ashby’s own instrument, which the jazz artist made available to Terry-Ross so she could hone her craft just five blocks from home.

She began her career as an instructor in 1969 at the former Pattengill Elementary on Detroit’s west side, and stayed there for seven years before receiving an important phone call.

It seemed that Velma Froude was retiring soon and had told Detroit Public Schools Director of Music Education William Koerper she was adamant that Terry-Ross should continue her mission at Cass. Terry-Ross recalled her reaction: “I didn’t respond, I just said, ‘Can I call her first?’”

On the phone Froude confirmed that Terry-Ross was her sole choice to succeed her as director of the renowned Harp and Vocal Ensemble.

Terry-Ross was hired in January 1976 and stayed at Cass Tech for 31 years, teaching harp, piano and voice, as well music theory and harmony.

Throughout her tenure, Terry-Ross’ commitment to outstanding education has been recognized. She was one of 40 music teachers nationally to receive the “Music of the Heart” Award (1999) and was a Detroit Public Schools teacher of the year and Michigan teacher of the year finalist (1992-93). In 2004, the American Choral Directors Association of Michigan honored her with the Maynard Klein Award, celebrating her exceptional career as a choral conductor. When Cass Tech celebrated the famed harp program’s 90th anniversary last year, she was there, alongside current and former students, celebrating the oldest ongoing harp program in a public school in the country.

“I had a watershed moment in 1988,” Terry-Ross explains. “A good friend of mine, Liz Ilku, was going to retire from her post of principal harp for the Detroit Symphony Orchestra. I had performed with them so often that they told me if I wanted to audition, I could skip the first round and join the second round. One of my students figured I was going to audition. She came to me and said, ’So what are we going to do when you leave us?’”

“That was my ‘a-ha’ moment. I said to myself, I don’t want to leave this program that made me. I already had the best of all possible worlds, teaching and performing at a high level.”

Terry-Ross’ former students, likewise, are performing at high levels. The Eason Trio recently commissioned a work by one of Terry-Ross’ former students, composer Sally Lamb McCune; the recipient of many awards, including honors from the American Academy of Arts and Letters and New York Foundation for the Arts, McCune has taught at Cornell and Syracuse universities and currently serves on the faculty at Ithaca College. Other former students from the Harp and Vocal Ensemble include soprano Janet Williams, who has sung leading roles with the Metropolitan Opera, Paris Opera and other top companies in the United States and Europe; jazz violinist Regina Carter, recipient of a MacArthur genius award; and pianist-producer Carlos McKinney, who won a Grammy Award for his work with Rhianna.

Throughout her career, Terry-Ross has performed across the country. She was one of three harpists to play Brahms’ “Ein Deutsches Requiem” with the Detroit Symphony Orchestra at both Carnegie Hall and the Kennedy Center in the late 1970s. She was also one of three harpists to perform on the Grammy-nominated recording of “The Firebird Suite” (Igor Stravinsky) in the early 1980s, during the tenure of conductor Antal Dorati. She has performed on numerous occasions with the orchestra under the leadership of Neeme Järvi and current musical director Leonard Slatkin, in addition to Dorati. She has been a soloist with the Detroit Symphony in its Educational Concert series and with the Kalamazoo, Dearborn, Warren, Wayne State University and former Michigan Chamber orchestras.

“I’ve known her for 56 years,” says revered musician, composer and arranger Paul Riser, who is known for his exceptional contributions to the Motown label and has since worked with such international recording stars as Luther Vandross, Carly Simon, Mary J. Blige and R. Kelly. “Pat’s always been my first call, going back to the Motown days. She’s my go-to harpist because she has perfect pitch and a touch that nobody else has — on one of the most difficult instruments to play, no less. She has a sparkle.” Among the Riser projects she added that sparkle to are Kem’s 2014 CD “Promise to Love” and songs for a gospel compilation featuring artist Derrick “Doc” Pearson, which is slated for release later this year.

“Patricia is the longest serving member of the Michigan Opera Theatre Orchestra,” says DiChiera. “Her musicianship is impeccable and harp solos are beautifully delivered. Her wonderfully warm personality adds measurably to the warm comradery within the ensemble.”

On retiring from Cass in 2007, Terry-Ross followed the path her mentor Velma Froude set, giving the name of one of her students, Lydia Cleaver, to fill her shoes. Terry-Ross has continued a circle of learning that acknowledges legacy as a living thing which can only grow when ideals, values and lessons persist from one generation to the next.

The Kresge Eminent Artist award is an unrestricted grant and is given annually to an artist who has lived and worked in Wayne, Oakland or Macomb counties for a significant number of years. In addition to the cash prize, the award includes the creation of a monograph commemorating the artist’s life and work, which is distributed to the public for free.

The 2017 recipient was selected by the Kresge Arts in Detroit Advisory Council, a volunteer group of leaders in the metropolitan Detroit cultural community. Its members are: