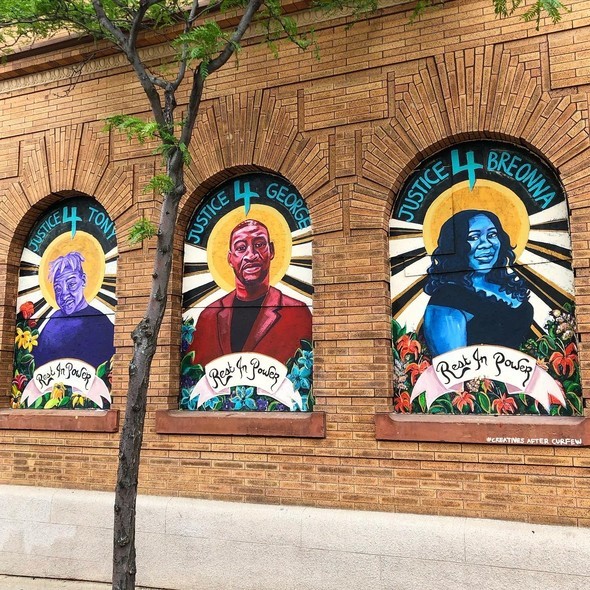 Photo courtesy of Leslie Barlow from Creatives After Curfew.

This is probably the most difficult question to answer as the recent community unrest has demonstrated to us that many Minneapolis artists have played and are still playing important roles in supporting community in many different ways. What we saw demonstrated here in Minneapolis during the civil unrest were community based artists rushing to support the protests and contributing their skills and resources to amplify the voices of marginalized communities. Now that the protests are largely over, artists have turned to using their resources to support communities to address their own healing on their own terms. One project that is a good example is Harvest Feast led by Keegan Xavi and Sayge Carroll. This project involved creating and serving a harvest feast as a radical act of caring and support. The project engaged residents who live on the southside and northside of Minneapolis within blocks of the violence and destruction.

Artists served a special meal, on beautiful artist-made table settings and organized performers to serenade neighbors as they dined in their front yards. Both artists live in these communities which have food insecurity issues and these issues were amplified by COVID and then exasperated by the destruction of local stores during the uprisings. While this project was funded by the CCM Creative Response Fund, we simply stepped in to help increase and extend the scale of the work that was already being planned. The project went very well, so much so that neighbors then organized their own project with the aid of the artists. They called their project Release It and it involved action painting using paint filled balloons in a public space to help release stress and tension. The reason this project sticks in my mind is because it was intimate, beautiful, responsive and deeply caring. It grew organically from one event to several events and demonstrated how artists use their skills to weave community relationships, build social cohesion and help communities heal on their own terms.