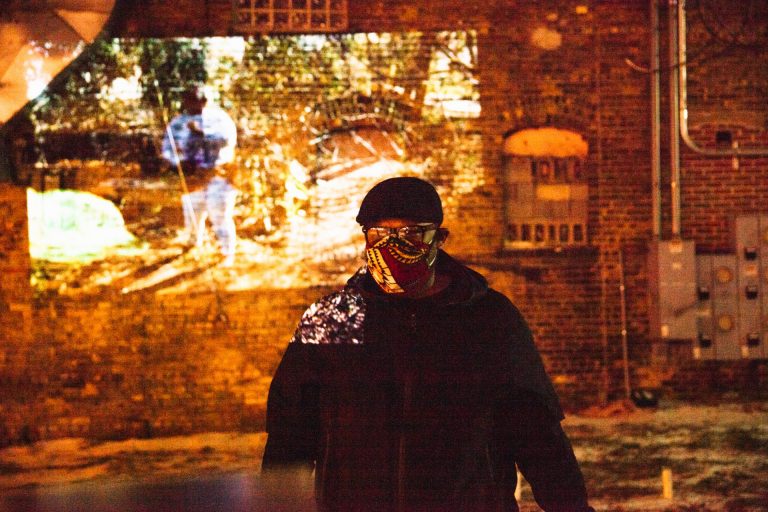 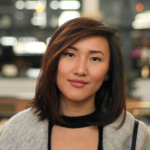 Editor’s note: This Q&A feature is part of a series of articles highlighting 10 Minneapolis artists who turned to their community to create a ripple effect of connection, healing and joy following George Floyd’s murder and the subsequent uprisings. Click here to read additional articles in the series.

In the summer of 2020, the Office of Arts, Culture, and the Creative Economy of the City of Minneapolis, Minnesota repurposed grant resources provided by The Kresge Foundation’s Arts & Culture Program to support 10 urgently-needed artist-led creative healing projects in the wake of George Floyd’s murder. Arts Midwest is collaborating with the City to disburse project funds.

One of these projects is excited delirium, led by artist D.A. Bullock. This multimedia piece projected videos of Black artists and performers onto damaged or destroyed spaces in North Minneapolis and the Bryant Central Neighborhood.

Teeko Yang, Project Manager of the City of Minneapolis’ Creative CityMaking program, interviewed D.A. Bullock about power dynamics, building toward the future, and creating spaces for the community to celebrate and mourn. This interview has been edited for length and clarity.

“I want folks in the community to ask questions and not just assume that the development of these spaces is going to happen without them.”
– D.A. Bullock

I’m D.A. Bullock. I’m a media arts artist and filmmaker. I’m originally from Chicago and have been working in the Twin Cities as what I consider a community artist since 2011, living in North Minneapolis.

I was a former Creative CityMaking artist with the City of Minneapolis in 2015. I was embedded in the Neighborhood and Community Relations department, which is the community engagement department of the city. Another artist and I worked on a project called the Blueprint for Equitable Engagement.

We were trying to do a few things with the project. Generally, community engagement in Minneapolis been a very “one way” sort of invitation and engagement. It really was arranged around who was able to show up at a certain time of day in a certain place.

We wanted to upend that whole notion and approach it from an artist standpoint, which is that the way you do community engagement is you develop a relationship with a community. We wanted to take the idea of a public comment and take it out into the streets.

We built this thing we called the Equity Pulpit, which was like a movable mobile podium, and took it out to places like Northside FLOW. We took it out on streets and corners and let people have their opportunity to do public comment like in a city council meeting but actually out on the street.

Then, we created films where a lot of these comments were pulled together. It allowed the community to have their own representation, and to show up the way they wanted to show up, versus that sort of confinement of, “You have to have the courage to step in front of a city council that’s sitting above you, and then speak your piece to the city.”

We wanted to even out the playing field, the power field, when it comes to that kind of engagement, so that was our project.

How did you come up with the idea for this Creative Response Fund project? Why does this project feel important to you right now?

This project is called excited delirium, and that name was taken from this terminology that’s been used by police throughout the country in order to justify a lot of their actions like chokeholds and other things that have put civilians in harm’s way. They blame this term, “excited delirium”, saying that the victims of police violence have been in this sort of altered state. They claim that people in this state have extraordinary strength and an inability to be detained by any means other than these extraordinary means.

I wanted to take that concept, which has been debunked by scientists, and apply it in a way that sort of re-envisioned what those two words could come together to mean.

I lived some time in New Orleans, and when someone passes away in New Orleans, they do a procession called the second line. It’s a celebration. And they’re walking down the street playing music, people are dancing, and you’re celebrating a life as you’re mourning the life at the same time. I wanted to apply that type of healing energy and purpose to what we’ve experienced as a result of the murder of George Floyd.

That was thrust upon us, and we all felt that collective trauma, pain and heartache. We didn’t have a lot of ways to express that, or to work toward the healing of that. We haven’t had a trial; we haven’t had an adjudication of what those police officers did. We had a lot of uprising based on the emotion of what happened, but we didn’t have a lot of opportunity to do that second line, that collective healing, that opportunity to celebrate a life as well as mourn a life.

So that was the emphasis of the project and the idea, and how it came into my head.

What is your connection to the community you were working with, and why is it important to you?

It was important for me to work in those two smaller communities and neighborhoods because of their connection to what happened with George Floyd. Both communities had to bear the brunt of the emotional response, the uprising, with the fires and the destruction of property that’s happened as a result of the murder of George Floyd.

I felt like those spaces were an appropriate geographical place to have the projections and do this sharing, because they also hold the memories of neighbors and families that lost loved ones in the past that aren’t as famous as George Floyd and aren’t acknowledged in the same way.

What was the outcome of this project? And what made it successful?

It was successful in that it really fulfilled the goal of connecting with people but still keeping them safe in a pandemic. I think that projection is really fantastic because you can be a passerby in a car or walking by and still engage with it. We’re trying to do a collective healing, but you don’t want to put people in harm’s way by gathering unnecessarily.

By doing it in wide open public space, people notice the projection and sometimes they stop and comment, and sometimes they don’t. But I’ve gotten comments from folks who said, “Yeah, I came by and I drove by and I saw it, and I was touched,” as well as people who actually stopped on the street.

It felt good. It felt right. It felt appropriate to be in those spaces that had suffered a lot of damage as a result of the uprising. And that was the reason why I chose those spaces, too. I wanted to give the impression of something else that could be. It is almost an impression of the future of those spaces, or what they would be, as opposed to what they just are right now in their damaged state.

What is has the response from the community been like?

Quite a few people passed by and asked, “What is gonna happen with the space?”

I didn’t have an answer for them, but I thought that question, being so foremost on people’s minds, was important to me. We were thinking about the future. We were almost collectively envisioning what the future might hold.

I want folks in the community to ask those type of questions and not just assume that the development of these spaces is going to happen without them. I think that’s been their assumption. There’s a lot of historical trauma that hasn’t been dealt with.

The question, “What are we gonna build here?” that’s about the future of policing, too. How is that activity gonna be reformed to the point where they’re not killing Black people? The question of “What are we building?” can apply in a very practical sort of way, but it also can apply to a visionary philosophical place, as well.

I really thought about the question, and it almost took my breath away. “What’s being built here? What are we building?”

What does creative healing mean to you?

Creative healing, to me, is an opportunity to use our ways of expression. Even if you don’t consider yourself an artist, I think we are all always looking for ways to express ourselves, and ways to deal with the world around us. And I feel like creative healing is stretching the boundaries of what we consider healing. Healing doesn’t work the same way for everyone, and everyone takes their own time in that, and then everybody, frankly, doesn’t have access to the same kind of healers.

Arts has always been therapy for me, and I know that that’s not uncommon in my community. Therapists and people to talk to about my pain and suffering weren’t really available. So that was something I had to just keep internalized and sort of struggle through as a solitary individual. Creative outlets gave me an opportunity, whether that be music, or film, or writing, or spoken word poetry. It gave me an outlet for healing personally, the type of healing I didn’t have access to in an institutional way.

What are your hopes for the City of Minneapolis moving forward?

I hope we don’t just try to weather the storm. What I mean by that is, these types of things have happened in the past, and our approach to healing has been whether we can survive it and get out the other side in relatively in the same shape as we were before. My hope is that we don’t take that approach this time.

We’re actually trying to inspire people to be better off when we come out the other side, knowing that things are actually changing. So that the relationship between whatever law enforcement we’re gonna have and the community is not waiting for the next tragic event to happen, but it’s actually building and healing toward a better future. We need more accountability in the system, and to alleviate some of the oppressive things that have been around for a very long time, around poverty, and just the difference in equity amongst different folks who live in our city. I hope we really address that and do something about that to make it change.

I don’t want to be an artist, five years from now, approaching another creative healing project because we’ve done the exact same thing and somebody else is dead, and we’ve had another uprising. I want to be able to know that this response catapulted us to this next level where we’re actually living better and doing better for each other. That’s my hope.

Creative CityMaking is a program of The Office of Arts, Culture, and the Creative Economy at the City of Minneapolis. Funding is provided by The Kresge Foundation. Arts Midwest is acting as fiscal agent for the disbursal of grant funds.