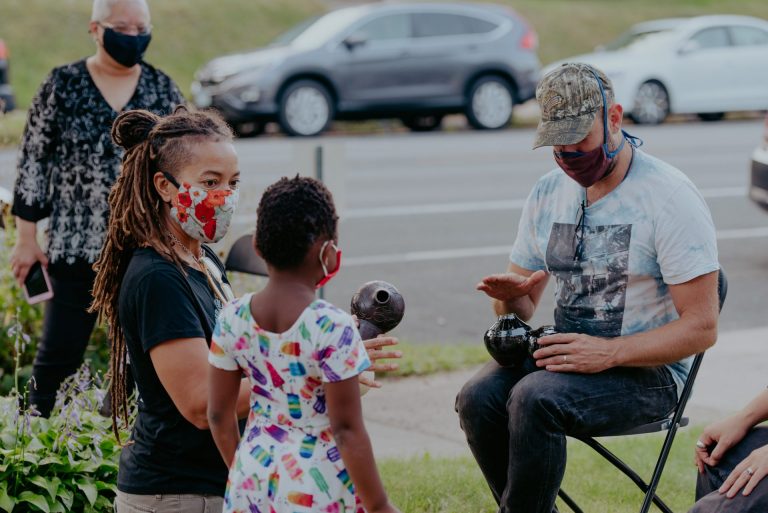 Neighbors connect during a Harvest Feast arts event in Minneapolis, one of 10 artist-led creative healing projects launched in the wake of the death of George Floyd. Photo By Pierre Ware.

By Teeko Yang, Project Manager of the City of Minneapolis’ Creative CityMaking Program

Editor’s note: This Q&A feature is part of a series of articles highlighting 10 Minneapolis artists who turned to their community to create a ripple effect of connection, healing and joy following George Floyd’s murder and the subsequent uprisings.

This fall, the Office of Arts, Culture, and the Creative Economy of the City of Minneapolis, Minnesota repurposed grant resources provided by the Kresge Foundation to support 10 urgently needed artist-led creative healing in the wake of the death of George Floyd. Arts Midwest is collaborating with the City to disburse project funds. One of these projects is Harvest Feast, led by artists Sayge Carroll and Keegan Xavi. Harvest Feast connected neighbors in two Minneapolis communities with a series of events that focused on art, healing, and food.

Teeko Yang, Project Manager of the City of Minneapolis’ Creative CityMaking program, interviewed Keegan about the ripple effect of working with your immediate community and creating opportunities for creative release. This interview has been edited for length and clarity.

My name is Keegan Xavi. I’m a multimedia artist based on the north side of Minneapolis. I’m a visual artist, doing collage and photography and some documentary film, and then I’m also a community artist. I use creativity to address issues and for fun. I worked on this project with Sayge Carroll. She’s a ceramic artist, so everything that she creates as an artist is both functional and beautiful and has these spiritual connotations. We just have a synergy when it comes to working with our community through the arts.

Sayge and I were part of the 2015 Creative City Road Map project. It was the first time we got to work together. It was a really amazing project. We gathered information for a roadmap that was being created about creative needs in the city. What I enjoyed about it—and why they picked us—was because it was about going into communities that aren’t often reached when it comes to getting opinions and feedback in city processes.

How did you come up with the idea for this Creative Response Fund project?

We received a request for proposals from the City of Minneapolis asking for ideas we had around community healing and resiliency regarding what happened this summer.

What a summer, right? We had the murder of George Floyd, which sparked off this uprising, internationally and within both of our communities. Sayge lives at 40th and Chicago, two blocks away from where that happened. And then I live two blocks away from Broadway on Lyndale in North Minneapolis. Our neighborhoods separately and collectively just came together to take care of each other during that time. It happened organically, and it often came through spontaneous art-making. So when we read the City’s request for proposals, we were like, “We’re kind of already doing this.” This project really just formalized some of the things that we had already been doing.

What did you end up doing for the project?

Our proposal was to create events, one in North Side another in South Side, that would happen simultaneously. First, we did two tiny art events, one in my backyard, and another in Sagye’s backyard. At my place, we worked with Amoke Kubat from Yo Moma’s House. She led a workshop with projects like making face masks. One neighbor is a textile artist who does custom shoes—so he brought out his paints and his shoes. Somebody else likes to work on ceramics and does calligraphy on ceramic tile. It was this really beautiful spontaneous event that happened, based around creativity, but there was healing and connections were made. The Harvest Feast is actually something that Sayge has been doing in her own backyard for the past like four years. So, obviously COVID-19 changed how she’s had to do things, when you can’t gather. We decided to not do a big feast, but we did plan a smaller, socially distanced event that took place at the same time on the same night. We hired a professional chef, Dunston, and he prepared meals for both parts of town. We learned some things about coordination that night! One of the things that we had written into our proposal was that we had wanted to compensate our neighbors for participating as artists. We were giving them a certain amount of money to come to both events. However, not every neighbor could make it to both events. To make it fair, so everyone felt like people were compensated for their work, we talked about it as neighbors and decided, “Hey, there’s enough money that we could pull off another event.”

I turned it over to my neighbors to produce it, and they came up with their own idea that was just awesome. It was called Release It, and we went to the thrift stores and the Walmart and made these contraptions in the backyard. There was this idea of writing feelings on water balloons filled with paint and you throw them on a sheet. It turned into something else where people just ended up squirting paint out of the ketchup bottles all over the sheet. But because nobody really knew what we were supposed to be doing, it was just fun.

The conversations that came after that event really stunned me. It was somebody’s birthday in my building, so they had family coming by the backyard. They were like, “We don’t know what’s going on, but we wanna participate.” I came to find out that one of the women, she has late-stage cancer. I was talking to her that day and she said, “I haven’t had this much fun in a while, this feels so good, just to throw some paint.”

I didn’t even realize till later what she was going through. There were a lot of people going through things. I think we created an event that helped people release what they’re feeling.

Since then, one of the neighbors who produced Release It, has been really inspired by conversations with Amoke Kubat from Yo Mama about how she uses art and healing practices to support mothers. Now, he’s looking to how he can create similar events for Black fathers through the arts. So, that’s something great that’s spinning off from this project.

What is your connection to the community you were working with, and why is it important to you?

Sayge and I both decided to connect with the communities that are in our immediate vicinity. The people that, if there’s an emergency, we’re gonna call on them for help or for a cup of sugar. That was the community we wanted to start with. There’s a ripple effect that happens from just working with the people around you intimately. You know that it’s gonna spread. I could see with my own two eyes how it spread through the building here. I think if everyone just started with their own block, we’d see a lot of progress quickly.

What was the outcome of this project? And what made it successful?

The outcome of the project was three successfully completed events. And what made them successful is that they increased the bonding and solidarity among neighbors through food, through laughter, through fire, through storytelling, through art. We said that that’s what we were gonna do, and that’s what we did.

I think the success in it is that it has inspired others to want to see this happen in their own communities. And then we’re hoping then those people that they reach will wanna create the same things for other communities we don’t know about.

What are your hopes for the city of Minneapolis moving forward?

My hopes are that the city continues to fund projects like this and continues to find ways to access other pockets of people and communities who don’t have access to the Internet. I think I’m the only person in my building with a laptop. I would like to see the city figure out ways to reach out to this raw talent that’s not being accessed. People are already doing [events like Harvest Feast] on their own. It’s kind of Stone Soup style, you bring your art supplies, you bring your food. But if people knew that you could get funding to do this and you can get funding to produce more events, that would be huge.

Creative CityMaking is a program of The Office of Arts, Culture, and the Creative Economy at the City of Minneapolis. Funding is provided by The Kresge Foundation’s Arts & Culture Program. Arts Midwest is acting as fiscal agent for the disbursal of grant funds.