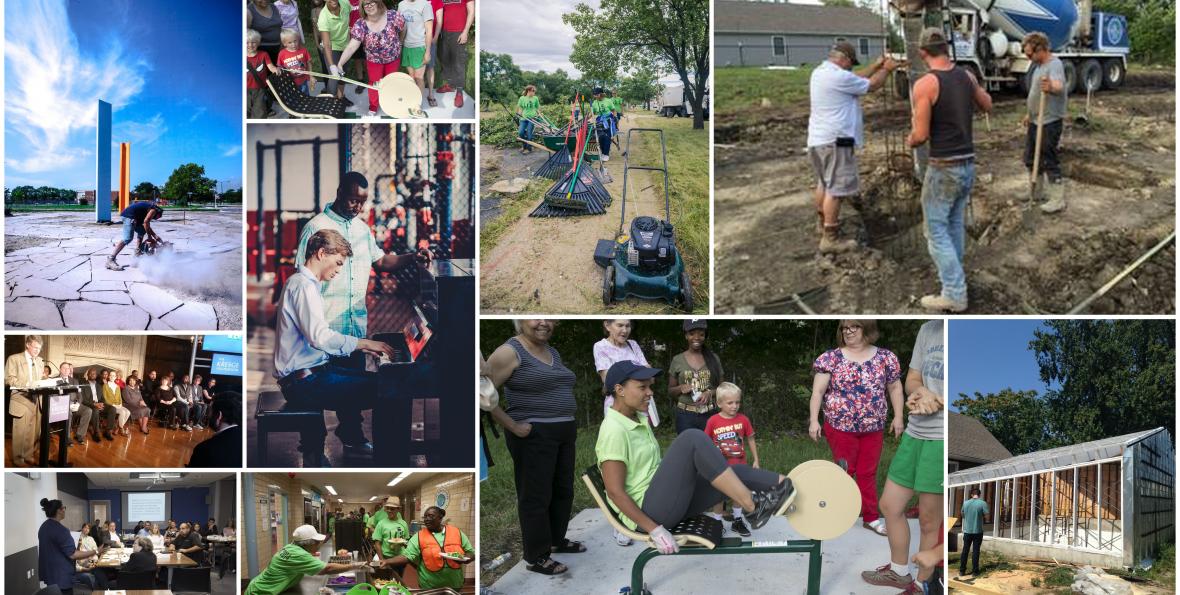 The Kresge Foundation has committed an additional $6 million over the next three years to spur and support neighborhood projects across its hometown through Kresge Innovative Projects: Detroit.

The commitment builds on a three-year, $5 million pilot initiative that supported 40 projects and 16 planning efforts in 2015-2017.

KIP:D projects have ranged from the revival of empty or underused buildings as neighborhood hubs to the reclamation of blighted properties as greenways. Projects have made neighborhood streets and sidewalks friendlier to bicyclists and pedestrians; they have spurred artist-neighbor collaborations in parks, engaged youth in neighborhood revitalization efforts and supported the creation of rain gardens and bioswales.

“KIP:D has tapped into the visions of Detroit residents for projects that strengthen neighborhoods and improve the quality of life. The outpouring of interest in grassroots change confirms our belief that neighborhood residents have the imagination and verve to make change. What they need is financial backing and technical support,” says Wendy Lewis Jackson, managing director of Kresge’s Detroit Program.

First-step applications for 2018 will be accepted through Kresge’s online FLUXX system through Feb. 13, after which selected applicants will be asked for additional information. Kresge expects to announce between 10 and 20 grant awards in May. A similar timeline is planned for 2019 and 2020.

“Our goal is to meet Detroiters and their organizations where they are,” says Jackson, regarding the streamlined application process, increased flexibility and technical support. “We’ve had numerous meetings with past KIP:D grantees as a group to find out how we can better help them with the important work that they are undertaking. What we learn shapes our approach on an ongoing basis.”

Jackson emphasizes that KIP:D complements an array of Detroit Program initiatives that promote the revitalization of city neighborhoods, the engagement of residents in that work and the capacity of neighborhood organizations to bring it about.

“Moving the energies of revitalization into neighborhoods across the city is the most important goal for this phase of Kresge’s work as it undeniably is for the city,” says Jackson.

Kresge’s neighborhood efforts in Detroit include support for specific areas of the city (such as the Livernois-McNichols area and the stewardship of the Live6 Alliance there), support for organizations that work across the city (such as Michigan Community Resources, Data Driven Detroit, Detroit Future City and Community Development Advocates of Detroit), and support for the operations and projects of neighborhood-based organizations across the city.

Last summer, Kresge announced $3 million in operating-support grants over three years to 21 neighborhood-based organizations across the city. That initiative also complements and grew out of feedback from KIP:D grantees.

“These efforts and organizations reinforce one another and the city as a whole,” says Jackson.

Application to KIP:D is limited to organizations that are at least 2 years old, located in and primarily serving Detroit and that have either 501 (c)(3) nonprofit status or are part of a college or university. These entities may also submit applications for collaborations with individuals and with religious congregations, for-profits and other organizations that are ineligible to apply on their own.

“The goal is to tap into the widest array of inspired community-builders as possible,” says Bryan Hogle, Kresge Detroit Program officer. “Collaborations broaden the pool of ideas and capabilities that KIP:D can support.”

To that end, Hogle says the Detroit Program is encouraging projects that incorporate aspects of health, arts and education.

And, he adds, the Detroit Program particularly hopes to receive applications from smaller organizations whose leadership reflects their neighborhoods.

“Engaging with organizations that reflect the city’s demographics and are rooted in its cultures is one of our priorities,” adds Hogle.

As part of the outreach to potential applicants, the Kresge Detroit program has scheduled information sessions  to help applicants develop their concept proposals:

Watch a short video on the new KIP:D application process

Go to the online FLUXX system