Shooting Detroit’s lunch counters and auto shows, parks and grocery stores – decisive moment by decisive moment, Bill Rauhauser captured his times, and our city, for eternity. (Remarks at an event at the Detroit Institute of Arts honoring The Kresge Foundation’s 2014 Eminent Artist.)

Delivered on March 24 at a dinner at the Detroit Institute of Arts for the 2014 Kresge Eminent Artist Bill Rauhauser.

Thanks to all of you for being here this evening. This is truly one of the most enjoyable annual events for The Kresge Foundation.

In our Eminent Artists we honor exceptional lifelong achievements and contributions to the cultural vitality of metropolitan Detroit.

I’m honored to look around this room and see poet and playwright Bill Harris and the poet and publisher Naomi Long Madget. We’ve also honored opera impresario David DiChiera, jazz master Marcus Belgrave and the visual artist Charles McGee. Each has held up the mirror of art to our community and taught younger generations to embrace the same standards of excellence.

As you’ve seen in our slide show, if you hadn’t seen before, Bill’s genius is to capture for posterity fleeting moments in the hurly-burly parade of humanity. He photographs people whose faces, whose body language, whose way of moving in the world captures our attention and prompts us to pause, to think, to wonder.

Sometimes he shows us urban grit we can’t ignore. His preference for black and white makes us all the more aware of the human geometries of light and shadow that last no more than the blink of an eye.

Every year as part of honoring the Eminent Artist, we produce a monograph of the artist’s career. And every year we find that these artists have led richer lives than we imagined, made contributions to their art and their community far deeper than we initially understood.

In Bill’s monograph – available later this year – we’ll tell you a story about a Detroit kid who bought his first camera for 39 cents during the Depression, traded a stamp collection for a better camera and found the course of his life forever changed.

While he pursued his first career as an architectural engineer, Bill honed his craft on the side. He became a disciple of the great French photographer Henri Cartier-Bresson. He took to heart Bresson’s belief that the photographer is a poet of “the decisive moment.” And to capture those decisive moments in the streets, Bill has come to his own three iron rules: Be there, be ready and be lucky.

In his 30s, Bill saw one of his photos chosen for Edward Steichen’s “The Family of Man,” which is still hailed as the most important photo exhibition of all time. In his 40s, Bill was a leader in forming – here in Detroit – what is argued to be the nation’s first gallery dedicated solely to photography. That gallery was yet another significant step in the elevation of photography from the realm of hobby to the realm of art. 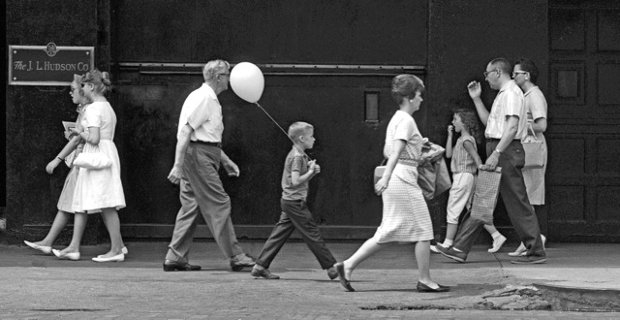 In his 50s, Bill found a new calling at what is now the College for Creative Studies. After four years of teaching at night, he cut short his engineering career to teach full time. He conveyed technical knowledge, sure; but he put his stress on the soul of the work. Along the way, he was instrumental, too, in helping the Detroit Institute of Arts, where we are gathered, build its original photo collection.

He shot lunch counters and auto shows, parks and grocery stores. He shot street life in endless permutations. We asked Bill to do some math for us. He says he has probably shot on the order of 72,000 images. And yet, at a fraction of a second each, think about how little time that amounts to. Those fleeting, precious moments. We estimate that could amount to less than 15 cumulative minutes his shutter has been open across his 80 years of shooting. But in those minutes, decisive moment by decisive moment, Bill has captured his times, and our city, for eternity.

It is my pleasure now to ask you to raise your glasses for a toast. The advice to “Be there, be ready and be lucky” applies to more than street photography, and we are eminently lucky to have Bill Rauhauser as Kresge’s Eminent Artist for 2014.

See a slideshow of some of his work.