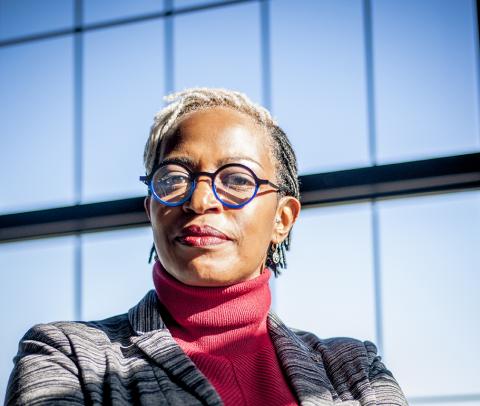 Denise Smith, a veteran early childhood educator-administrator-leader whose experience began as an in-home provider 26 years ago, was announced today as the implementation director for Hope Starts Here, a coalition and framework to transform early childhood education and services in Detroit.

A year-long engagement process involving 18,000 Detroiters lead to adoption the next year of the Hope Starts Here framework to make Detroit “a city that puts children first” by 2027. Kresge and Kellogg committed $50 million following the adoption of the framework; advocates have been working since to advance a half-dozen imperatives identified in the framework through collaboration and coordination among Detroit’s early childhood partners.

“Denise’s experience leading community-rooted efforts and her orientation to facilitate collaborations and partnerships make her the ideal person to advance this vital framework for Detroit children,’’ said Rip Rapson, president and CEO of the Kresge Foundation.
Rapson and Tabron will introduce Smith on Friday in her new role at a Hope Starts Here summit on the campus of Marygrove College. Several hundred early childhood advocates are expected to attend.

“Denise’s deep, personal commitment to children, families and community, and her visionary leadership will accelerate the Hope Starts Here implementation,” said Tabron. “We have made strides already, but the clock is always ticking for young children. We need to do more to place Detroit’s children at the center of civic decision-making.’’ (Read a profile of Smith here.)

Partners working to advance the work of Hope Starts Here will share accomplishments across the imperatives and sharpen plans for moving forward on all of them to reach Hope Starts Here’s ambitious 2027 goals. The summit will bring in nationally renowned speakers, as well as local early childhood leaders, to engage with families and partners about how to best advocate for and support Detroit’s young children.

“I’m excited to become the catalyst, the person who makes sure we get to the outcomes that have been laid out in the Hope Starts Here framework and that children and families in Detroit deserve,’’ said Smith of her role, a first for Hope Starts Here.

Smith has left a position as the executive director of the Flint Early Childhood Collaborative and Educare-Flint to work full-time on Hope Starts Here where she had previously been an unpaid member of its stewardship board, an advisory body consisting of 23 community leaders and early childhood advocates.

As the Hope Starts Here implementation director, Smith will report directly to the stewardship board. Her top responsibility will be to advance the priorities in the Hope Starts Here framework with its partners, who have been pursuing its imperatives since their adoption two years ago:

“We will gather at our summit on Friday to report progress on and share plans for the imperatives,” said Smith. She said the summit will launch a new campaign for individuals to declare themselves as “Champions of Hope” committed to the effort.

Smith said the summit will also spotlight a campaign by the organization Impact Detroit to promote a prescribed set of six activities that parents, teachers and caregivers can practice daily to enhance the development and well-being of small children.

Based on research from the Harvard Center on the Developing Child, the Six-a-Day campaign prescribes encouragement, talking, reading, hugging, singing and playing.

“The prescription might seem simple, but it is also practical, and research says these activities have an enormous impact,” said Camarrah Morgan, Community Engagement Coordinator for Impact Detroit.

“We have enrolled 165 households and expect to bring our total to more than 500 in the next nine months through a community engagement and outreach campaign,’’ said Morgan, who added that she looks forward to sharing more about the effort at the summit.

Prior to her stint with Flint Early Childhood Collaborative and Educare-Flint, Smith directed Great Start to Quality, the online resource tool that helps Michigan families find quality childcare and preschool options. A native Detroiter, her other past positions include vice president of early childhood at Excellent Schools Detroit, a coalition of education, civic and community leaders.

Her career began with a stint as an in-home service provider and includes work as a grassroots early learning advocate and a Head Start director in Detroit’s Brightmoor neighborhood – all the way to the state’s capitol.

“Having an early childhood system that is not only responsive to the needs of families but is coordinated and accessible is critical to creating hope and change,’’ said Smith. “We have all the right pieces in Detroit to make it happen.’’

“The fact that 28,000 Detroit children lack access to quality childcare is just one measure of how far we have to go,” said Smith.

“This is my home,’’ Smith said. “I’m excited on behalf of all families and children to help get Detroit to the outcomes that have been laid out in the Hope Starts Here framework.”

Friday’s day-long summit on the campus of Marygrove College a morning groundbreaking for a new $15 million early childhood center,  part of an emerging P-20 cradle-to-career vision for the campus anchored by the Marygrove Conservancy with partners including Starfish Family Services, Detroit Public Schools Community District, University of Michigan School of Education, Marygrove College, IFF, the Detroit Collaborative Design Center and The Kresge Foundation.

The early childhood center, set to open to serve 144 infants, toddlers, preschoolers, and their families in 2021, exemplifies the high-quality early-childhood offerings identified as community needs by the Hope Starts Here process.

In September Detroit Public Schools Community District opened The School at Marygrove to 120 incoming ninth-graders as its inaugural class in the campus Liberal Arts Building. Grades will be added incrementally until the school becomes a full K-12 institution.

The P-20 campus is expected to serve roughly 1,000 students when its full capacity is reached.

Kresge’s $50 million community investment on the campus of Marygrove College in northwest Detroit is the largest philanthropic investment into a Detroit neighborhood in the city’s history.