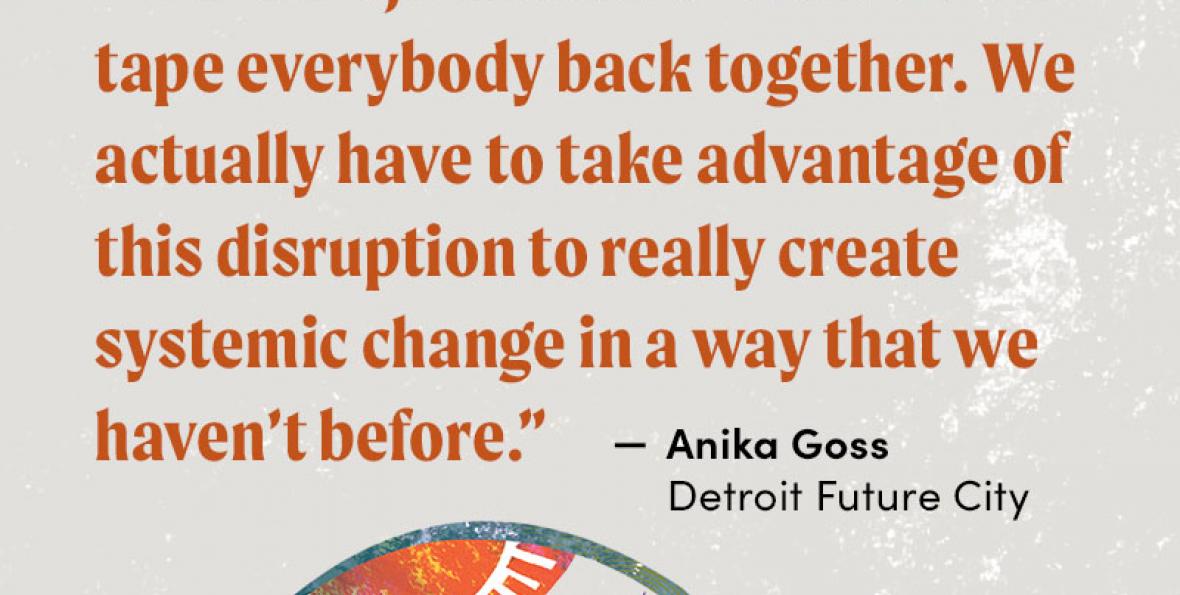 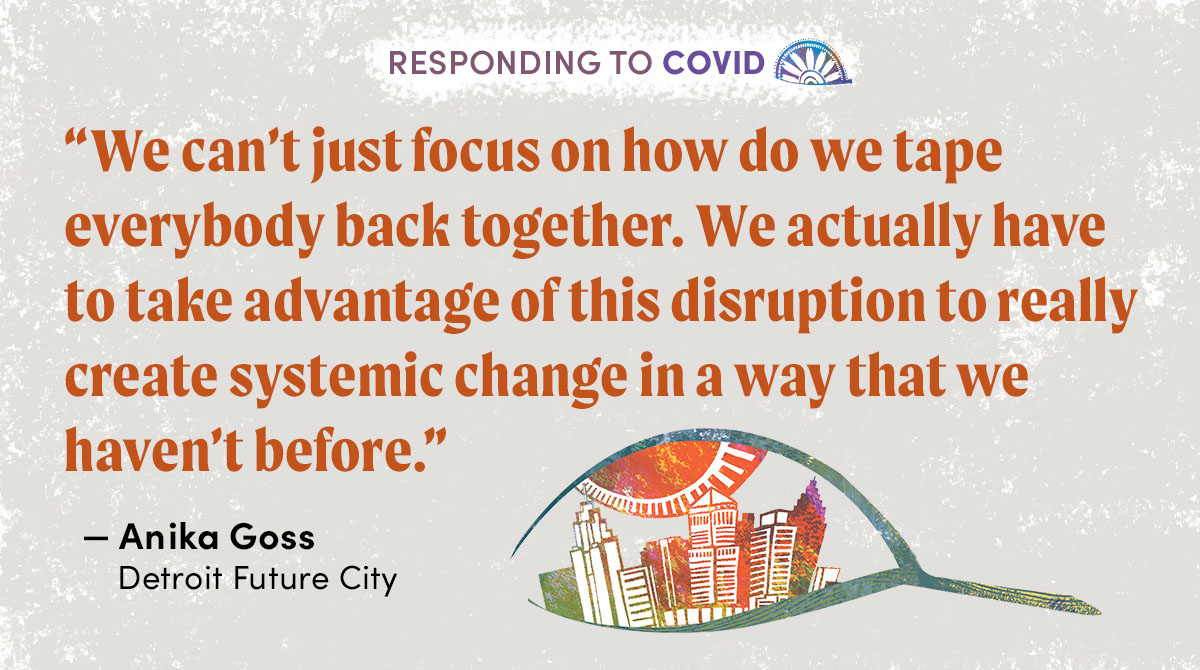 Editor's note: Since March, Kresge partners have responded to COVID in inspiring ways. Over the next few weeks, we are profiling eight such partners, who are also featured in our upcoming annual report on racial equity, Inside Out & Outside In.

As many entities that do work similar to Detroit Future City (DFC) have found, the twin  occurrences of the COVID-19 pandemic and Black Lives Matter protests created a laser focus on issues of economic justice and inclusion.

“It’s amazing that in January we were really having to explain to people why this was important,” DFC Executive Director Anika Goss said in late June. “Now it has become visualized, and it’s all around us.”

She noted that more attention does not necessarily translate into immediate action. “What was really frustrating me was, OK, so we’re now into yet another economic crisis here in Detroit,” Goss says. “If you are an African American small-business owner, you are also likely to be sick, to be financially vulnerable, to be digitally excluded and to have your business on the verge of failure.”

So solutions will require something new and perhaps not yet defined.

“We can’t just focus on how do we tape everybody back together,” she says. “We actually have to take advantage of this disruption to really create systemic change in a way that we haven’t before.”

Working remotely during the pandemic didn’t stop DFC staff from achieving a couple of milestones.

In June, the nonprofit announced the hiring of Ashley Williams Clark as the director of its recently formed Center for Equity, Engagement and Research. With more than 10 years of experience in public policy research and analysis, community engagement, program development and project management, she had most recently worked on the City of Detroit’s Housing and Revitalization Department public-private partnerships team.

Clark is focusing on establishing a common definition of economic equity in Detroit, creating an equity indicator dashboard and engaging civic and community leaders and residents around the effort.

Goss says her impact was immediate.

“She jumped right in, brought new resources that we hadn’t even considered,” Goss says. “Having her on board not only gives capacity and structure to this work, but it gives leadership. She’s an experienced leader in this area, which is what we want.”

Also in June, DFC produced a 16-page report on the impact of COVID-19 on Detroiters. The city was an early hot spot for infections, and poorer residents of color were affected more severely. As the report states, “We must acknowledge that the previous ‘normal’ was vastly inequitable and that the most recent crisis has left many more vulnerable. This is also an opportunity to address these inequitable systems through policy changes that can lead to a more resilient and equitable future for all Detroiters.”

Trying to advance that work while social distancing often has presented some frustrations.

“Everybody I talk to is pretty worn out,” she says. “There is a lot of solidarity in being in this work and feeling overwhelmed and frustrated.”

And since many new civic and corporate players are stepping up for the first time and expecting a leadership role, Goss finds herself gently educating her audience.

“There is a level of patience that is required when we say this is actually what we’re talking about when we say ‘equity,’” she says.

But meeting via Zoom has delivered surprising benefits, too. Time with corporate leaders used to mean sitting around a boardroom table with everyone in business attire. Now she sees those same executives online wearing casual clothes and sitting in their homes.

“It becomes much more personal, and so your workplace defenses are down,” she says. “This isn’t business as usual, and I think everybody is recognizing that.”

John Gallagher is a guest writer. Learn more about Detroit Future City in Kresge's upcoming report on equity, Inside Out & Outside In. Coming mid-Spetember.