Richmond youth use art to push for an end to incarceration 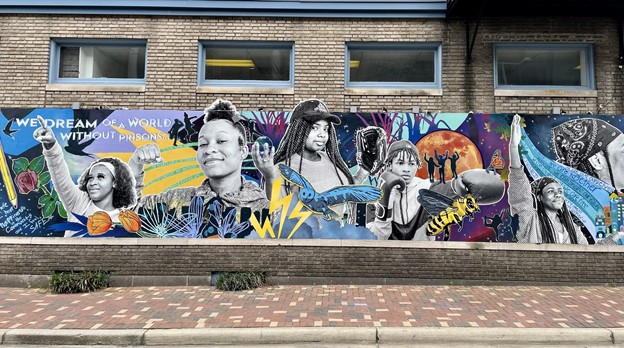 Editor’s note: This story was first published by Next City

“In the world without youth prisons I walk down the street and I hear happiness in the community—no fear, no violence, no cries, no sirens. I see communities thriving, outreach available. Children being healed instead of hurt. Families growing together instead of being torn apart. I see a community that is working to build with the people rather than against them. I see youth becoming who they are destined to be. I see money that would have been going toward putting youth in cages that is now being put into the school system, into jobs, into support for kids. We can shape our future. We can finally heal. We are free.”

The poem read aloud in front of Richmond’s mayor and the large crowd gathered at City Hall this summer may sound like a utopian vision to adult ears, but the youth voices calling for an end to incarcerating kids weren’t daydreaming; they were conjuring a future they are working to build. To make that vision a reality, the teenagers working with Performing Statistics — a Virginia-based youth prison abolition nonprofit and member of Kresge’s Culture of Justice cohort of grantees — are using art to paint a better world for policymakers. Through murals and larger than life art installations, these young people are building support for a real-life justice system that prioritizes healing over punishment.

In a city chock full of murals, it can be hard for a new piece of street art to stand out in Richmond. That cannot be said of Performing Statistics’ public art projects, which include a half-block long mural and two 160-foot-tall banners which dominate the downtown skyline. The painting—Freedom Constellations: Dreaming of a World Without Youth Prisons—is an interactive installation replete with flashing lights, voice recordings, and augmented reality visuals. Last November, Performing Statistics unveiled the mural mere blocks from the Virginia State Capitol in collaboration with CodeVA and RISE for Youth. Through a combination of flashing lights and automated audio that lures passersby to explore the painting’s interactive features, the installation has kept the city’s attention long beyond its celebrated debut.

In a behind-the-scenes documentary about the project, several of the kids featured in the mural shared their aspirations as to how art can help transform the conversation on justice and incarceration. “My hope is to give people who are incarcerated a voice on the outside,” says Khai in the film. “There is somebody out here fighting for a change. We created a mural about keeping kids free in the future. Public art is always going to be there. It can affect the future.” (All quotes from participants in this story came from publicly available videos and writing; Performing Statistics does not share participant information with anyone, as a rule, and did not make any youth available to this reporter.)

This past July, Performing Statistics took its mission of cultural organizing to new heights with two sixteen story-tall public art installations hanging off Richmond’s City Hall. The larger than life banners allow viewers to dive even deeper into the minds of the kids who created them. By holding up their smartphones to the installation, viewers can witness the murals come to life as they listen to the voices of Ta’Dreama McBride and Clyde Walker—two members of Rise for Youth—describe their vision of the investments and support required to build a world without a single child behind bars. 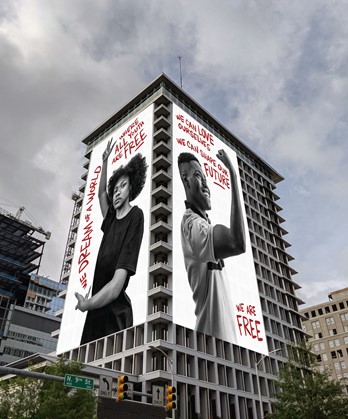 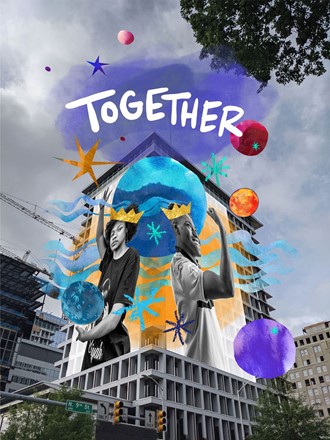 Both art installations convey powerful truths about youth incarceration in Virginia by leveraging augmented reality features to show viewers that an alternate reality is not just possible, it’s already there if only people choose to see it. In 2019, 17,283 minors were under the supervision of Virginia’s juvenile justice system with 350 of those being held in long-term state custody facilities. Although just 21.2% of kids in the commonwealth are Black, 70% of incarcerated minors in Virginia are Black—a startling and heartbreaking disparity.

According to another muralist included in the documentary, 15 year-old Iyana, the situation has to get better: “One day the world will be a future that we want, not this reality where people are getting incarcerated for no reason other than the color of their skin.”

In addition to its human cost, juvenile incarceration is just plain expensive. In 2019, Virginia spent $187,179 on each young person behind bars. In contrast, that same year the state only invested $12,931 per pupil in K-12 education. Although wrap-around services to provide for young people and keep them out of the justice system may cost more than doing nothing, they are far cheaper than the financial and societal costs of incarceration.

“Everybody’s mind isn’t going to be changed,” says Kidaya, another participant interviewed in the documentary, “But I think [this mural] can change some people’s minds because some people will see the hard work and the dedication that we have put into this project.”

All too often youth most impacted by the status quo don’t get a say in its continuation or reform. “The justice system is a revolving door for young people, so it was important for us to center the experiences of young people and use art to tell complex narratives while highlighting solutions that have yet to get the investment they deserve,” says Trey Hartt, Performing Statistics’ project director. “Our work has always been about how we can connect decision makers and policy makers to the personal stories of those impacted.”

Performing Statistics’ origin story goes back to seven years ago, when Mark Strandquist was working on the Windows from Prison project—a community art initiative that asked incarcerated adults what view they would like to see from their cell window. Armed with an answer, photographers would capture the desired shot and give a print to the prisoner to display on their wall.

That effort to bring humanity and empathy to the carceral system led Strandquist to become obsessed with one question: How would juvenile justice be reformed if it were led by youth? His search for an answer quickly morphed into a summer project in concert with a handful of art and justice nonprofits in Richmond, Virginia.

Strandquist reached out to Art 180 and the Legal Aid Justice Center (LAJC)—two trusted Richmond nonprofits—hoping for help to bring young people directly impacted by the juvenile justice system to the forefront of the conversation on how to reform it. Raw data and statistics may change some minds, but Strandquist saw a deeper need to humanize the issues through kids’ personal, creative expression.

“Young people may not be equipped to sit across the table from and speak with powerful leaders that may intimidate them, but they can always speak through their art,” says Hartt. “We work really hard to help young people present themselves not as victims but as the decision makers of the future. If we’re making policy choices and not including young people in those conversations, then as a society we are always going to be three steps behind.”

To make their first summer project a success, the coalition of groups brought on Gina Lyles—today the engagement director for Performing Statistics—and centered their work in the mission of LAJC’s newly launched campaign, RISE for Youth. Lyles’ background in hip hop brought to life a curriculum dedicated to dismantling the youth prison model via the promotion of community-based alternatives. The work won the team a $500,000 grant from the Robins Foundation, a sizable sum that would sustain their efforts for the next four years.

“That was a catalytic moment to show this was real,” Hartt says. “Clearly there was an appetite in the philanthropy world and the community at large. During those years we were learning how to exist in the policy world and RISE for Youth was learning how to operate in the art world.”

The marriage of the two approaches garnered a wave of new funding for their work. The Art for Justice Fund, the Public Welfare Foundation, the National Endowment for the Arts’ Creativity Connects Program, the Kresge Foundation’s Culture of Justice Award, and other smaller grants all became sustaining sources.

In 2019, Performing Statistics started a new chapter of their story by splitting off from ART 180 and LAJC to establish themselves as an independent 501(c)(3). The mission was the same —“to model, imagine, and advocate for alternatives to incarceration,” but their work went deeper.

That same year Standquist, Hartt, Lyles and the rest of their crew began running reëntry and immersion programs for previously incarcerated kids, created a youth ambassador squad offering workforce development skills, and provided 6-month long bridges of support that offered participants housing, medicaid enrollment, and comprehensive care. Over the two years since Performing Statistics rolled out those wraparound services, their team has helped dozens of kids break free of the school-to-prison pipeline. Whereas youth recidivism rates typically reach over 70%, not a single Performing Statistics participant has returned to a carceral facility and over 80% have avoided another arrest. Such unexpected success gave the group the confidence they needed to begin creating their own alternative to juvenile justice facilities entirely.

This new bold approach for Performing Statistics is their way of meeting the moment. “We were already on this path, but last summer we realized the community was ready to have conversations on abolition that we didn’t know people were ready for,” Hartt says. “We had always framed our work a bit softer so as to not alienate people, but now folks are regularly naming the problem of white supremacy which makes it easier for us to speak directly to the heart of the matter.”

Towards the end of the year, Performing Statistics plans to push the conversation on abolishing youth incarceration into classrooms and school board meetings across the country with their #NoKidsinPrison project—a new virtual reality film and immersive digital experience. Although top industry professionals put the film together, all of the ideas and art were designed and made by young people to convince the public that ending juvenile incarceration is a real goal.

The final frontier of Performing Statistics’ mission towards abolition is the development of “the Hive”—a community development initiative aiming to replace youth incarceration entirely. The planned campus will be designed by and for young people navigating the justice system and housing instability.

“When the Hive starts thriving our kids will help cross pollinate these bigger systems with practices of mindfulness, restorative circles, and healing,” Hartt says. “By modeling this world without prison, police, or incarceration to establish community safety, we will start to impact the way systems work in Richmond. You won’t be able to unsee this model.”

For now Performing Statistics is focused on launching a concept development process in partnership with Designing Justice + Designing Spaces and working with young people to begin designing a system of support that nourishes kids intersectionally.

“Young people don’t live in silos,” says Hartt. “When kids come to school stressed or hungry, they can’t succeed. These are all things people have asked for for generations. We want to pioneer a new way of designing our communities focused on restorative healing.”

Wyatt Gordon is a born-and-raised Richmonder with a master’s in urban planning from the University of Hawai‘i at Mānoa and a bachelor’s in international political economy from the American University in Washington, D.C. Follow Wyatt on Twitter at @yitgordon.