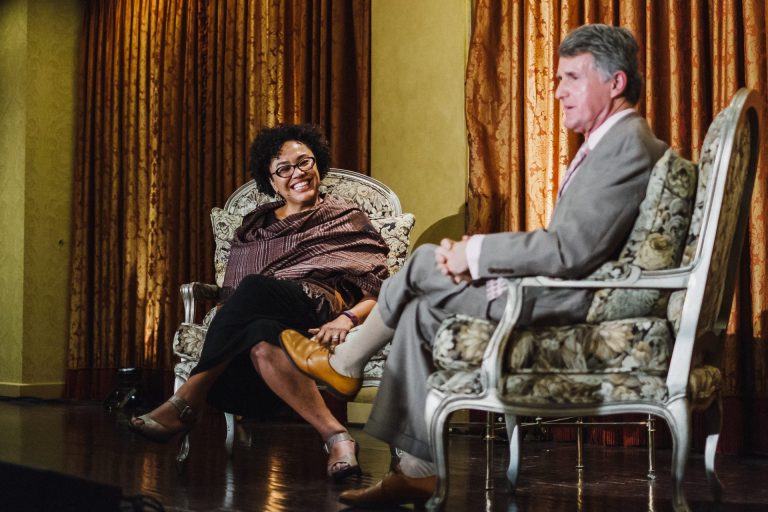 Dr. Maria Rosario Jackson speaks on stage with Kresge President Rip Rapson at the Grantmakers in the Arts conference in 2015. Jackson was nominated to be the next Chair of the National Endowment of the Arts on Oct. 5, 2021 by President Joe Biden.

President Biden has made countless admirable appointments to federal positions. But none more thrilling for us at Kresge than his announcement today of Dr. Maria Rosario Jackson’s nomination to be the next Chair of the National Endowment for the Arts.

Maria began working as a Senior Advisor/Consultant with Kresge in 2012, assisting our Arts & Culture team in their development of the creative placemaking strategy. She has remained an integral part of Kresge in the decade since, continuing to support Managing Director Regina Smith and her team and increasingly contributing to both our Strategic Research Learning and Evaluation practice and our American Cities program. We have been profoundly fortunate to have her become part of our family – both programmatically and through her significant contributions to our organizational culture and to our diversity, equity, inclusion, and racial justice journey.

Maria has served as a resource not only internally in helping develop, implement, refine, and evaluate our creative placemaking strategies, but also externally in offering her expertise and insights to grantees, in creating linkages to national networks, and in contributing to national policy conversations. She has penned multiple articles and thought-pieces about the creative placemaking efforts of Kresge and others, represented Kresge in conversations across the field, and facilitated discussions at convenings organized by ArtPlace, Arizona State University, the Federal Reserve Bank, and many other institutions.

We have benefitted over and over as Maria has shared her astoundingly deep background and expertise in measuring cultural vitality . . .  in examining the role of arts and culture in advancing comprehensive community revitalization in low-wealth communities … in exploring the many and varied ways of measuring the economic, social, and health effects of the arts …  in probing the nuances of how creative placemaking and social justice and community building intersect … in plumbing how arts and culture can contribute to identity while bridging across difference.

Maria received her Masters in Public Administration from the University of Southern California and her Ph.D. in Urban Planning from UCLA. After beginning her career as a research fellow at the Center for the Study of Urban Poverty at UCLA, she spent the next 18 years at the Urban Institute, where she led the Culture, Creativity, and Communities program.

The author of scores of articles and papers and a widely admired and sought-after speaker, Maria is an Institute Professor at Arizona State University’s Herberger Institute for Design and the Arts and ASU’s Watts College of Public Service and Community Solutions. Just to round out the picture, she also has been adjunct faculty at USC and at the Claremont Graduate University’s School of Management and a Fellow in Residence at the UCLA School of Public Affairs. Her resume of board service goes on for pages.

In 2014, President Obama appointed Maria to the National Council for the Arts, the governing body for the NEA. She has been instrumental in helping Kresge and ArtPlace forge close and strong working relationships with the NEA staff and in aligning the two bodies of grantmaking.

Maria leads with a profound inquisitiveness, tempered by deep humility, respect, and grace. She rarely asserts, preferring to suggest. She invariably chooses to listen – actively and deeply – before adding her own perspective. She contributes to conversation by building on and synthesizing ideas rather than by walking in certitudes of her own making. She honors her life experiences by lacing racial equity and inclusion into all that she does. She constructs complex frameworks of thought and action that possess the power of clarity and common sense, while not sacrificing nuance.

These qualities will make Maria an NEA Chair of uncommon promise.

Nobody understands better than Maria the role of arts and culture in building social capital, clarifying and fortifying community identity, and helping translate between the accomplishments and shortcomings of our history and the pitfalls and promise of our future.

Few, if any, appreciate more fully than Maria the ability of arts, culture, and design to inject creativity into public sector problem-solving, whether in the realm of health, transportation, community development, education, environmental protection, or human services.

Few comprehend as totally as Maria the full richness of the arts ecology, from the nation’s anchoring museums, theaters, orchestras, and dance companies to the grassroots energies of small arts organizations and individual artists.

It is impossible to imagine someone of more appropriate background, knowledge, skill, moral clarity, and temperament to lead the Endowment. Kresge will have a champion at the head of the NEA. More importantly, so will those who seek to advance equity and justice through the power of arts, culture, and design.