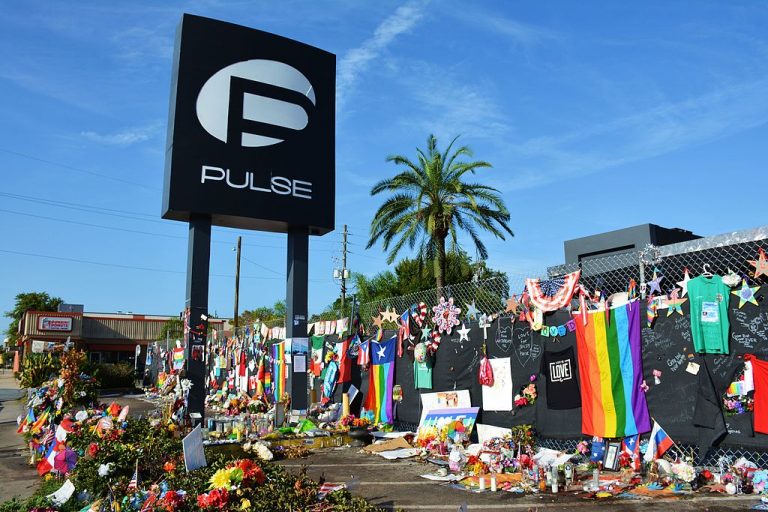 Memorials are left on the fence of the Pulse nightclub in Orlando, Florida, in 2016 after the deadliest attack on the LGBTQ+ community in our nation’s history. (Photo originally posted to Flickr by WalterPro4755; licensed under the Creative Commons Attribution 2.0 Generic license.

Five years ago this past Saturday, a single gunman entered Pulse nightclub in Orlando on “Latin Night” at 2:00 a.m. and started shooting. He left 49 dead and 53 others wounded.  President Biden put the tragedy into perspective when he wrote: “Five years ago, we suffered the deadliest attack affecting the LGBTQ+ community in our history. Within minutes, Pulse Nightclub turned from a place of acceptance and joy into a place of unspeakable pain and loss. As we remember the 49 souls we lost, we must recommit to honoring them with action.”

When I asked my dear friend Jerry Fladmark, who with his husband Travis is the godfather to my children, what action he would advise, he replied simply: “Keep dancing. Keep kissing. Keep being yourself.”

Jerry spoke about the unique role that clubs play in the LGBTQ+community. Ken Darling – one of Jerry and Travis’ closest friends, a good friend of mine while I was in Minneapolis, and the owner of the LUSH LGBTQ+ club in Minneapolis – wrote after the Pulse shootings: “A club is where we can be ourselves, develop relationships, be with your community. It’s where our history is.”  Clubs like Pulse and LUSH and countless others around the nation are places that people can move beyond their sense of isolation – in some cases beyond a secret they feel compelled to keep – to connect with others in full honesty and safety.

Ari Shapiro, a National Public Radio reporter, underscored this sentiment in an article he recently penned for The Atlantic:

This is what gay bars have done for people across cities and generations. They’re havens for strangers, places to make new friends, anchors of community, and oases of safety in a hostile world. Gay bars helped birth the fight for LGBTQ rights, and they provided meeting places for AIDS activists. They have been secular churches for people rejected by organized religion. And they’ve offered a cure for the loneliness and isolation that have characterized so much of queer life over the past century.

In the vigils and commemorations that followed the Pulse tragedy, people spoke of the shattering of that sense of comfort. Ken Darling noted, “We in the LGBT community have had to live with this threat of random violence forever. We’ve had a lull where we didn’t have to think about it, and then something like this happens and we’re reminded what’s out there – an ideology of hate that’s directed to us.”

As we near the end of Gay Pride month, that message is being taken seriously The President will sign a bill that officially designates the Pulse Nightclub site as a nationally recognized memorial.  And a final design for that memorial – together with a museum – continues on its path to becoming a reality:

The memorial will feature a reflecting pool wrapping around the building in forty-nine colors, together with 49 trees placed at the center of a garden.

Clearly, a memorial is not enough. Fuller legal protections are needed. More education. Deeper understanding and respect. But it is a fitting and powerful start.