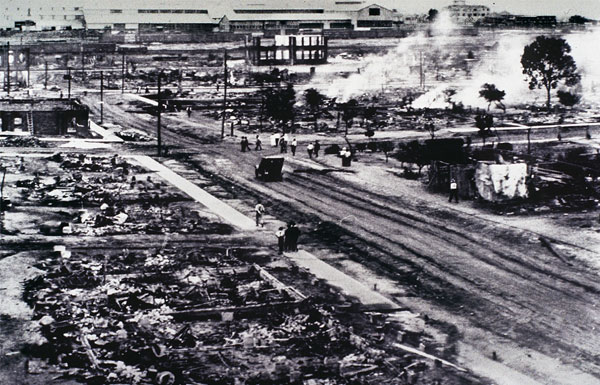 The aftermath of the Tulsa Race Massacre in 1921 where white mobs murdered hundreds of Black citizens and burned down a thriving Black neighborhood in Tulsa, Oklahoma.

As President Biden commemorated through his trip to Tulsa, Oklahoma this afternoon, today we observe the 100th anniversary of one of the most despicable and brutal mass killings in the nation’s history: the Tulsa Race Massacre. Over an 18-hour period on May 31st and June 1st, some 300 Black citizens of the Greenwood community were murdered by white citizens, triggered by a trumped-up allegation of a young Black man having traveled across the railroad track demarcation between Black and white Tulsa and causing distress to a white elevator operator on the southern side.

After a mob of more than 2,000 whites gathered at the jail, shots were fired, precipitating ferocious, wanton acts of murder, looting, and property destruction by white Tulsans. Private planes dropped incendiary devices. The all-white National Guard joined the mob.

Entire families were executed. Hundreds of homes and Black-owned and operated businesses were burned to the ground, while firefighters were prevented from putting out fires. Some 8,000 Greenwood residents were left homeless, many of whom were subsequently herded into internment/refugee-like camps.

The events destroyed in a day what has come to be known as “Black Wall Street,” what the Muskogee Comet, a Black newspaper, had termed the “Eden of the West for the colored people.”

It was a 35-block community of some 11,000 people, within the confines of which a Black resident could find Black-owned businesses and services touching every element of community life: churches, schools, a hospital, 38 grocery stores and fruit and vegetable stands, multiple doctors, lawyers, and dentists offices, a library, a dozen restaurants, two theaters, a hotel, plumbing and repair outlets, and a great deal more.

The massacre was wiped out of history for the better part of the last century. Until only very recently, there was no mention of May 31st and June 1st in the textbooks chronicling Oklahoma history. Newspaper accounts of the events were removed from microfiche archives. A cone of silence was imposed whenever the topic arose. The final resting places of those 300 deceased souls have not been identified.

That has slowly changed. Books, films, newspaper and magazine stories have reminded 21st century America of one of history’s darkest, most shameful days. Twenty years ago, the Tulsa Race Riot Commission undertook a fact-finding mission and issued a comprehensive and scathing report of the events, complete with a recommendation of: “direct payments to riot survivors and descendants,” a student scholarship fund, an economic development zone designation, and a memorial. Oklahoma passed an act shortly thereafter authorizing a memorial fund to be applied to those purposes. President Biden visited Tulsa today to intensify the search for the unmarked graves of those slaughtered in 1921.

The city will soon open “Greenwood Rising,” an exhibit center at the heart of the commercial area. And last week, a mural created by Michael Rosato was unveiled across the street from the cultural center.

This is all progress, of a sort. But, perhaps most acutely through the eyes of the three living survivors – Viola Fletcher, 107, her younger brother Hughes Van Ellis, 100, and Lessie Benningfield Randle, 106 – it is a distressingly far cry from adequate and full justice. That would instead require the acknowledgement by public authority of responsibility, including financial, for redress. . . a commitment to reparations for tangible, quantifiable economic deprivation over generations . . . an embrace of accountability for state-sanctioned arch-criminality.

Greenwood is one of the most egregious and evil, but nevertheless emblematic, examples of endlessly insidious patterns of denying communities of color the opportunity to build wealth and economic security – whether through redlining, Jim Crow laws, zoning and deed restrictions, exclusion from federal benefit programs, or hundreds upon hundreds of other structural obstacles to equal participation in the American economic system.

And when the Greenwood community heroically sought to rebuild, the State of Oklahoma – like state after state in post-WWII America – used the tools of the Interstate Highway Act to destroy the community’s vibrancy and social cohesion by building freeways right through it. Think the Rondo neighborhood in St. Paul . . . Overtown in Miami . . . Charlotte in Brooklyn . . . Treme in New Orleans. And Black Bottom/Paradise Valley in Detroit, brimming in the pre-war years with restaurants, businesses, jazz clubs, theaters, and recording studios such as Joe’s Record Shop, where John Lee Hooker and Aretha Franklin cut tracks.

The full marking of the Tulsa Massacre centennial can’t even begin to address the human atrocities of those 18 hours and the decimating effects – compounded over generations – of the home-, land-, and business-owners of Greenwood losing their accumulated wealth. But taking full and painful account of those events and paying tribute to the lives and dreams that died there is nevertheless a necessary step toward the excruciatingly hard, complex and long-term conversation this country has to have about the essential elements of racial reconciliation, including what it means to embrace reparations.

Kresge has sought to contribute to that process through our commitment to deconstructing structural barriers to communities of color participating equitably in the mainstream urban economy – and to substitute for those barriers genuine and effective on-ramps to economic and social opportunity. Through community control of land and property. Through home ownership. Through small business formation. Through educational opportunity. Through the presence of the full spectrum of artistic, cultural, commercial, environmental, human development and health services and amenities that a community like Greenwood showed the promise of creating.

The effects of our actions are, to be sure, limited. But they are actions in the right direction. And together with the actions of others of good will and serious intention, they can close the door on this contemptible period of American history and move us toward a future in which we all live equally into the possibilities of full economic opportunity.