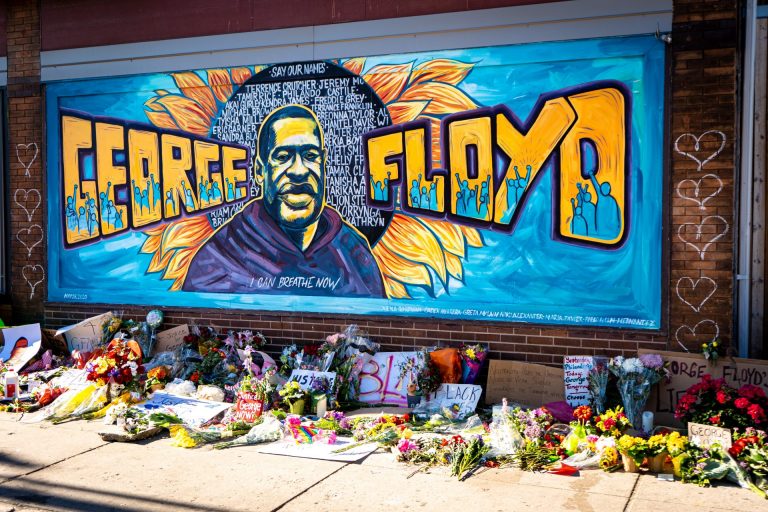 A colorful mural and tributes of flowers and signs honoring the life of George Floyd in Minneapolis. (Photo by munshots on Unsplash)

Philanthropy, in all forms, matters, and seven other lessons from the past year

It is one year today since former police officer Derek Chauvin killed George Floyd. Over the course of that year, the murder has precipitated a full spectrum of response and emotion. It ignited outpourings of anger, outrage and protest. It accelerated energies to build a racial justice movement equipped to bridge from protest to sustained change. It intensified efforts to deconstruct traditional policing practices in favor of more community-oriented problem-solving. It led to collective catharsis as the nation watched the Chauvin trial and embraced its verdict. It energized efforts to dismantle the underlying drivers of injustice and inequity, the racial wealth gap, the absence of economic opportunity. And so very much more.

At Kresge’s weekly staff meeting on Monday, we observed 8 minutes and 46 seconds of silence in Mr. Floyd’s memory. It was an opportunity to reflect on how his final breaths affected our own lives – its impact on our respective communities, its influence on an organization committed to racial justice, and its effects on us as individuals. I wanted to share just a word about how it has affected me.

First, it surfaces in me a tremendously painful and unremitting sadness, frustration and anger.

Mr. Floyd’s death drew back the veil from the countless, senseless, brutal, inhuman acts of violence inflicted with terrifying frequency by law enforcement on our citizens of color. This is anything but news to people of color, who have for centuries suffered and endured every conceivable form of white knees on Black and Brown necks. But for mainstream majority society, and for people like me, it was a long, long overdue newsflash – a jarring, reality-adjusting, myth-busting realization of the prevalence of abuse of public law enforcement authorities.

Second, it has burned into my consciousness that without fair and humane policing, it will be extremely difficult to build the sense of security and justice necessary for the nation’s cities to build toward broader structures of equity and opportunity.

George Floyd’s murder created an enduring compounding effect, elevating and casting into bright relief every prior and subsequent act of police violence against people of color. This is not a realm of public policy at which Kresge takes direct aim. But the Floyd murder is nevertheless a powerful reminder that all the systems shaping public life in America’s cities are interwoven and can’t, at the end of the day – or at the beginning of the day – be walled off from one another.

Third, it has strengthened my conviction that our organization’s racial justice grantmaking response was the right calibration between the short-term imperative of building the capacity of organizations working on the ground to advance equity and opportunity and our long-term commitment to dismantling systems that enable, reinforce and perpetuate injustice, inequality and differential opportunity.

Our passion must be engaged in the here-and-now, but tempered by the realization that the horizon-line of enduring change is distant. Impelled by the intolerability of existing conditions. Sobered by the complexities of meaningful restructuring of power, prerogative and privilege.

Fourth, it has suggested that we should not underestimate the difficulty of pivoting from collective mourning to focused and effective collective action.

The marches of protest were moving, powerful, demanding. But it will take a commitment to organizational infrastructure in myriad forms in scores and scores of communities to tie these expressions of grief and intention to coalitions, alliances, and networks capable of taking the fight forward. That is one of the many dimensions of import about how the Black Lives Matter Movement has evolved as it has – into genuine movement building that lies beyond the capacity of individual nonprofit organizations.

Fifth, it has given me a more acute appreciation for the power of narrative to become an accelerant to policy change.

Whether The New York Times’ 1619 Project . . . Ibram X. Kendi’s How to be an Antiracist and Stamped from the Beginning . . . Isabel Wilkerson’s The Warmth of Other Suns and Caste . . . Ijeoma Oluo’s So You Want to Talk About Race . . . Michelle Alexander’s The New Jim Crow: Mass Incarceration in the Age of Colorblindness . . . Robin DiAngelo’s White Fragility. . . or the growing number of films addressing racism’s roots and enduring legacies, such as If Beale Street Could Talk, Just Mercy, The Underground Railroad, Mudbound, and so many others . . . scholarship-driven popular culture has changed our racial vocabulary, our historical perspective, our basic abilities to navigate issues of race with greater honesty, understanding, and depth.

Sixth, it has amplified the crystalline truth that racial justice is inextricably interwoven with economic justice and that economic justice will, in turn, depend on our skill at localized policy implementation.

Our decisions over the last decade at Kresge to build adjacencies to the private and public sectors are an indispensable precondition for realizing our aspirations to improve pathways to opportunity in low-wealth communities. We will bridge the wealth gap only by influencing the machinery of capital flows under public and private sector dominion. Our experiences with the flow of Payroll Protection Program monies or Opportunity Zone Investments or small business supports all demonstrated unequivocally that it is both necessary and possible to create new ways of bringing capital to the ground for those who need it the most. We have widened our policy aperture to take full account of the nuances of implementation.

Seventh, it has buttressed my belief that this is a time and circumstance in which philanthropy – in all its forms – matters.

It matters in its ability to invest in frontline racial justice workers . . . To use its institutional voice to contribute to, and fortify, a growing chorus of those who seek fundamental change . . . To remind elected officials that racial justice is not a one-and-done, but instead a commitment to making countless continuing assaults on practices and policies that are too readily seen as intractable and beyond hope of reform . . . To provide spaces for wickedly difficult conversations among those who may not otherwise have the financial luxury to join in shared learning and common purpose.

And eighth, it has reinforced just how important Kresge’s internal diversity, equity and inclusion journey has been and will continue to be.

We must continue to excavate the layers of inequity that have accreted through this nation’s history, infiltrating every aspect of community life . . . to explore our individual and shared assumptions and norms about inclusion . . . to interrogate our talent, purchasing, and investing practices . . . and to recommit to the centrality of racial equity in all we do as an organization, both inside our walls, in the broader community, and throughout each and every program.

George Floyd’s death cannot become just a moment’s deviation from an unchanging reality. We proceed with the conviction that it has not become that, and will not – that it instead moves us with greater intentionality and speed along the arc of justice toward which Dr. King’s moral universe bends.