The city of Jackson, Mississippi was under a boil water alert for nearly seven weeks. (Photo by Ken Lund from Las Vegas, Nevada, CC BY-SA 2.0 https://creativecommons.org/licenses/by-sa/2.0, via Wikimedia Commons)

The flooding in Jackson, Mississippi is every bit as much a case of governance malpractice as was the water crisis in Flint, Michigan, although in the case of Jackson, the lines of responsibility even more clearly point in one direction than they did in Flint – the proximate cause of the disaster was, unequivocally, the unwillingness of state officials and policymakers over time to provide resources adequate to prevent and mitigate the challenge.

That is not to say that the state of Mississippi is the only state within the union that is guilty of malfeasance. The refusal of states to prioritize investments in essential water infrastructure is an insidious cancer that afflicts hundreds upon hundreds of cities and towns across the country. This is one of many reasons that the Biden Administration’s Infrastructure bill is so vitally important; it elevates the imperative that every dollar – whether competitive grant dollars, state pass-through dollars or direct-to-city allocation dollars – of the projected $75 million that will be sent to Mississippi for water infrastructure be spent wisely and strategically.

Without question, the failure of the pumps in Jackson was yet another augury of the power of climate change to upend – and transform – daily life in ways that are less obvious than hurricanes, wildfires, droughts and sea level rise. The rain in Jackson was heavy, but not at record levels. And it was something of a reprise of the flooding the city endured just last year – the city had already been under a boil-water notice for a month after the Department of Health collected cloudy water samples that indicated consumption of the city’s running water could cause health problems.

Those realities are poignant reminders that the pace of climate change is outstripping the pace of our mitigation and adaptation efforts – the sustained saturation in Jackson overwhelmed a water treatment plant that was not designed to, nor had it been upgraded to, meet the vicissitudes of climate change. The consequence: 150,000 souls and hundreds of schools, businesses, places of worship, cultural centers, hospitality venues, and other community institutions left not only without water safe to drink and to bathe in, but also without sufficient water pressure to carry out the necessities of daily life.

Distilled to its essence, however, Mississippi’s failure to anticipate and attend to the aging infrastructure in its largest city – its capitol city – was a foreseeable, preventable, and shameful consequence of long-standing institutional and structural racism. 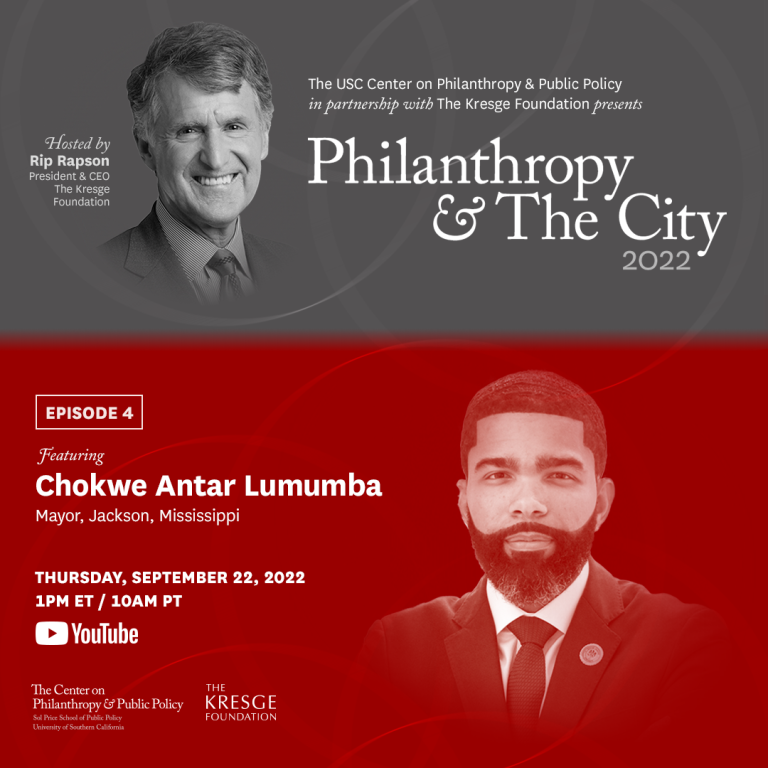 Jackson’s population is 80% Black, with one-quarter of its residents living with low-incomes. Disinvestment in the neighborhoods of the city has been a reality for more than fifty years, as white people and people of wealth fled the city in a downward spiral of tax-base erosion precipitated by the desegregation of the Jackson public school system. Kresge, Bloomberg and other philanthropies have invested in the city as a counterpoise to that trend. We have seen and heard first-hand the difficulties the city has had attracting capital . . . overcoming state pre-emption laws . . . pursuing strategies that would expand its tax base.

You will hear a description of those challenges in my Philanthropy and the City 2022 series interview with Jackson Mayor Chokwe Lumumba that will premiere on Kresge’s YouTube channel at 1 p.m. ET on September 22 (taped in April, before the water system failure).

In its excellent piece, “How Jackson, Mississippi, ran out of water,” Vox reinforces this analysis:

[T]he roots of this crisis run much deeper, and are inextricably tied to white disinvestment from a majority-Black city. Jackson’s water system — which serves a population that is more than 80% Black — has been burdened with problems for many years, largely because white flight drained the city of resources. The state’s Republican legislature has also failed to provide the majority-Democrat city with adequate funding for repairs.

Ongoing tensions between the city and state have only made infrastructure upgrades more challenging. While spreading out the cost of repairs to the state would help cover the expenses, many white people in the suburbs aren’t compelled to help and many Jackson residents fear ceding control of such a vital service . . . .

The Governor’s declaration of a state of emergency will help in the immediate-term. So too will getting the pumping stations back on-line. But, ultimately, state politics must yield to local equity and justice. Mississippi has the opportunity to flip the script. We can only hope that it will.