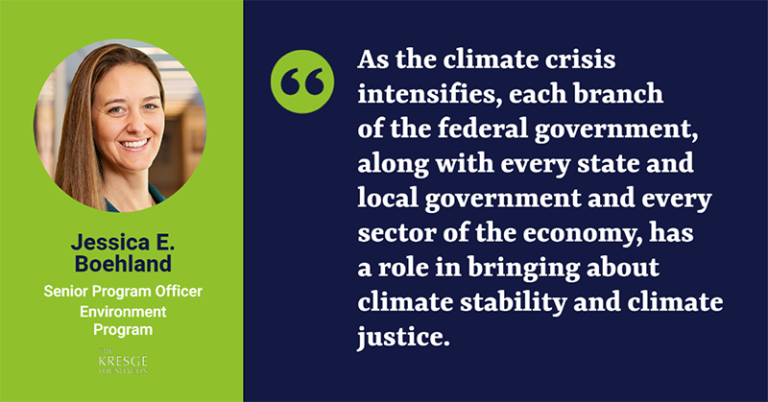 For anyone who worries about climate change – and, since climate stability is an imperative for social progress and human flourishing, that should be all of us – it’s been a rough summer.

We have entered the age of climate crisis. The planet is blinking red, sending regular announcements that the climate is out of balance and veering further off kilter by the year. Just a few recent examples:

Meanwhile, the federal government’s Judicial and Legislative branches appeared AWOL, slowing the Biden-Harris administration’s response to the timed test of climate action and hobbling global cooperation to address the crisis.

However, hopes of federal climate action were kindled by surprise news on July 27 that Senator Manchin and Senate Majority Leader Chuck Schumer had agreed on a budget reconciliation proposal—the Inflation Reduction Act of 2022—that would direct $369 billion toward climate and energy programs over the coming decade, reducing U.S. carbon emissions 40% from 2005 levels by 2030. That’s less than the 50% reduction the U.S. committed to in the Paris Agreement, but far more than we are currently on track to achieve. Among other welcome elements, the draft legislation includes $27 billion to establish a federal Green Bank and $60 billion for environmental justice priorities.

Where now should we focus our energy—and, for those of us in philanthropy, our money?

The scope and urgency of the climate crisis demand a comprehensive response. We need the entirety of the federal government to acknowledge and address the problem. The Judicial and Legislative branches must treat climate change as the crisis it is. The Executive branch should do the same.

Beyond federal policy, we can and should engage in these spheres:

Action at the federal, local, state, and corporate levels is indispensable but inadequate. To make any of this work, we need an informed public demanding meaningful and equitable climate action, and we need leaders at all levels who are accountable to the public. And so, we also must pull with all our might on two final, foundational levers:

As the climate crisis intensifies, each branch of the federal government, along with every state and local government and every sector of the economy, has a role in bringing about climate stability and climate justice. Every lever matters, because every fraction of a degree matters. We must fight with all our tools, intelligence, and might to prevent climate change from becoming unmanageable.