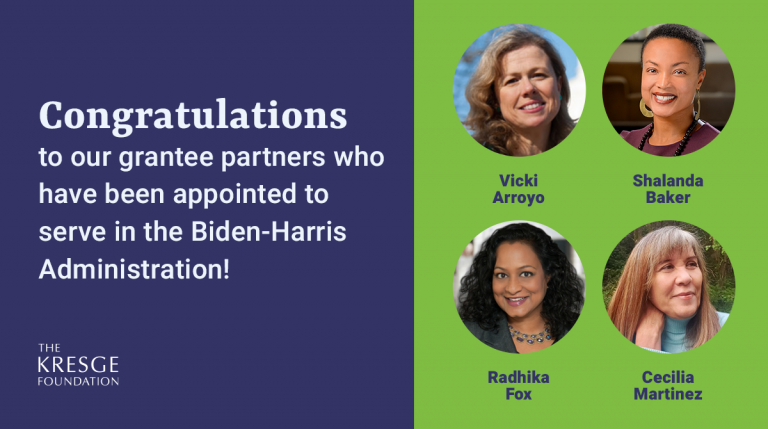 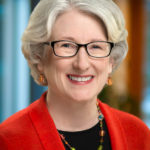 The Kresge Environment team is delighted to congratulate four of our long-time grantee partners who have been appointed to senior posts in the Biden-Harris Administration.

While not an explicit focus of Kresge’s environmental grantmaking, federal policy is critical to cities’ ability to combat and adapt to climate change. The skills, values and character of White House and federal agency staff matters. That’s why we were so pleased to see four superstars well known to our team assume roles important to progress on climate change and environmental justice.

Vicki Arroyo, founding executive director of the Georgetown Climate Center, now serves as Associate Administrator for the Office of Policy at the Environmental Protection Agency.

Shalanda Baker, on leave from her position as professor of law, public policy and urban affairs at Northeastern University and co-founder and co-director of the Initiative for Energy Justice, now serves as Deputy Director of Energy Justice at the Department of Energy.

Radhika Fox, former US Water Alliance CEO, now serves as the Principal Deputy Assistant Administrator for the Office of Water at the Environmental Protection Agency.

Cecilia Martinez, co-founder and former executive director of the Center for Earth, Energy and Democracy in Minneapolis, now serves as Senior Director of Environmental Justice at the White House Council on Environmental Quality.

We saw proof of the Biden-Harris Administration’s commitment to racial equity and environmental justice with the series of executive actions signed on day one after the inauguration, and in the weeks following. There will now be a climate change team located within the White House. President Biden remained true to his promise, recommitting to the Paris climate agreement, canceling the Keystone XL pipeline and ordering federal agencies to begin the process of reviewing more than 100 environmental regulations revoked or adopted during the prior administration.

The new administration has made a firm commitment to tackle climate change and transition to a clean energy economy with federal investments to drive these changes in communities hardest hit by our country’s climate. The appointments of Arroyo, Baker, Fox and Martinez, along with a host of other eminently qualified individuals, is testament to the seriousness of that commitment and the intent to address climate change and environmental justice concurrently.

We’re grateful to these four women for the service they are already providing to our country.