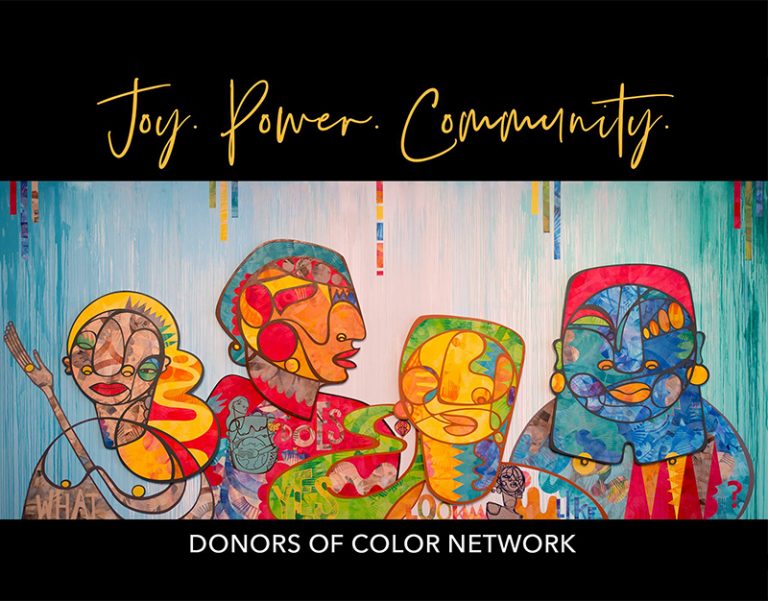 The Kresge Foundation joined the campaign created to challenge the nation’s top funders to be more transparent with where their U.S. climate dollars go, and to commit at least 30 percent of U.S. funding to Black, Indigenous and people of color-led groups.

New York, NY – Donors of Color Network – the first ever cross-racial community of donors and movement leaders committed to building the collective power of people of color to achieve racial equity – today announced the launch of their groundbreaking campaign to move hundreds of millions of dollars to climate justice groups led by Black, Indigenous, and people of color (BIPOC) and create millions of new jobs. The Climate Funders Justice Pledge – developed in coordination with movement leaders from across the country – calls for at least 30 percent of funders’ U.S. climate dollars to go to BIPOC-led justice-focused groups, and for greater transparency in reporting from donors. One of the top 20 private foundations in terms of assets in the U.S., The Kresge Foundation, as well as six additional top 40 funders, have already taken the pledge. Movement leaders and allies will be joining forces to encourage top funders to join Kresge and other funders in taking the pledge. The campaign kicked off with a video narrated by activist, Rosario Dawson.

During a tumultuous year of racial reckoning, many of the country’s top philanthropies issued statements of support and solidarity with those marching for justice. But for many, their funding decisions have yet to reflect their stated values. A recent study found that of the roughly $1 billion in annual environmental and climate grantmaking made by twelve top funders, only 1.3 percent goes to BIPOC-led environmental justice organizations.

“Frontline communities of color are punching above their weight with their wins in the fight to save our planet, despite being hit first and hardest by climate disasters,” said Ashindi Maxton, Executive Director of the Donors of Color Network (DOCN). “But, the largest funders have systematically underfunded organizations led by communities of color. It is morally wrong and it is ineffective as strategy. The Climate Funders Justice Pledge will help shift the center of gravity in philanthropy to a climate movement that operates at full power.”

The centerpiece of the pledge is the commitment to increase the share of U.S. climate funding going to justice-focused BIPOC-led groups – those with over half of their boards and senior staff comprised of people of color, and for whom building power within BIPOC communities is an explicit commitment – to at least 30 percent over the next 12 to 24 months. As a starting point, funders who take the pledge will, within two months, upload their 2019 and 2020 grants to Candid’s eReporter program and, within three months, disclose to DOCN the percentage of their U.S. climate giving that is currently directed to such groups. The goal is to strengthen the environmental movement by investing in climate justice as a focal point for solving today’s most pressing economic and climate issues.

“The approach the donor community has been taking to tackle our climate crisis is not sufficient. The scale of natural disasters our country has experienced this year alone continues to disproportionately devastate communities of color, and we can’t continue business as usual,” said Rip Rapson, President and CEO of The Kresge Foundation. “We recognize the historic underinvestment in front-line organizations working toward environmental justice. The problem-solving responsibility must include people representative of these communities and must also be set and governed by them. Kresge is proud to be one of the first philanthropies to commit to the Climate Funders Justice Pledge, and we encourage our colleagues to join us.”

Kresge’s commitment comes after a $30 million grant announcement to support nearly 60 racial justice and community-led efforts across the U.S. Support for climate mitigation efforts is highest among people of color, who have secured major successes with fewer resources compared to their white counterparts. BIPOC-led groups have shut down oil pipelines from Standing Rock to the Atlantic Coast, stopped new gas plants, secured billions of dollars for vulnerable communities in state climate bills, and boosted clean energy and green jobs at the ballot box.

“BIPOC activists are mobilizing to make ‘good trouble’ for those who pollute and exploit our communities,” said Jacqueline Patterson, Senior Director of the NAACP’s Environmental and Climate Justice Program and a supporter of the Climate Funders Justice Pledge. “People of color have accomplished so much with scant resources; there is no limit to what we can do once we get a fair share of climate funding. That is the vision behind this campaign.”

“We’re glad to finally have leadership in Washington that acknowledges that climate change is real, but our movement has never waited on the sidelines for Congress to act,” said Colette Pichon Battle, Executive Director of the Gulf Coast Center for Law and Policy and a DOCN advisor. “We will be where we have always been: in the vanguard of protecting the planet for future generations. The political obstacles only make it more critical that we receive support in doing this work, and that is why we are joining so many fellow movement leaders in supporting the Climate Funders Justice Pledge.”

“The climate justice movement has made tremendous impact no matter who has held power in Washington,” added Miya Yoshitani, Executive Director of the Asian Pacific Environmental Network and another DOCN advisor. “Our movement is tested, and knows what wins. Funders must grasp the essential and strategic power of BIPOC communities and this campaign will further open their eyes. The far right and fossil fuel companies certainly understand our potential, and seek to use our communities to drive a wedge into the environmental movement. We will not allow it.”

Over the course of the next two to three months, as pledges are made and fulfilled, DOCN will share data publicly on their campaign website on how much money funders currently give to BIPOC-led powerbuilding groups doing climate work, as well as the projected amount that will be moved to these groups when funders pledge to give at least 30 percent of their U.S. climate dollars to them in the next 12 to 24 months.

The Donors of Color Network will continue sustained outreach to top philanthropies to invite their participation for this critical campaign. Additionally, DOCN will roll out profiles of several BIPOC-led movement networks that have achieved major successes in recent years, to highlight the kind of work that will grow as more funders take the Pledge.

Read more about this effort in a series of articles published by the Associated Press, Inside Philanthropy, the Chronicle of Philanthropy, the Washington Post and other media outlets where Environment Program Managing Director Lois DeBacker shares her thoughts.

“Equity is obviously a central concern for us because of how structural racism is a barrier of opportunity,” said DeBacker in the Associated Press article. “If we’re going to win on climate change in this country, the climate movement needs to look like all of the country. It does, but it hasn’t been equally funded.”