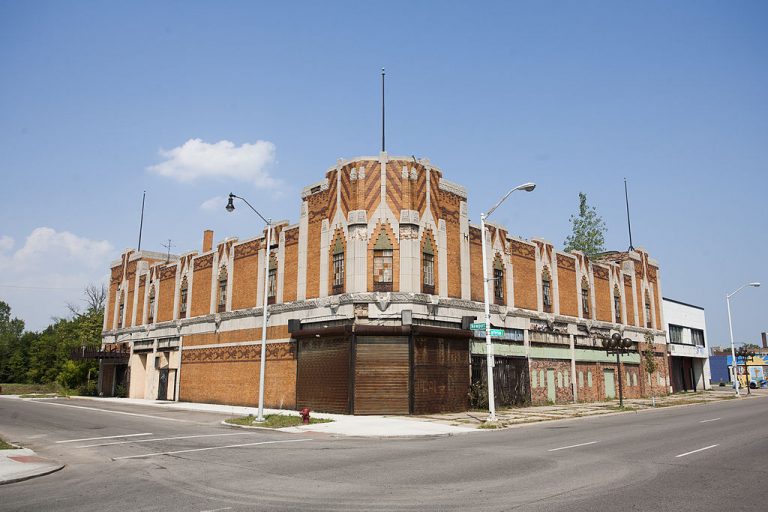 The Vanity Ballroom in Detroit as seen from Jefferson Avenue in the fall of 2010. Photo by Albert Duce, CC BY 3.0, via Wikimedia Commons.

Kresge’s Social Investment Practice team recently bought a 30% interest in EJDC for $2 million, the first time the foundation has invested in a for-profit real estate development company. The investment has put enough cash on their balance sheet to enable them to gain control of almost 90% of the properties along Jefferson Avenue. Coupled with tax-increment financing, this equity infusion has in turn permitted EJDC to undertake a comprehensive package of five projects with a price-tag of $125 million – including a new community center at Alfred Brush Ford Park underwritten by a $5 million grant from the Penske Corporation.

Although one of the projects is a new, ground-up 38-unit residential and ground-floor retail building, what strikes me as particularly powerful in this portfolio is EJDC’s deep commitment to historic preservation. Two projects in particular stand out.

The first is a $2.2 million renovation of a former Kresge Five and Dime store at 14300 East Jefferson.

Before COVID-19 set in, an Asian-Mexican fusion restaurant was scheduled to occupy the space, with a community room in the rear. The pandemic forced them to back out, so plans now call for a “ghost kitchen” for pop-up restaurants and commercial use until the restaurant sector bounces back and a more permanent tenant can be identified.

The second project is the $14 million renovation of the two-story Vanity Ballroom, right across the street from Kresge’s former store. As has been so common with many of Detroit’s century-old, once-ornate spaces, the 1929 ballroom has been badly neglected – its once Aztec-inspired interior unrecognizable, the floating maple floor on which Cab Calloway and Duke Ellington performed long lost, and its roof exposed (where, as was true of Symphony Hall, trees are growing).

Like the Michigan Central Station and the Packard Plant, however, the reinforced steel skeleton of the building has held. The plan is to build out 15,000 square feet of ground-floor commercial space and to renovate and reactivate the second-floor ballroom.

All of this community development news underscores how central a role preservation can play in renewing our sense of community and place after we emerge from the cellar of COVID-19. Detroit’s record of preserving its architectural heritage has not been perfect, but its successes have been a significant factor in maintaining its status as one of the nation’s greatest repositories of architectural excellence.

Now think about Detroit’s physical presence without these efforts. One can’t.

The city has been created over time, layer upon layer, in a way that distills and reflects the experiences, symbols and civic values of succeeding generations of our community. Some good, some bad, but all significant. As we rush to create anew, however, we too often fail to realize that we are ripping through these layers without an understanding of the violence we do in the process to the remnants of our past.

I would argue that Detroit has done a far better job than most cities in identifying which of these resources we value, how they can be integrated into the broader context of urban development, and how we can take advantage of the opportunities they present for re-imagination and re-use. Unlike so many other places, Detroit has evolved a preservation ethic.

East Jefferson Development Corp’s efforts come right out of that ethic. We should all be grateful.