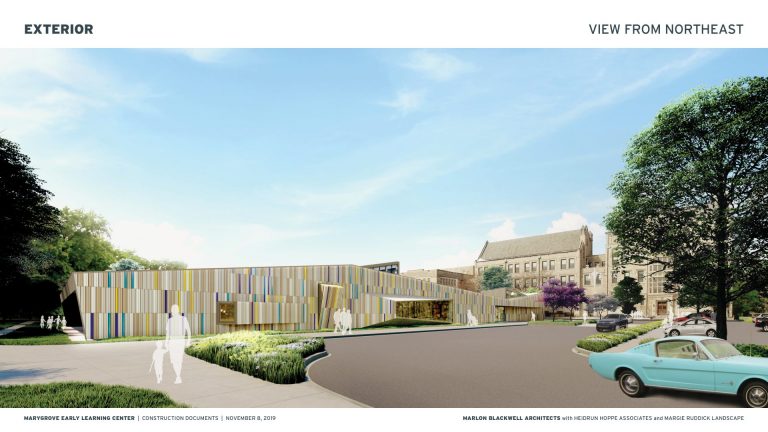 DETROIT – In a first for Detroit’s children, a group of five mission-led financial institutions has closed a package totaling $22 million, including $8 million in New Markets Tax Credits (NMTC), to provide financing for the cutting edge early childhood center being constructed on the Marygrove campus. This is the first NMTC project in Detroit primarily focused on early childhood development and education.

The recently closed financial transaction supports construction of the facility that broke ground in November 2019 and is slated for completion in Spring 2021. The transaction included contributions from The Kresge Foundation, Northern Trust, Capital Impact Partners, MBS Urban Initiatives CDE, LLC (an affiliate of McCormack Baron Salazar), and Cinnaire.

“This financing package represents a continued commitment to the children and families in Detroit neighborhoods, that they should have access to the best early childhood educational opportunities,” said Aaron Seybert, managing director of The Kresge Foundation’s Social Investment Practice, which led the work in assembling this financing package. “We can’t wait for the day that young, bright residents of Detroit get to walk into the center for the first time and experience all it will offer.”

The NMTC Program, run by the federal CDFI Fund, incentivizes community development and economic growth through tax credits that attract private investment to distressed communities. Tax credit authority moves through Community Development Entities (CDEs), financial intermediaries through which private capital flows from an investor to a qualified business located in a low-income community.

“We are pleased to be part of this meaningful project,” said Connie Lindsey, Northern Trust’s Head of Corporate Social Responsibility and Global Diversity, Equity and Inclusion. “We are committed to bringing capital to under-invested communities, including support of quality education that will change lives.”

“Study after study has shown that early childhood development and education can provide a lifetime of benefits. It is one of the best returns you can make on a community investment with economists having calculated up to a 10% rate of return in increased lifetime achievements and reduced negative mental and physical impacts later in life,” said Laurel Tinsley, CEO, MBS Urban Initiatives CDE, LLC. “MBS Urban Initiatives CDE is proud to support the neighborhoods’ young children and their families. We know that neighborhoods are more than just housing; they are vibrant schools, community services and access to quality jobs – all of which will be created with just this one investment.”

“At Capital Impact, we invest in innovative models that help bring about systemic change in our educational systems and ensure all students have equitable access to high-quality education,” said Will Robison, Manager, National Education, Capital Impact Partners. “We understand how critical early childhood education is to the developmental period of children and are thrilled to support the Marygrove deal, our 10th educational deal in Detroit and third deal in the Bagley neighborhood.”

“Preparing our children for the future is a shared responsibility and we’re proud to join our partners committed to investing in high-quality early childhood education for Detroit families,” said Lucius Vassar, Senior Vice President and Detroit Market Leader for Cinnaire. “We are dedicated to investing in and funding collaborative developments like the Marygrove P-20 campus to ensure that every child can receive the best start in life through early childhood education. We look forward to seeing the long term social and economic impact the center will bring to Detroit’s Northwest neighborhoods.”

Starfish Family Services will operate the center when it opens in fall 2021 and plans to serve 144 students with a funding model that includes federal (Head Start) funds, state funding, and private dollars. It will be the first mixed-income center in the city and one of the largest in both number of children served and floorplan, with more than 28,000 square feet. Students living in the immediate neighborhoods surrounding the Marygrove campus in Northwest Detroit will be offered priority enrollment. The center will also serve as a resource and convening hub for other early childhood providers in the city.

“Starfish is proud and thrilled to be one of the driving forces behind this amazing, custom-designed Early Childhood Education (ECE) Center,” Starfish CEO Ann Kalass said. “What’s energizing to me and all of the partners is that this is more than a building–it’s a commitment to helping build the brightest futures for Detroit children and families.”

According to a report from the New Markets Tax Credit Coalition, NMTC made 114 projects possible in Michigan from 2003 to 2019. In that time, Wayne County saw more than $50 million in investments that included these credits. Other Detroit development projects that used NMTC include M-1 RAIL, the 8 Mile Meijer shopping center, Henry Ford Academy, and the Argonaut Building.

“Nearly a third of that gap exists in the communities surrounding the Marygrove campus. That’s why this location is so strategic,” says IFF CEO Joe Neri. “Combine that with our best practice design for early learners and the collaborative spirit of this development, and the result is a space that’s not only beautiful and functional, but also a real community space.”

The campus at Marygrove includes more than the early childhood center. The vision for the campus, led by the Marygrove Conservancy, is to create a state-of-the-art prenatal-to-postsecondary educational home for Detroiters, especially those in the Livernois-McNichols area.

The School at Marygrove, in partnership with Detroit Public Schools Community District and the University of Michigan School of Education opened in 2019 with its first ninth-grade class of students. In September, the school expanded to two classes, now serving both freshmen and sophomores.

“The Marygrove Conservancy is thrilled to be the first early childhood beneficiary for New Market Tax Credits in Detroit,” said, Racheal Allen, Chief Operating Officer for the Conservancy. ”This investment allows us to further our mission of creating cradle to career opportunities in northwest Detroit.