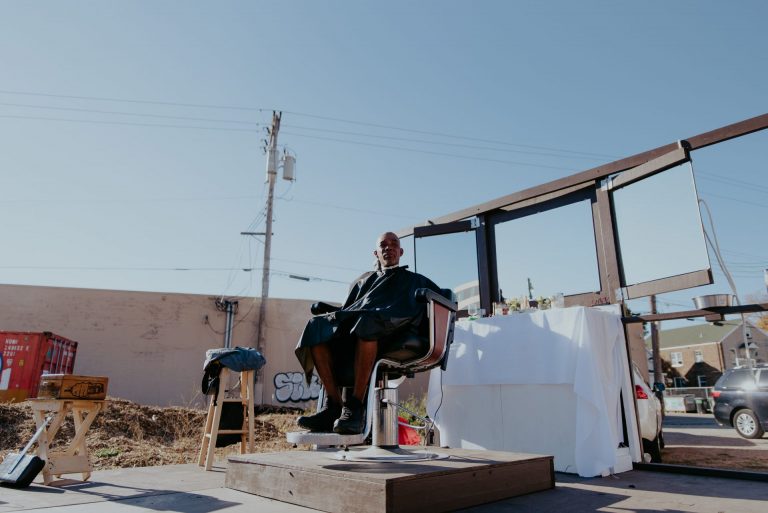 A man sits and waits for his barber as part of the “Haircuts for Change” project, which focuses on healing and beauty practices in the South Minneapolis Black community by providing haircuts and self-care in pop up locations along Lake St. and Chicago Ave. Photo by Pierre Ware.

By Teeko Yang, Project Manager of the City of Minneapolis’ Creative CityMaking Program

This fall, the Office of Arts, Culture, and the Creative Economy of the City of Minneapolis, Minnesota launched a partnership with Arts Midwest to disburse grant funds for 10 projects that will support urgently needed artist-led creative healing. The initiative was created in the wake of the death of George Floyd who was murdered in the custody of Minneapolis police and the subsequent community uprisings. One of these projects is Haircuts for Change, which is providing haircuts and self-care opportunities for the South Minneapolis Black community. The project, created by artist Samuel Babatunde Ero-Phillips in collaboration with Christie Marie Owens and Barebones Puppet Theatre, transformed over time from a pop-up concept to a permanent altar and installation on Lake Street, the heart of Minneapolis’ immigrant corridor.

Teeko Yang, Project Manager of the City of Minneapolis’ Creative CityMaking program, interviewed Sam about why his piece evolved, how micro interactions can build community, and his hopes for the future. This interview has been edited for length and clarity.

My name is Samuel Babatunde Ero-Phillips, and I am an artist, designer and educator. I grew up mostly in North Minneapolis, but also in Nigeria. I went to school for architecture and studio arts at the U of M for my undergrad, and I have a Masters in Architecture. I’ve worked in the public art world in the Twin Cities since 2007.

I was one of the original artists to help start the Creative CityMaking pilot program in 2013-14. I worked with Roger Cummings and Caroline Kent to do a project with Haila Maze at the City of Minneapolis in the Community Planning & Economic Development Department. We did two small area plans where we compiled data, in the Linden Hills and Dinkytown neighborhoods. For both neighborhoods, we came up with artist interventions to help reach out to under-represented people to make sure they were a part of the process. We created a mobile bike theater to get people to come and ask questions about urban planning and design in their own community, and then we gave them a T-shirt.

How did you come up with the idea for this Creative Response Fund project?

Originally, I wanted to create some type of altar memorial to George Floyd, and also for Black folks who’ve been taken from us by the police. I reached out to my friend Christie Marie Owens to ask if she could help with coming up with an idea for an altar, because she had been going to the George Floyd memorial site a lot.

Christie then told me that she and her boyfriend Mac had actually done pop-up barbershops in the past and offered back-to-school haircuts for kids who didn’t have the resources to get haircuts. She thought that it’d be cool to find a way to incorporate that in the project, since barbershops and salons were closed due to COVID-19. We talked about what healing and self-care look like in the Black community. That act of grooming yourself and being with each other is a way of processing. We talked about the healing aspect of barbershops in general, and mental health and likened it to going to a counselor.

Christie’s boyfriend Mac is my barber – he cuts my hair. So there was already synergy there. Mac works at Urban Touch on 14th and 38th. The George Floyd memorial site is on Chicago and 38th. I thought about all of that and I was like, “Wow, the act of being together, the act of getting a haircut, I think this could be a pretty moving project.”

After that, I got excited about building a display for that interaction to happen. I knew once we set the container, the rest would be filled in. Mack would do a good job of holding the space and just being there and letting people talk and just being able to be together.

How did the project come together, and what made you decide to make the piece a permanent installation?

When I started the project, I thought it might be a pop up. I had identified the Chicago Lake Street site as one place I wanted to activate. For a while, actually, I’ve wanted to activate that place because it’s where the Roberts Shoes building was . But also, if you go straight down Chicago, that’s the George Floyd memorial site, and then trauma happened on Lake Street itself. I felt being on the main strip where all the action happened was important.

Then, I met with the team from Confluence. The Roberts Shoes site was private property and they were excited about us having an installation there. I decided to build one display and leave it. It’s a stage with a backdrop, and a barber’s chair, which really completed it. We used pressure-treated wood, and we painted everything. Theoretically, it’ll last for a couple of years.

The thing I love about the project is I don’t have to go out of my way to explain to people what it is. Most folks come by, see it, and they’re like, “Oh, that’s dope. You guys made a barber shop altar for the community.” And it’s like, “Yeah, exactly, it is. It’s exactly what you think it is.” It’s easy to understand, it doesn’t have to get too academic but it is still moving.

We were actively offering haircuts for five days, but we also did an opening and closing drumming ceremony. And then we had a day of mural painting, and people out there were burning sage and laying candles even when we weren’t actively open. We did eight days as an ode to Obatala, a Yoruba Orisha. And that was dope, too. I’m actually Yoruba. My dad is from Nigeria. He grew up in Lagos. Half my family is Nigerian so that felt really good to bring in the element of Orishas into this. Just to have that level of healing as a part of the project was moving. I greatly appreciated that Christie brought that to the space.

What does the idea of creative healing mean to you?

Creative healing is finding a way to do something artistic and peaceful in a place that’s visible, that invites people in to be a part of a process. Creative healing is giving an opportunity for people to get a haircut and have that self-care. All of these things are small interactions, but collectively, they equal something that makes people think about the city a little bit differently. I like it when I can get people to think about an area that they go all the time, and just imagine it in a new way.

It invites you in, too. I think that’s another fun part of this project. You can get a haircut and have a conversation. People are thirsty for interactions under COVID-19. I’m happy we did our project when we did it because it’s already cold now. We utilized the good weather while it was here, and we got people to interact while we could. It definitely worked out better than I anticipated.

What has the response from the community been like?

I think of the person who was experiencing homelessness who came by, saw us out there, was kind of shy and was like, “Oh, I don’t have any money, but could I get a haircut?” I’m like, “Of course you can get a haircut. That’s why we’re here.” And I saw him then walking by several other times, and yo, he looked fresh. I had been seeing this dude while we were building on the block looking kinda haggard, but he was so happy to have a fresh cut. People were giving him compliments, and you could just see that smile on his face where he was just happy. You know what I’m saying?

There was another guy, his name was Brother Ralph. While I was building and we were putting the chair on, he was like, “Oh, this is dope. This is dope.” He reminded me of the type of men I see at the barber shop who are just having a conversation, talking about who’s a better hooper or how so-and-so should have done something differently in the community. He got it right away. He was moved and he came by twice. He came by when it was under construction and took a picture of me in the chair, and then I sent him a photo of the first day like, “Yo, we opened. It’s kinda lovely. You should roll through.” And he just came through just to see it and just to be in the presence of a barber shop.

I think of the folks who were living in the [homeless] encampment in Powderhorn Park. One of them came by and was trying to panhandle and I offered him some money to help build. And then he was like, “Oh, I remember you. You and your kid came by and gave me a tarp when I was living in the park.” And I was, “Oh, that’s dope.” It was about trying to involve people and trying to create some healing in the Black community through every micro interaction. To me, that’s the work. That’s why I like doing placemaking. I know there’s a lot of issues with placemaking being done in black and brown communities by outsiders. I feel fortunate that I’m able to, as a black man, able to relate in a different way that is inviting. I was really trying to include and invite as many people as possible, and from that standpoint, I think this project was even more successful than I had originally anticipated.

What are your hopes for the city of Minneapolis moving forward?

First and foremost, I hope we get police reform because the murder of George Floyd is what sparked off all this unrest and property destruction. George Floyd is just one individual, but this problem has been around longer than what happened to Mr. Floyd. But it can’t just be performative. I’m happy this was a cool project, but if there isn’t meaningful police reform, you could take this project back. I hope the city learns from this, and I hope that the world learns from this, and we really do shift that conversation of what police reform looks like.

I also hope that we build and rebuild in such a way that isn’t gentrifying this neighborhood. If you look on a map and you look at the 2010 Census track, and you see the statistical dots of who lives where, the border between Phillips and Powderhorn, along that spine of Lake Street, is one of the most diverse places in the Twin Cities. It’s distinctly a cultural district, as well as an economic district. It’s an immigrant corridor. I hope the city is able to rebuild in a way that supports that kind of community coming back.

But above all, I hope we get the kind of police reform that doesn’t lead to another George Floyd here, or anywhere.

Creative CityMaking is a program of The Office of Arts, Culture, and the Creative Economy at the City of Minneapolis. Funding is provided by The Kresge Foundation. Arts Midwest is acting as fiscal agent for the disbursal of grant funds.

Kresge staff is working remotely, and our offices are closed until further notice.  See our promise to partners during COVID-19.
+
Survey

We want to hear from you!