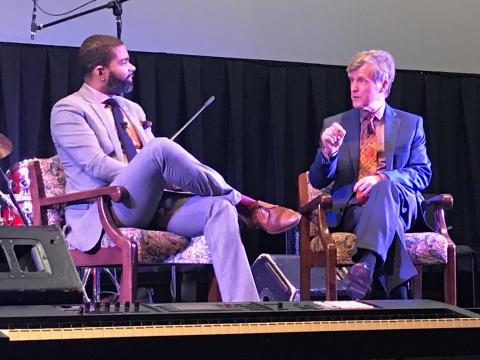 Putting arts and culture at the center of urban community development strategies was the topic of a discussion between Kresge President and CEO Rip Rapson and Jackson, Mississippi, Mayor Chokwe Antar Lumumba this week at the 7th annual ArtPlace Summit in Jackson.

The discussion between Rapson and Lumumba was among dozens of sessions at the Summit exploring topics as diverse as anti-displacement and anti-gentrification strategies, community trauma and resilience, influencing local policy, integrating food systems into community and the power of storytelling. ArtPlace America is a 10-year collaboration among foundations (including The Kresge Foundation), federal agencies and financial institutions aiming to position arts and culture as a core practice in American community planning and development.

Lumumba explained how Jackson, with almost a quarter of its population below the federal poverty line, is harnessing the power of the arts and its rich cultural heritage to build a people-centered economy in a community challenged by decades of disinvestment. That includes art- and culture-based businesses built on local assets and owned cooperatively by residents, rebuilding physical infrastructure like roads and establishing an inspiring collective vision to unite residents.

Rapson, who chairs the ArtPlace Funders’ Council, praised the mayor’s vision. It is, he said, “a profound philosophical orientation that puts people at the center, that puts community organizations at the center and a shift of power at the center.”

Lumumba said he could not envision a community development strategy for Jackson without arts and cultural heritage as key drivers.

“When I see a city that has been disinvested in … I see art playing a very integral role in creating an inspirational message of the direction we want to go in,” said Lumumba. “There’s no way I can see us going forward without art as a centerpiece of what we’re doing.”

The intersection between the arts and community development sectors in Jackson has grown dramatically in recent years, including the maturation of the Jackson Medical Mall, a health and retail hub designed for and with the community; and the resurgence of the Midtown Arts District that dates back to the 1970s.

But big projects aren’t the only ways to engage and energize the community. Lumumba related how an aggressive road-paving agenda had created a buzz around town. But when the local arts council redesigned and repainted the “Welcome to Jackson” sign, the roads became an afterthought.

“We were a forgotten notion,” Lumumba joked. “It created a sense of place. It gave people an opportunity to have pride. That spoke volumes to me. People want to have pride in their city.”

The three-day conference included presentations and panel discussions, including numerous partners and grantees working with the Kresge Arts & Culture Program, which focuses on leveraging arts, culture and community-engaged design toward more equitable community development. Those included a local partner, Nia Umoja from the nearby Cooperative Community of New West Jackson. The cooperative is a grantee through Kresge’s Fresh, Local and Equitable (FreshLo) initiative, which focuses on integrate food, art and culture into equitable development strategies of communities of low incomes.