Strong relationships pave the way for vaccination success in Lubbock 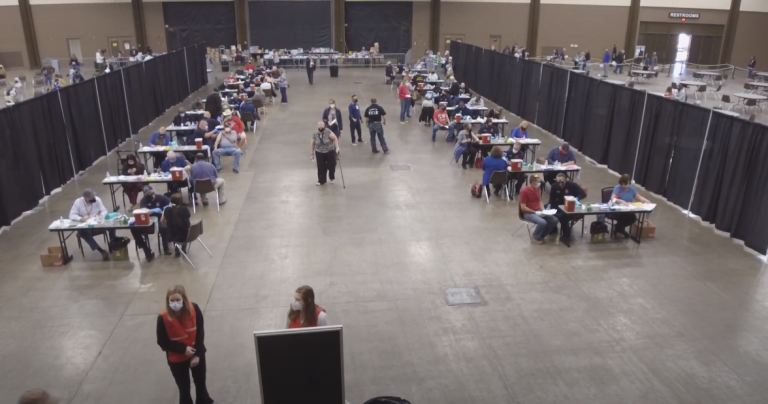 In the early days of the pandemic, Lubbock, Texas was hit hard – in fact, in October 2020, it had the 10th highest COVID-19 case rate in the nation. Fast forward to today, it now ranks near the top among the most vaccinated populations in the state. Kresge Emerging Leaders in Public Health grantee partners Katherine Wells, director of public health, and Madeline Geeslin, health promotion supervisor for the City of Lubbock Public Health Department, share what led to the department’s success and what the future of public health looks like in their community.

Collaboration at the Civic Center

In Lubbock, pretty much everyone is familiar with the city’s Civic Center. It’s where they may have had their prom, attended a graduation or performed in a dance recital. Now, it’s where the health department, in collaboration with two local hospitals and the police and fire departments, are vaccinating approximately 500 people an hour.

It took a lot of planning and coordination, but everyone came together with the mission of getting it done, Wells said.

Wells and Geeslin noted that the health department has been working closely with the fire and police departments since the start of the pandemic.

For example, light duty police officers had been helping with answering phones and contact tracing. The fire department assisted with running a call center and a testing site.

As the situation has evolved, so have the needs. Now, for example, a member of the fire department serves as a volunteer coordinator at the Civic Center, managing more than 100 volunteers each day.

While minor logistical hiccups have happened, the teams immediately adapted and made changes. What made the whole process go much more smoothly were the pre-existing relationships that the health department has with other agencies in the community, Wells said.

“When we began the ELPH program, so much of our initial project was around building this system of linkages in the community. Meeting with people at the police department and the local hospitals to figure out where the resources are, who needs the resources and get people who need the resources to the right place,” Wells explained.

“Prior to the pandemic, we already had those relationships established with a variety of different community partners,” Geeslin said. “So when COVID happened, the hospitals, police department, fire department and universities all knew who the public health department was. They wouldn’t have known that five years ago,” Geeslin said.  “We really put in the work.”

“Without doing that work in the two years prior to COVID we would not be in the place we are now,” Wells said.

“In order to effectively vaccinate this many people, you have to work and partner with other agencies. Public health can’t try to do it on their own. It’s about reaching out to those partners who want to help, and accepting that help, or supporting them in whatever effort they are doing if it’s already working,” Geeslin said. “You have to leave your ego at the door.” To encourage even more people to get vaccinated, the Health Department has launched a campaign featuring local people sharing their reason for why they got vaccinated on area billboards and buses and is working with local universities to recruit athletic coaches to get behind the effort.

The pandemic has launched public health into public consciousness, Wells and Geeslin said. Public health and the department’s work have been front and center throughout the community.

“There is still a lot of education that needs to happen, but even if they don’t know all the work that we do, they know now that the work we do matters,” Geeslin said.

But because of the pandemic, so many other department priorities have been put on hold, they noted. Looking ahead, Wells and Geeslin look forward to taking the experience they’ve gained working with different agencies and using that as a springboard to develop new relationships with other organizations.

“We have been growing in so many different areas these last three years. We want to do more work with our police department. We want to work with the codes department on making sure that low income housing meets the same standards as other housing. We want to talk to the hospitals about collaborating in a community needs assessment,” Wells said. “We want to leverage our relationships to take some big steps toward moving health forward in the community beyond just what the public health department can do.”

“It doesn’t take millions of dollars to get health departments situated where they feel like they have capacity. It took the ELPH program to get the ball rolling that really enabled us to be equipped to handle the pandemic,” Wells said.

To learn more about Lubbock’s vaccination effort, watch the video below.