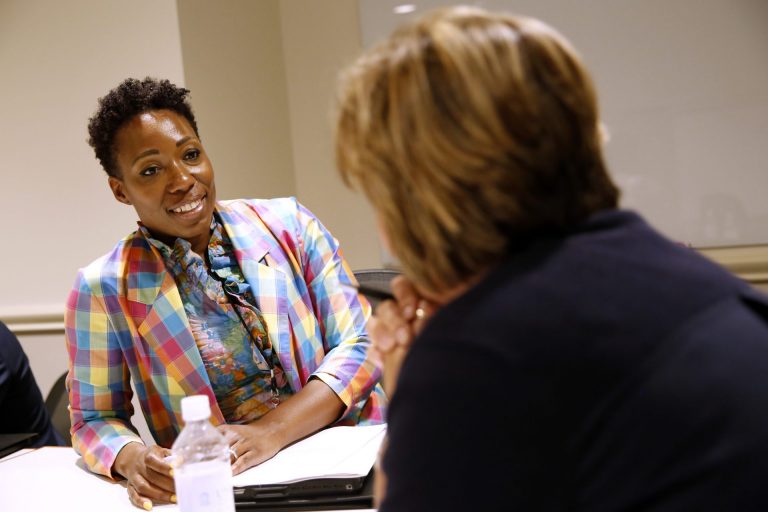 In order to solve a problem, you first have to identify it. In 2020, local health departments in dozens of cities and counties around the country have done just that and named racism as a public health crisis.

It is an important step to spur change not only within local government agencies, but across sectors and throughout the community. But it is only a first step. Taking action requires working collectively to address a wide range of challenges with a racial equity lens.

As part of a virtual event that brought together all three cohorts of The Kresge Foundation’s Emerging Leaders in Public Health program, three public health leaders shared how they are confronting structural racism in their communities and discussed what other public health leaders can do to advance a racial equity framework at their agencies.

Patty Hayes, director of Public Health – Seattle and King County, leads one of the largest health departments in the country. When COVID-19 began to spread, Seattle was one of the country’s first epicenters, with communities of color being hit hardest by the virus.

Centering the department’s work around equity and social justice for nearly 15 years, Hayes said that she learned it is important for public health departments to talk about inequities and look for ways to partner with communities, listen and amplify their voices.

In response to the crisis, Hayes said that her team took the opportunity to begin to setting and joining tables.

“We created a pandemic community advisory committee, more than half of which was BIPOC community organizations, to give us advice. Our mask mandate was actually shaped through conversations with that committee,” Hayes noted.

“By the time the county executive and I declared racism as a public health crisis, we had had all of these conversations, heard what people had to say and could move forward together on a policy agenda to protect public health,” Hayes said.

As commissioner of health for the City of Milwaukee, Dr. Jeanette Kowalik, now the director of policy development at Trust for America’s Health, declared racism as a public health crisis in 2019, making Milwaukee the first city in the nation to make this declaration.

“As public health professionals, we know how behavior change works,” Kowalik said. “When we’re trying to create programs and interventions, many models look at first identifying or acknowledging the problem. Then, you move through various action steps.”

Declaring racism as the problem was necessary to bring awareness that there is a problem, Kowalik said.

“We wanted to acknowledge to our Black and Brown communities that we’re listening, that we know there’s been a long history of segregation and discrimination and various forms of racism in the city of Milwaukee and in the county. It made the city accountable. We declared it, but it also made us begin to take action,” Kowalik said.

The city became members of the Government Alliance on Race and Equity (GARE) and began working as part of a municipal GARE team to address racism.

When the pandemic struck, the increased awareness of the impact of racism on health outcomes helped shape the department’s response to COVID-19, Kowalik said.

“We were one of the first cities and counties to share publicly our COVID-19 data by race and ethnicity. We started talking about it,” Kowalik said. “This was not epidemiology as usual – what we were seeing was racism playing out through the pandemic. From access to personal protective equipment to the types of housing people had available to them, you name it, we were seeing COVID ravage our Black community and then spread to the city’s Latinx community.”

Putting a Framework in Place

If government has played a fundamental role in creating and exacerbating racial inequities over centuries, then it needs to play a role in resolving them.

During this tenure as co-director of the Government Alliance on Race and Equity (GARE) and vice president of institutional and sectoral change at Race Forward, Dwayne S. Marsh, president and CEO of Northern California Grantmakers, worked with more than 200 local, regional and state entities to advance racial equity through policies, practices, and public investments.

Marsh said that as communities around the country began to have conversations about racial and social justice, health departments were often at the leading edge of the discussion.

“When trying to solve public health issues, we talk about how it’s the social determinants of health that affect communities. But what’s creating those social determinants? When you’ve gone upstream, there is something beyond that and you hit this wall. That wall almost always was race,” Marsh said.

The frame that emerged from these discussions is around normalizing conversations on race, operationalizing systems and organizing for change.

“If you can normalize that conversation, then you can start to operationalize systems, start to look at data as the evidence and use it to point to where you need to make change and what systems have to be adjusted,” Marsh said.

Often once that happens people realize that they need to organize not just within their own organizations and entities and jurisdictions, but really partner with community, he explained.

But while government has to be at the center of the solution, it can’t do it alone. This is where philanthropy and the private sector and other sectors come into play, Marsh noted.

To create change, public health has to be willing to look at itself, Hayes said.

In Seattle, this has meant examining all public health department practices and programs.

“This means we are changing the way we do contracting. We began paying for community members to participate in groups. We are giving technical assistance on how you apply for government funding. We’ve changed our recruitment so we can hire and have a more diverse workforce. And we are really looking at programming and asking ourselves if that programming matches what the community says it needs,” Hayes said. “They can sometimes feel like small steps, but they change the culture within public health.”

There is strength in numbers, so it’s not only about intentionally developing policies that will promote equity but encouraging other communities to do the same, Kowalik said.

Organizations must also recognize that communities have a wealth expertise and experience, Marsh said.

“Give people decision making power. Give them ownership of the work. And, if you do that, you’ll see real momentum in community impact. That’s a tall order from a government or philanthropic perch, but it’s the kind of work we need to do,” Marsh said. “For foundations, the more authentic relationship that you have with community the more you understand the complexity of community and how you can be a proper partner and invest in a way that lifts up leadership.”

“A lot of times public health has been in a place where we think we know what needs to happen. You’ve got to get rid of the word engagement. It’s not about engaging anybody. It’s about empowering. It’s about lifting up. It’s about hearing and it’s about doing something with what you hear,” Hayes said.

This work cuts across geography and political ideology. It’s about equity in communities. From small college towns to large cities, leaders are finding that if they don’t talk about race, they won’t meet their mission to serve all of their residents.

While there are a lot of needs to be addressed, there is power in conversation and leadership and community, said Phyllis Meadows, senior fellow with Kresge’s Health Program. By listening, learning, and then taking action, public health departments can improve people’s health and well-being.