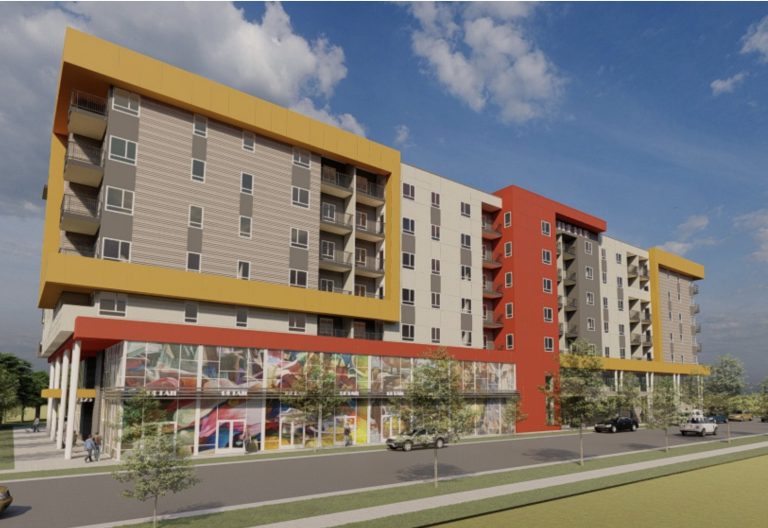 We all have a right to healthy and culturally appropriate food. However, decades of underinvestment in infrastructure and community resources have left residents in many low-income neighborhoods around the country living without any grocery stores nearby. Without these grocery stores, residents are often forced to rely on small markets and corner stores for necessities.

In Denver, Colorado, Montbello is one of the city’s larger communities, with more than 36,000 residents and 8,900 families. Over the last several years, it has also become one of Denver’s most diverse areas – 61 percent of residents are Latino and 24 percent are Black.

Though rich with cultural assets, knowledge and expertise, Montbello faces several challenges, including limited access to healthy food, high unemployment rates, rising home and rental prices, the growing risk of gentrification and displacement, as well as a lack of public spaces. When changes were made, often they were implemented without community input or even in direct opposition to community members’ stated interests.

Recognizing the need for a committed process of organizing residents to raise their voices, a multiracial, multi-ethnic group of Montbello residents and stakeholders began meeting in mid-2013. Calling themselves the Montbello Organizing Committee, (MOC) they began training in community organizing, talking with community members, and establishing the foundation for the organization that exists today.

Over turkey and tamales, MOC first engaged the community in fall 2014 at an event to celebrate community assets and identify collective issues. Spurred by the closing of the only full-service grocery story in the area, the impending development of RTD commuter lines that would divide the city and the elimination of neighborhood bus routes, residents identified retail development, transportation and community enhancement as their top priorities. Teams of residents started meeting regularly and got to work. Their vision? A grocery-anchored cultural arts center in the heart of the community.

“We had just finished the process in our community where we had done all these interviews and surveys and meeting with stakeholders and it had all culminated in this menu of eight major challenges in our community,” explained Donna Garnett, executive director of Montbello Organizing Committee. “We were contemplating how to address those and how many of those we could tackle on behalf of the community at a time, and then lo and behold, there was an opportunity with FreshLo.”

One of 23 FreshLo projects launched nationally with funding by The Kresge Foundation and other philanthropic partners, Montbello’s FreshLo Hub started as a plan to bring in a grocery store and is now a multi-million-dollar economic development initiative designed to revitalize the neighborhood.

Partnering with a mission-aligned local grocery operator, the FreshLo Hub’s grocery store will provide healthy, affordable, and culturally-relevant foods. In addition, the store will create jobs for local residents. MOC also partners with an urban farm that provides fresh produce to residents and runs a seasonal weekend farmers’ market at the FreshLo Hub site.

The FreshLo Hub is also at the heart of a walkable loop that connects the community to services, retail, and arts. The FreshLo Walkable Loop connects various community assets on a six-mile walking path. Along the Loop, residents can enjoy locally-created art celebrating the diversity of the community.

Partnering with Colorado Black Arts Movement also known as FreshLo Arts, a performance and presentation space will become a community destination for cultural arts. Gallery, rehearsal and recital rooms will surround the theater and spaces will be available for nonprofits and arts groups to provide classes for the community.

In addition to the grocery store and the arts space, the Hub will offer at least six small retail spaces for resident-owned businesses. Shops may offer products from local artisans and entrepreneurs. Mental Health Center of Denver will occupy office space and provide mental health services to Montbello residents.

Above the market, theater, and retail and office space sits 97 units of affordable housing. Units will range in size from one- to three-bedroom and will be rented to residents in the 30% – 70% AMI qualifying range. With a variety of floor plans and sizes, the apartments will house 160 – 230 residents.

Completion of the Hub comes with an estimated price tag of $65 million from a variety of sources including tax credits, philanthropic contributions, and financing. MOC is raising $20 million in philanthropic support from a combination of capital contributions and program-related investments (PRIs). The PRIs are low-interest, subordinated loans primarily from foundations.

“The team is community driven and locally focused but has also been able to collaborate effectively with so many different organizations at multiple levels to make all of this possible,” said Stacey Barbas, senior program officer with Kresge’s Health Program.

So they are well on their way to making the Hub a reality, but are still raising funds. MOC expects to break ground on the project in 2022.

Rent from housing, office, and retail tenants will cover operations and loan servicing and make the project self-sustaining over time.

What was once a volunteer-led organization now has seven employees and has created 43 jobs in the community.

“We started with $5,000 in the bank, and now we have a budget that exceeds $2 million annually. Of that money, 79 percent goes straight back into the community. We’re proud of that and feel that that’s life changing for people,” Garnett said.

Whether it’s working with community-based partners on programming for children during the summer, or providing leadership development to local entrepreneurs, MOC stays connected to the community and brings in additional resources so partners can quickly respond to needs as they arise.

For example, MOC worked with over a dozen organizations to secure more than $1 million to provide much-needed, culturally-responsive mental health services for residents.

MOC is recognized for its model of community representation—being a resident-led, diverse organization isn’t an initiative, it’s the model,  Barbas said.

“I’m proud of our activities, outcomes, the building itself, the amount of funds we’ve been able to leverage into our community, but the thing I think I’m most proud of is that we have set for our entire city a model of what it means to engage with the community, regardless of what the issue is,” Garnett said.

To help communities survive crises, trust and invest in their leadership