Rapson: What Detroit must do to sustain its solvency 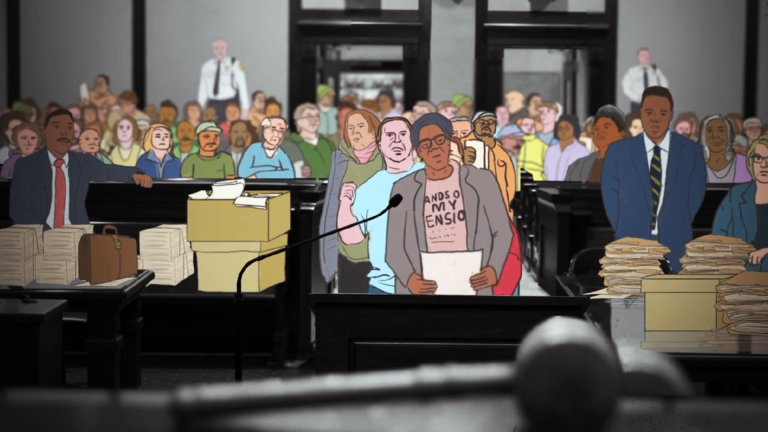 The film "Gradually, Then Suddenly" uses a combination of animation, interviews and dramatic reenactments to tell the story of Detroit's municipal bankruptcy and the Grand Bargain.

As of this week’s sold-out in-person and virtual premieres, some 2,000 residents of Southeast Michigan have seen Gradually, Then Suddenly, the gripping and — I underscore — timely documentary that traces the 16 months in 2013-14 in which we almost lost our city to the largest municipal bankruptcy in American history. More Detroiters will be able to see the film free-of-charge next week, in advance of a prospective nationwide release.

The film recounts the near-miraculous tale of creativity, resilience and courage that saved Detroit from the black hole of creditor claims against city pensions, art works and municipal assets. As producer Sam Katz promised when he approached us to help with funding, this film makes the complexity of the bankruptcy understandable without losing sight of the historical context of the city’s slide into insolvency and its costly impact on residents. It captures the high-stakes courtroom clashes through to the $800 million Grand Bargain — to which the Kresge Foundation contributed $100 million — that became the linchpin of a consensual resolution, sparing the city a decade of immobilizing litigation.

Most importantly, Gradually, Then Suddenly captures the pain and cautious optimism with which Detroit exited bankruptcy. It quotes U.S. Bankruptcy Judge Steven Rhodes’ message to Detroiters as he approved the final plan of adjustment: “I urge you now not to forget your anger. Your enduring and collective memory will be exactly what will prevent this from ever happening again.”

We lose sight of those words today at our peril.

The plan of adjustment granted us a window in which to put our financial house in order, to design a path forward. The implicit idea: A prudently managed city providing high-quality services to residents would grow its population, encourage new businesses, and keep its books in balance. Success would catalyze more success.

Indeed, the sweep of success over the last decade has been breathtaking.

Mayor Mike Duggan has rightly earned his reputation as the Fix-It Mayor. City finances are capably managed. New mechanisms of accountability and transparency are in place. Streetlights are on. Blighted structures are being demolished. Parks are being upgraded. New housing and commercial projects dot the landscape — in downtown and Midtown, and in reviving neighborhoods across the city. More Detroiters are benefitting from bold workforce development initiatives. Federal recovery and infrastructure dollars hold the promise of transformative and enduring impact. Bond ratings have increased. And a great deal more.

The other side of the ledger is sobering. Even accounting for the undercount of the 2020 Census, the city’s population continues to decline, including for Black middle-class households. A city long proud of its home ownership has become a city of majority renters. Despite new commercial and industrial jobs, Detroit has the second-highest official poverty rate of any big city — more than 30%. A downtown that seemed to be hitting its stride faces deep uncertainty in a post-pandemic world of flexible and remote work.

We continue, moreover, to be weighed down by the cascading consequences of high property taxes, as they drain wealth, provide a disincentive to development, and fuel the relentless machinery of housing foreclosures. We still haven’t found a recipe for residents to generate and sustain wealth.

Which brings us back to Judge Rhodes. Because we are working against the clock.

The bankruptcy’s plan of adjustment delayed for 10 years — until July of 2024 — the city’s obligations to restart its annual payments to meet unfunded pension liabilities. Those payments, if not well-managed, could threaten funding that is currently earmarked for essential services and quality of life investments. Fortunately, the Duggan Administration is planning ahead so that Detroit will have a smooth transition for meeting these obligations.

We’ve received a temporary life-preserver from the federal waterfall of COVID-19 relief, recovery, and infrastructure dollars. Not because they can be used to fund pension liabilities — they cannot. But instead, because they can be applied to other parts of the city’s budget, enabling creative reallocation of capital among key activities. The challenge is obviously how to avoid creating an expenditure pattern that will have to be abandoned soon after the pension payment obligations kick in.

It can be done. But we need to devise creative combinations of public, private and philanthropic funds that will ensure that the efforts are both transformative and enduring.

What’s to be done?

We have only one way out: forging a suite of civic compacts among the public, private, philanthropic, and civic centers to undertake transformative investments and policies to enhance municipal revenue, reduce poverty, and generate wealth.

The good news: We can couple federal and state recovery dollars with municipal budget priorities and private and philanthropic capital to seize a once-in-a-generation opportunity. The outlines of what needs to be done are increasingly clear. Here are four community must-dos:

First, reform our property tax system. Our property tax system erects an obdurate structural barrier to the city’s long-term economic stability and health. Stated simply, we must create a city that allows residents to generate and sustain wealth, particularly Black wealth, if we are to succeed.

A recent study commissioned by Kresge suggests a blueprint for doing that. It proposes flipping municipal taxation on its head by reducing the burden on homeowners and others with developed properties and by increasing taxes on vacant or underutilized land to compensate We can’t move fast enough to determine whether this or some other reform can break the high-tax chokehold on our city.

Second, embrace innovative strategies to reduce poverty and build wealth among Black and brown Detroiters. Beyond removing the unfair weight of taxation on Detroiters, we need to deepen our public, private, and philanthropic commitments to clearly-marked wealth-building pathways.

Once the realm of academic theorizing, these strategies are being ground-tested in communities across the country. Our early efforts in Detroit have to be ramped up dramatically.

Third, seize on the catalytic potential of open space investments. The development of open spaces of all sizes — from pocket parks and neighborhood greenways to the revitalized riverfront — has been integral to Detroit’s revitalization. The growing commitment of federal, state, local and philanthropic dollars to complete the Joe Louis Greenway and the West Riverfront recognizes that these spaces are not only a down-payment on improving public health, but also also a powerful spur to housing and commercial investments.

Pledging federal and state dollars to create universal pre-K programs is a powerful start. The next step needs to be to ensure long-term investment structures that ensure that every child has access to a high-quality pre-school program, that early childhood providers are paid an equitable wage, and that all programs are governed by standards of high quality.

The Grand Bargain was a unique response to a crisis of the moment. Although the budget challenges of 2024 and thereafter may seem less pressing, they are not. We have both the time and the resources to start in motion a fly-wheel of capital innovation, programmatic audacity, and systemic reform that will reposition the city for long-term health and vitality. Anything less will breathe new, tragic meaning into Sam Katz’s film’s title — Gradually, Then Suddenly. We cannot allow that to happen.