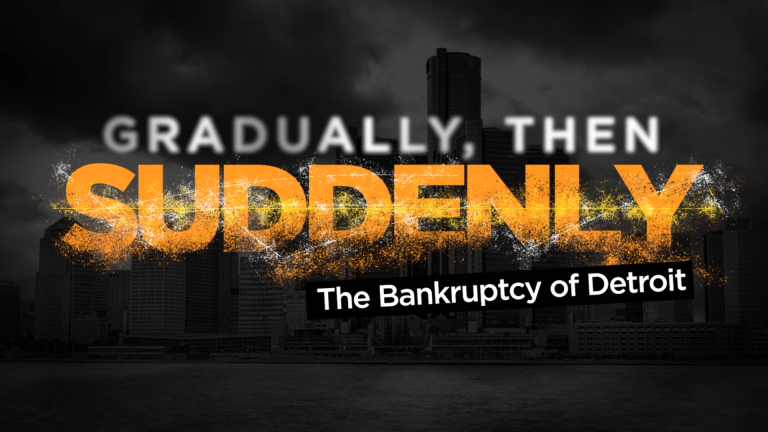 Kresge President Rip Rapson and other Detroit-area philanthropic leaders will gather Monday, May 2, to reflect on Detroit’s 2013-2014 bankruptcy proceedings and their impact on the arts and cultural sectors eight years later.

The panel follows the sold-out premiere of the documentary film Gradually, Then Suddenly: The Bankruptcy of Detroit. A major part of its story is the Grand Bargain in which foundations contributed $350 million to an $800 million fund that shielded the Detroit Institute of Arts from creditors’ claims and lessened the bankruptcy’s blow to city of Detroit pensioners. Monday’s noon-1:45 p.m. event is free, including a boxed lunch and link to view the film in advance — but registration is required.

CultureSource said the goal is to have the panelists “help contextualize the film in the current moment and have the  experiences in and dreams for investing in arts and culture in Detroit.”

More than 2,000 viewers saw the film in person or virtually during Wednesday night’s premiere as part of the Freep Film Festival. Producers History Making Productions have arranged for four subsequent free screenings in and around to foster discussions of both the film and the issues it raises.Tickets can still be reserved for two of those: Sunday, May 1,  7:30 p.m., Maple Theater, Bloomfield, (RSVP to  [email protected] mapletheater.com) and Wednesday, May 4, 7 p.m., Michigan Theater, Ann Arbor (RSVP to [email protected]).

CultureSource served as fiscal sponsor for the film producers, and The Kresge Foundation helped with funding. The film won the 2021 Library of Congress Lavine/Ken Burns Prize, which supplied $200,000 in finishing funds.