Rapson: The cavalier use of racist ideology and the horrific massacre in Buffalo 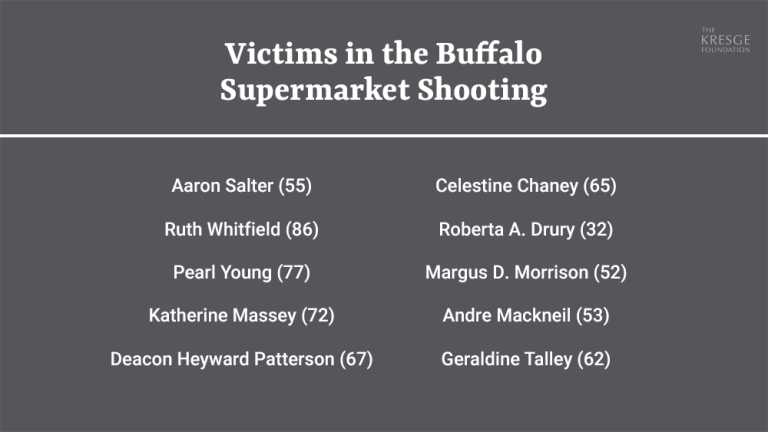 Our hearts are sick, our emotions spent, our anger and disgust difficult to contain. A deeply mentally disturbed young man meticulously planning and carrying out a massacre of beautiful and innocent souls. A white supremacist spewing a vile and incomprehensibly fearful ideology onto the pages of a “manifesto.” An act of cancerous ideological metastization spawned by extremist platforms to be sure, but also by unscrupulous, self-promoting, Joseph McCarthy-ite television commentators, congressional representatives, former presidential advisers and others.

All beginning with incoherent impulses of confusion and alienation . . . which coagulate into poisonously potent words of hatred . . . which are inflamed by echo chambers of racist fearmongering . . . and which finally combust into monstrous, inhuman actions of demented grandiosity.

In Buffalo, the world has lost the wisdom, kindnesses, and the love of ten of God’s children:

It was not long ago that the names would have come from Pittsburg’s Tree of Life Synagogue, where eleven Jewish worshippers were murdered . . . from Charleston’s Emanuel African Methodist Episcopal Church, where nine African-Americans were cut down in 2015 by a white supremacist . . . from a FedEx facility in Indianapolis, where eight people, including four Sikhs, were killed by a shooter in 2021 . . . from an El Paso Walmart, where the lives of twenty-two people – most Mexican or Mexican-American – were cut short by a AK-47-wielding killer.

And the list could go on and on and on.

It undercuts my deep desire to mentally and emotionally compartmentalize Buffalo into the act of a single deranged individual motivated by a demented belief system peculiar to him.

Because just the opposite dynamic is in play. White supremacist racial hatred has latched onto the pseudo-construct of the “Great Replacement” – a codeword favored and repeatedly amplified by television personalities, members of Congress and others. Its currency was underscored by a poll last year that found that nearly half of Republicans agree with the great replacement construct.

Distilled to its essence, the idea is that there is a plan to substitute out “native-born Americans” with immigrants.

Here is how The New York Times describes it:

Replacement theory, once confined to the digital fever swamps of Reddit message boards and semi-obscure white nationalist sites, has gone mainstream. In sometimes more muted forms, the fear it crystallizes — of a future America in which white people are no longer the numerical majority — has become a potent force in conservative media and politics, where the theory has been borrowed and remixed to attract audiences, retweets and small-dollar donations.

On the one hand, it’s irresponsibly reckless and self-indulgently facile to attribute a particular act of violence to a body of thought resident on hate platforms. On the other hand, however, even without attribution, the direct thread is there. Buffalo was a racial hate crime perpetrated by a white supremacist radicalized by constructs such as replacement theory.  Full stop.

It is a tragically sad and dark day in America. Calling out the acts in Buffalo for what they are will not ensure that we won’t be subjected to that kind of evil again.  But not calling them out will ensure that we are.

We’ll do our part at Kresge. We can only hope and pray that those who have been cavalier and callous in throwing racist terms and ideas into circulation will do theirs.

Here is a list of Black -owned businesses in Buffalo and western New York that Step Out Buffalo created to promote and uplift the community: Guide to Black-Owned Businesses to Support in WNY