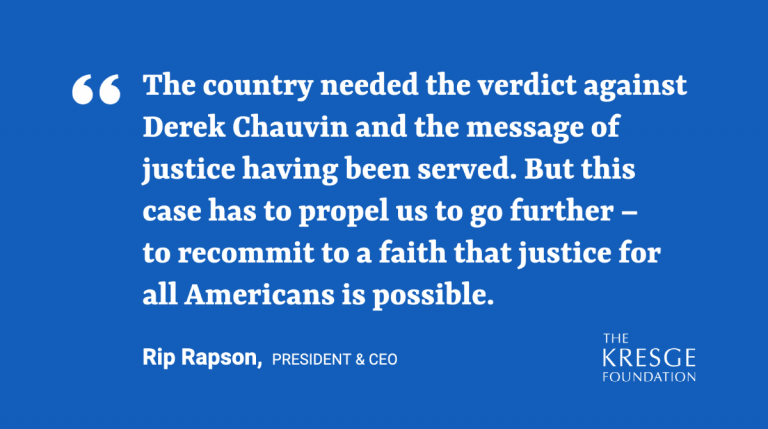 The verdict was returned in a matter of hours. Warp-speed by American justice system standards. After two weeks and three dozen witnesses, we have affirmed that killing a Black man lying on the pavement in handcuffs by putting one’s full weight on his neck for nearly ten minutes constitutes murder. Anything else would have been a travesty. Justice was achieved for George Floyd.

But justice remains unfulfilled for countless other people of color in situations less dramatically brutal, but equally violative – we need to look no further or farther than just up the road in Brooklyn Center, where a traffic-stop for insignificant cause transformed in a blink of the eye into another police officer taking another unarmed Black man’s life. The weariness, frustration, anger, and disbelief are beyond any human breaking point. But for our colleagues of color, the pain and trauma render these expressions utterly inadequate.

These are acts of abuse and inhumanity that cannot in our democracy – in any civilized nation – continue. But, tragically and horrifically, they will. With each one, an ever-deepening fissure of injustice. With each, an infection in the body politic that won’t be healed without a powerful and sustained upswell of commitment to dramatic change not just in our systems of justice, but in our structures of equity and opportunity . . . without uncompromising and thoroughgoing efforts at reconciliation among the nation’s racial and ethnic “castes” Isabel Wilkerson so powerfully describes . . . without unadulterated efforts to unwind the insidious and multifold legacies of oppression centuries in the making.

The country needed the verdict against Derek Chauvin and the message of justice having been served.

But this case has to propel us to go further – to recommit to a faith that justice for all Americans is possible. As much as our organization has done to advance opportunity and equity and justice, we need to do more. Our work is in its infancy.

Let me close with the moving statement of Vice President Kamala Harris:

This verdict is but a piece of it. And it will not heal the pain that existed for generations, that has existed for generations among people who have experienced and first-hand witnessed what now a broader public is seeing because of smartphones and the ubiquity of our ability to videotape in real-time what is happening in front of our faces. And that is the reality of it.”