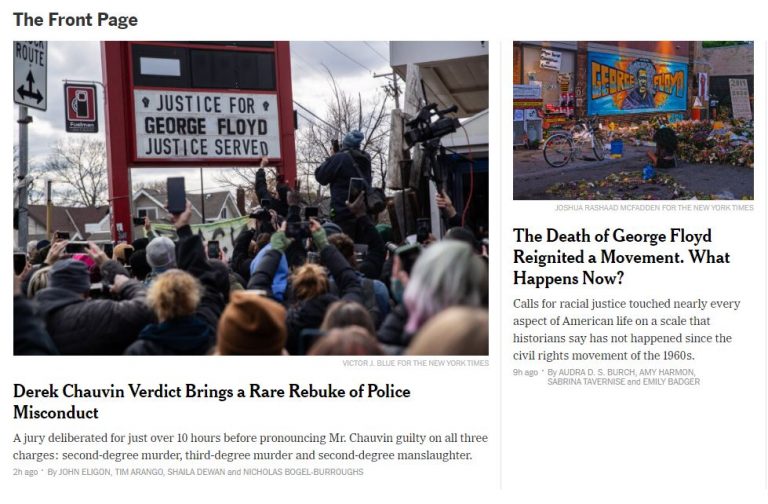 A snapshot of some of the headlines and stories from 'The New York Times' after the Derek Chauvin verdict.

In the midst of the extraordinary waterfall of commentary, celebration and prognostication following the conviction of Derek Chauvin, a remarkable set of headlines jumped off the page of The New York Times. They struck me as an uncannily accurate snapshot of the lingering unresolved and underlying issues the verdict raises, all interconnected in a complex web.

“Derek Chauvin Verdict Brings a Rare Rebuke of Police Misconduct”: There remains the haunting prospect that it took a ten-minute, unremorseful, knee-on-the-neck, fully-witnessed, unequivocal-violation-of-department-policy act of violence to convict a police officer. Our criminal justice system does –  profoundly, unfortunately – have a pretty solid track record of not charging, undercharging or acquitting acts of alleged police violence and misconduct. The system broke that mold in Chauvin. The question is whether that represents a breakthrough or an extraordinarily exceptional case. In the probability that it is a fuller dose of  the latter than of the former, we have a very long road ahead in reforming police protocols, undoing presumptions of “reasonableness,” breaking the wall of “blue silence” and myriad other obstacles to accountability and justice.

“Biden Calls Verdict a ‘Giant Step Forward in the March Toward Justice”: Particularly when seen in the harsh light of the verdicts that might have been rendered, but weren’t, this is a welcome embrace of the possibility that the energies catalyzed by Mr. Floyd’s murder, by the vigorous and competent prosecution of a police officer, and by the lightning speed of the jury’s verdict will create a momentum toward even greater progress. It is impossible to overstate the significance of the clarity and force of President Joe Biden and Vice President Kamala Harris’ statements following the decision. Setting a tone of empathy, compassion and respect for the national discourse . . . committing unequivocally to taking the first steps toward criminal justice reform through the George Floyd Justice in Policing Act . . . embracing the constructive power of racial justice organizing. All of these dimensions of federal leadership matter and matter greatly. Naming the issues of racial equity, justice, and reconciliation . . . dignifying and formally valorizing the energies necessary to confront those issues . . . .and laying a roadmap by which they can be systematically addressed . . . These may, indeed, be a “giant step forward in the march toward justice.”

“The Death of George Floyd Reignited a Movement. What Happens Now?”: Justice in policing must be wedded to justice in everyday life. As Vice President Harris noted, a measure of justice is not full justice. The protests that exploded in size, intensity, and reach after Mr. Floyd’s murder held the promise of a racial justice movement of a significance not seen since the civil rights movement of fifty years ago. The calculus of how to translate the moment into a movement is enormously intricate. But the infusion of philanthropic support, the heightened commitment of community organizers to stay the course, and the explicit recognition by public, private and other civic leaders of the indispensability of long-term change all suggest that the foundational aspects of sustained and sustainable movement-building are in place.

”How the G.O.P. is Creating Harsher Penalties for Protestors”: No need to embellish this. You can embrace and seek to constructively shape a tectonic social shift, or you can seek refuge in denial and go to work applying duct tape of the most vile kind. The latter course might hold for a while, but will inevitably be swept into the same historical trash heap occupied by past efforts that refused to come to terms with change movements grounded in the dignity of all people.

“Teenage Girl is Fatally Shot by Police in Columbus”: So, it’s not over. We knew that. But to have a reminder within minutes of the Chauvin verdict is sobering, depressing, recentering. We’re back full circle – we still need police reform, still need to continually reaffirm a commitment to racial justice, still need to build enduring movements, still need to combat small-minded attempts at repression of the rights essential to realize a fully just society.

And these are only five of today’s headlines. There were many others. We have our work cut out for us.