Rapson: DeVore will bring his experience as ‘ardent champion’ of kids, region to CFSEM 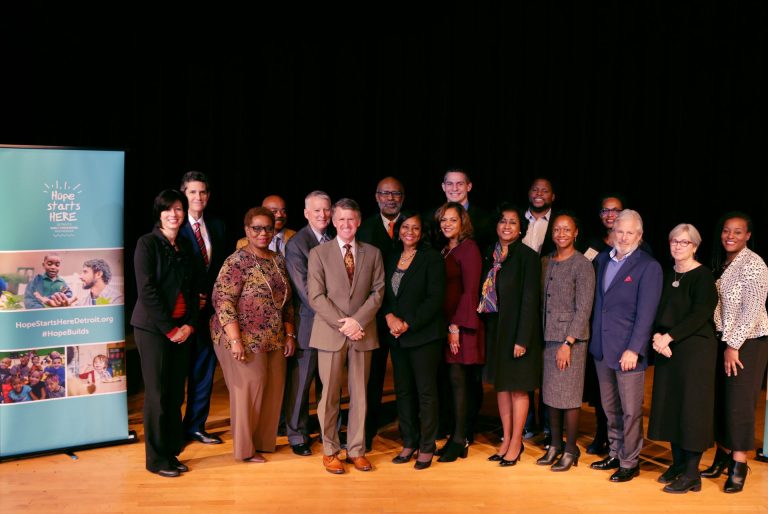 Ric DeVore, fifth from left, poses with fellow Hope Starts Here Steering Committee members in this file photo. On Feb. 11, 2022, DeVore was announced as the new head of the Community Foundation for Southeast Michigan.

The Community Foundation for Southeast Michigan brought a protracted search for a new president to an end today when they chose Ric DeVore to take the helm this spring. This is extraordinarily good news for the community foundation, for the region, and for Kresge.

Ric has been executive vice president and regional president of PNC Bank in Detroit and Southeast Michigan for twelve years. He also serves as the head of the local PNC Foundation. He has deep roots in Southeast Michigan, obtaining his Bachelor of Business Administration from the Ross School of Business at the University of Michigan and his Master of Business Administration from Wayne State. Before taking his current post, Ric was the credit executive for Commercial Lending for PNC, based in Pittsburgh.

Ric has been an ardent champion for early childhood development in Detroit, continually carrying the message of the importance of investing in early childhood into the corporate community. He has joined me, for example, in several panels focused on business audiences arguing both the moral and business case of ensuring that our community’s youngest residents enter kindergarten ready to learn – academically, emotionally, developmentally.

Ric has committed significant PNC resources to the Grow Up Great Initiative, which funds a variety of early childhood-focused activities, including arts, literacy, and parental engagement. He ensured that PNC would join with Kresge and Kellogg to expand the “Learning Spaces” grant program, which has funded the improvement of facilities for dozens of early childhood providers. And he was a founding member of, and active participant in, the Hope Starts Here Stewardship Board.

Ric has also embraced the need to strengthen family economic security in the city, and, in particular, in the neighborhoods surrounding Marygrove.

First, PNC has partnered with a variety of nonprofits – including the Marygrove Conservancy – to house mobile bank units in neighborhoods to expand access to banking services.

And second, Ric pursued plans for the creation of a new, creative version of “baby bonds” – called “Economic Mobility Accounts,” these would create infant savings accounts through early childhood center enrollment. Although PNC’s national office – in the midst of a merger and a pandemic – decided against launching this new product line, Ric’s advocacy has spurred Kresge and a host of partners to explore different ways of moving the concept forward.

Ric has positioned PNC as an indispensable partner in the realization of the pre-school through college vision at the Marygrove campus.

PNC has become the primary bank in helping the Marygrove Conservancy manage its liquidity and vendor payments.

It has also provided a ten-year, $57 million line of credit to the Marygrove Conservancy that will be indispensable to the continuing transformation of the campus. The financing, which was offered at terms significantly below market, will enable the completion of the renovations and code-compliance upgrades in the Liberal Arts and Immaculata buildings, as well as other deferred maintenance on campus.

Beyond the bank’s key lending role, Ric has also made PNC a major investor in Marygrove’s capital projects. It provided more than $7 million in equity by purchasing federal tax credits tied to the renovation of the Liberal Arts Building, which not only houses the high school portion of the School at Marygrove, but also serves as an arts and cultural hub for the entire Livernois/Six Mile neighborhood. And it is in negotiations with Kresge and the Conservancy to secure New Markets Tax Credits and Historic Tax Credits for the School at Marygrove’s primary and middle-school grades occupancy of the Immaculata Building.

Ric has used every ounce of his personal and institutional capital to respond and adapt to the changing needs of the Marygrove project. He has ensured that every part of the bank – from treasury services to credit to investment banking products – has aligned with Kresge’s efforts to anchor the revitalization of Northwest Detroit through a vibrant, multi-faceted Marygrove campus.

As I wrote about when her retirement was announced last year, Mariam Noland leaves the community foundation after 35 of extraordinary service, the founding and sole president of the organization. She has developed superb machinery for serving the nearly 800 donor-advised funds that make up the foundation. Under her leadership, the community foundation has earned a 96.4 (four-star) rating from Charity Navigator, with less than 10% of its funds going to administration. And the foundation is the financial holding vehicle for the Grand Bargain, New Economy Initiative, the GreenWays Initiative, and other community initiatives.

So, Ric will build on a sturdy, proven foundation. I nevertheless expect that we’ll see some change. The foundation’s Board has found in Ric someone who at once is tuned into the most pressing needs of the community . . . is capable of managing the financial complexities of stewarding hundreds of distinctively-oriented donor-advised funds . . . is an empathetic and effective manager of people . . . is comfortable with soliciting new donors to join the organization . . . is prepared to make hard choices about introducing greater strategic focus . . . is oriented toward expanding partnerships with other public, philanthropic, corporate, and civic organizations . . . and is committed to solidifying the foundation’s ground-wire to Detroit.

Ric brings all those qualities. The Community Foundation has chosen with skill, vision, and courage. We can’t wait to join them on their new path.