Q&A: Hive Fund shares how an equity-focus intermediary is working to advance climate justice in the South 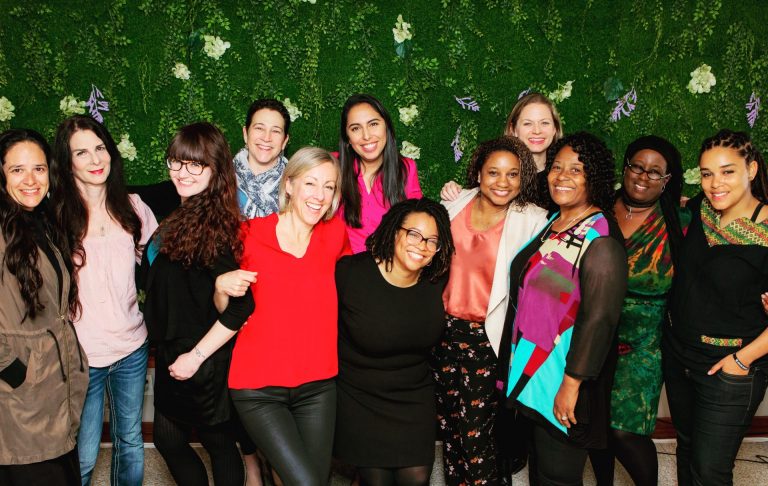 The Hive Fund Advisory Board is photographed during its annual retreat in early 2020.

Supporting frontline climate justice advocates is a priority for Kresge’s Environment Program. However, for many large national foundations, it can be a challenge learning which grassroots organizations on the ground in cities across the country are making great impact or may need additional funding support.

While Kresge supports some frontline organizations directly, the Environment team also has been increasing its funding of intermediaries set up explicitly to build relationships with frontline advocates, maintain a deep understanding of the local context in which those advocates are working, and seed larger grant funding into smaller grassroots organizations. These intermediaries help advance local work while also contributing to the national climate justice movement.

The Hive Fund for Climate and Gender Justice is one of our newest grantee partners doing just that: Strengthening the capacity of grassroots leaders to advance climate and clean energy policies grounded in gender and racial equity. The Hive Fund is a public foundation founded in 2019 to raise money and make grants to support organizations led by Black women, Indigenous women, women of color and others on the frontlines working to address the intersecting climate, gender and racial justice crises in the U.S.

The Hive Fund’s priorities include advocacy for strong policies, social movement-building to intensify public demand for change, civic engagement to build political power and hold decision-makers accountable, creative communications programs such as narrative shift and healing justice efforts. Although the Hive Fund works nationally, it has a focus in the Southeast, a region with high carbon emissions, significant climate risks, low philanthropic investment, and a long history of women of color building civic power to change systems.

In this Q&A feature, we’ve asked the Hive Fund’s Co-Directors, Melanie Allen and Erin Rogers, to answer three questions that reveal the level of impact the organization’s grantee partners have achieved in their communities.

Q1: Supporting organizations led by people of color and women is a priority for The Kresge Foundation. Can you share the demographic makeup of your leadership team and advisory board?

The Hive Fund is committed to participatory decision-making in every aspect of our work. We regularly consult with the eight members of our Advisory Board, whose expertise is rooted in philanthropy, community activism and lived experience at the intersections of climate, racial and gender injustice. Seven of the eight members are Black, Indigenous and women of color. Five are activists and advocates working for justice in the Southern U.S. Three are based in the Southeastern U.S. All identify as women/femme.

We also consult regularly with a Participatory Decision-Making Working Group comprised of activists in nine Southern states who have historically lacked access to funding and are essential to making progress in achieving climate justice. These leaders help shape grant strategy and practice. Members of this board work for non-profits that fundraise from foundations, so their insights on the challenges to accessing resources through institutional philanthropy have helped the Hive Fund shape grant practices that do not recreate the barriers they often experience.

Our leadership team consists of a Co-Director partnership between a Black woman based in the South and a White woman based in the Bay Area. This multi-racial and cross-geographic leadership team was intentional. We hope to model the deep collaboration across difference that’s possible when we’re intentional about disrupting white supremacy culture and leaning into our values in every aspect of our work.

Q2: Why do you think intermediaries are necessary and effective in the climate justice movement?

Addressing the climate crisis at a scale and in the time needed (cutting carbon emissions at least in half by 2030 and to negative by mid-century) requires transforming the systems of power governing who pollutes, who profits and whose lives are valued. Many Black, Brown and Indigenous communities and leaders are skilled, sophisticated and visionary campaigners for the kinds of systemic changes that lead to climate justice, yet these groups receive less than one percent of philanthropic climate funding.

Many endowed foundations struggle with self-imposed barriers that make it difficult to fund work led by and serving people of color, women and marginalized communities. Many white program officers, directors, presidents and board members don’t see or trust Black, Brown and Indigenous people and women as strategic partners and problem solvers. Program officers in more traditional foundations often struggle to make the case to their boards or presidents for funding multi-solvers – groups working on many issue areas at once.

The word “hive” conjures notions of collective activity and is emblematic of the collective action needed to address complex problems like climate change. Rugged individualism will not get us where we need to be. The Hive Fund works collaboratively with other climate justice intermediary funds, using complementary grantmaking models to fund healthy ecosystems of groups using a wide array of tactics – like the collective action of many bees. Bees are vital to life and through their pollination enable others to blossom – and are in fact responsible for pollinating one-third of the world’s crops.

Like the work of bees in nature, few people see the work of local community leaders, but we all benefit from the beauty of the blossoms and the products of their work. Our hope is that our work together as intermediary, funder and grantee partners and collaborators creates a future that is greater and more fulfilling than the sum of our individual efforts.

Q3: Can you share one example of a success story from a grassroots organization that the Hive Fund has supported?

The Hive Fund made its first grants less than a year ago, in the spring of 2020, to organizations working in Georgia and Texas. In both states, defending and expanding a reflective democracy is essential to creating the conditions under which progress can be made toward climate, racial and gender justice.

In Texas – the state that emits the most global warming pollution in the country – more than half the population is under age 35. Hive Fund grantee partners like the Jolt Initiative and Texas Rising help Black, Brown and Indigenous young people concerned about climate change get active in a range of civic engagement and movement-building efforts. Thanks to their work, alongside other organizers, youth voter turnout in 2020 was more than 600 percent higher than in 2016!

Hive Fund support has helped these youth organizing groups come together as part of a statewide climate justice coalition in Texas that’s co-creating a collective vision for a more just, equitable, and sustainable future and transition away from fossil fuel dependence and will move an ambitious communications and policy agenda forward in the coming years.

Another Hive Fund grantee partner, Air Alliance Houston, is a community-based organizing and advocacy group in the Port of Houston area. Thanks to the hard work of AAH members and others over the past months and years, they have moved the needle in a positive direction on a behemoth $7 billion highway expansion proposal. If the project moves forward as currently designed, hundreds of residents and business owners who live, work, learn and play along the northern stretch of I-45 will be displaced from homes, lose their jobs, and be exposed to more harmful air pollution, among many other devastating impacts.

The impacts disproportionately burden Black and Brown communities adjacent to the corridor, perpetuating a long history of environmental racism caused by highway expansion projects. Over the past several months, The Texas Department of Transportation and local leaders have kept negotiating but TxDOT has continued to show an unwillingness to commit to any tangible cooperation. However, following public demands for justice, both Houston and Harris County have recently indicated that they will not continue to lend their support to the project unless its shortcomings are addressed, and both submitted scathing comments to TxDOT and retained a law firm to explore their legal options in regard to the project. Thanks to AAH and their coalition partners and allies in government, hope is still alive.

Kresge’s support of the Hive Fund aligns with our commitment to the Donors of Color Network Climate Funders Justice Pledge. Through this new effort, we are vowing to invest at least 30% of our climate change funding in Black, Indigenous and people of color-led climate justice organizations and committing to even greater transparency in our overall funding. The Hive Fund collaborates with other equity-focused regranting intermediaries, including the Climate and Clean Energy Equity Fund, another Environment Program grantee partner. Several additional organizations including the Climate Justice Alliance, the Solutions Project, the Fund to Build Grassroots Power, the BEA Initiative and others are using similar models to regrant funds from large foundations to grassroots organizations led by Black, Indigenous and other people of color. Over the coming months, we will spotlight the work of several grantee partners working in this space on Kresge.org.

How Philanthropy Can Meet the Moment: The Vital Importance of Trust