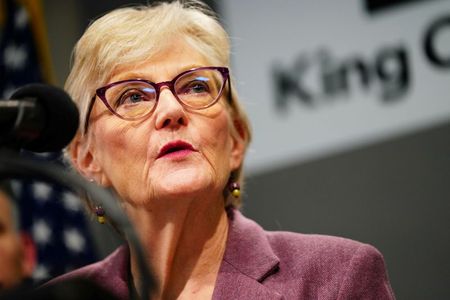 When COVID-19 began to spread in early 2020, Seattle, Washington was the country’s first epicenter, with communities of color being hit hardest by the virus. Less than 18 months later, King County was the first among the country’s most populous counties to hit a 70 percent vaccination rate.

That success was not due to sheer luck – it was the result of years of work by Kresge ELPH grantee partner Patty Hayes, director of Public Health — Seattle and King County and her team to center equity and social justice in their efforts and partner with communities to listen and amplify their voices.

In leading the health department, one of the largest in the country, since 2014, Hayes played a key role in guiding the organization through some of its most challenging times, including the most significant public health emergency in generations.

After more than 30 years in public health service, Hayes retired as director at the end of May 2021.

“As a former health director, I was fortunate to work alongside Patty in the Big Cities Health Coalition and as members of ELPH,” Kresge Health Program Managing Director Monica Valdes Lupi said. “On opioid use, community safety, and now COVID-19, her commitment to equity and racial justice were always front and center.”

Looking back on her career, Hayes shares her reflections on leadership, recommendations for the field and hope for the future.

Not a ‘special unicorn’

What happened in King County may be unique, but that doesn’t mean similar efforts can’t be successful in other cities around the country.

“I’ve been told that King County is unusual – that it is a special unicorn and what we’ve done here doesn’t apply elsewhere. But I don’t believe that’s true,” Hayes said.

Hayes offers four pieces of advice to public health officials as to what steps they can take and where to start:

The most important thing a public health leader needs to think about is how they approach building relationships with partners in the community.

It’s not just about establishing relationships, Hayes said. Leaders first must take a step back and assess how they view relationships.

“One of the first things for somebody to look at is how do you as a leader present yourself and sit in a space with folks or organizations where you hope or need relations.” she said. “Because what you want to do is develop a relationship where there is mutual interest and benefit, so that you can be there for each other over time. That’s really different than having one special project and going off and finding a partner to work with,” Hayes said.

While there may be differences of opinion, you have to look at what the vision is together and where there is a point of mutual agreement, Hayes said.

“For example, nobody wants homelessness, right? We all agree about that, so if we have outbreaks in homeless encampments, then it’s about the options for taking this action versus that to help solve the problem rather than meetings where issues are just rehashed and defensiveness prevents action,” she said.

Hayes and her colleagues focused on building relationships with both national partners at agencies like the CDC and local partners in the community.

The Health Department works closely with groups like the school directors associations, Sound Cities Association which is made up of the jurisdictions in King County outside the city of Seattle, and Challenge Seattle, which is an alliance of CEOs from 21 more than 20 of the region’s largest employers. First launched in 2015, Challenge Seattle’s CEO members are committed to harnessing its member companies’ resources and talent to find innovative solutions and take collective action.

During the pandemic, Hayes and her team gave regular briefings for these organizations.

“We made ourselves super available every week to do briefings. We became an ongoing conduit for the latest information and what that meant, and how we could work together,” Hayes said.

The role and relationship that the department had with the health and hospital systems also helped during the pandemic.

Hayes said Kaiser Permanente pivoted quickly to help with isolation and quarantine, as well as vaccination. In addition, Swedish Hospital partnered to develop an easy way for volunteers to sign up and worked with the city to set up a mass vaccination site at Lumen Field.

The health department also developed an academic relationship with the University of Washington Schools of Public Health and Nursing. As a result, students were able to work in the Health Department’s call center. Also, staff can have joint appointments with the university that allow them to share their expertise as instructors and also support the school.

“We have a willingness to build relationships, not just be the entity that tells people what to do,” Hayes said. “I think there’s a theme there for public health leadership that’s instructive.”

Outside of an emergency, public health needs to prioritize being visible in the community, Hayes said.

“We’ve heard the message over and over again that if public health is really doing its job, we don’t see it. That’s not going to work anymore,” Hayes said.

An integral part of being visible is having a consistent presence in the community and prioritizing how you show up, Hayes said.

As a Federally Qualified Health Center the department operates clinics throughout the community that offer services to support families, including several focused on maternal and child health.

So, when the pandemic hit, one of the reasons the department was so successful in its COVID-19 prevention and vaccination efforts was that it had maintained these centers with staff hired from the community.

“We were already there,” Hayes said. “We weren’t walking in and saying, ‘we need you to do this.’ We were trusted.”

It is not just about what public health can do programmatically, but how it fits into a larger governmental system.

“Within different entities, as issues were brought forward from the public health perspective, it is essential to consider  how does this issue  fit or viewed in their context?” Hayes asked. “It’s about looking at it from another perspective.”

When working to change policies, Hayes said it’s important to have a leader who is comfortable in the political realm.

You can’t always get 100 percent of what you want, which can sometimes be frustrating for staff, but Hayes cautions to not let the perfect be the enemy of the good.

“As you negotiate for a new or innovative solution, what’s an incremental step you can take while keeping your eye on the larger prize?” Hayes said.

In Seattle and King County, there are more than 300 nurses in the public health department, program managers in key areas such as mobile health and our Health Care for the Homeless network working throughout the region.

With that crucial expertise in running a clinic system already in place, Hayes was able to redeploy those vital assets for the pandemic response into the community this year.

“Because of that, I think we were able to move faster, which drew even more help and support from the community,” Hayes said.

With a workforce that has been decimated over decades due to funding cuts, Hayes said it worries her how much the public health workforce has been diminished nationwide.

As a nurse herself, Hayes admits she may be biased, but believes that nurses bring a unique skill set into public health leadership and that field needs more of them.

“Public health leaders sometimes get too far into the weeds. Nurses are good at taking what I call a balcony view, which is looking out over the situation and coming at it with a system view as neutral a view as possible.”

“Nurses have experience in reaching mutual agreements with patients and families and have the skills to be present with people in painful situations. They are often called soft skills, but they are not soft skills, they are leadership skills. And they are super important, because that’s how work gets done,” Hayes said.

While the COVID-19 pandemic is a stark illustration of what can happen when the public health system is not adequately funded, the U.S. also faces the ongoing challenges of the flu and other disease outbreaks, obesity, rising rates of sexually transmitted diseases and opioid abuse.

As the nation grapples with what the future holds for public health, Hayes said that it’s important to recognize the need for sustained funding not only at the national and state levels, but at the county level.

“Not only do we need the CDC and state departments of health, but we need a robust county-level structure,” Hayes said.

“Public health suffers because when we make things better, public health loses funding, as if you don’t need it again, but the core work needs to be maintained” Hayes said.  “The pandemic has made it clear that health disparities are deeply tied to system and institutional racism.  We need stable and ongoing funding to address these social determinants of equity to turn the trend around.

“That’s not how it should work. If there is something that is successful in the business community, they keep doing it. They fund it even more. I don’t know why we don’t think the same way about public health. Ten years from now, this should no longer be a debate.”

Strong relationships pave the way for vaccination success in Lubbock