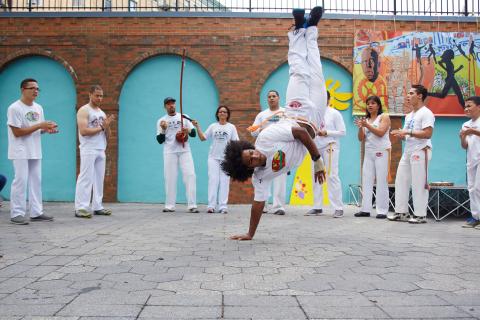 Detroiters working to improve their neighborhoods have a new ally with the opening today of ioby Detroit, the local office of a national organization that combines online fundraising with community organizing to support citizen leaders in small-scale projects that can have big impacts.

New York-based ioby (In Our Backyards) today announced that the office in New Center will be staffed by two “Detroit action strategists” who will connect local civic and neighborhood leaders with the organization’s online and offline tools and resources to plan, fund and implement projects.

The launch is made possible with support from the Ford Foundation and The Kresge Foundation.

“We want to support Detroiters with brilliant ideas for fast projects,” said Erin Barnes, ioby’s Executive Director, “Our Detroit action strategists will do the crucial work of connecting leaders to each other to build mutual support and learning so together we can make Detroit even stronger.”

“Many people have heard of crowdfunding,” said Barnes. “We call what we do ‘crowd resourcing,’ meaning that we use an online platform to connect neighborhoods with various forms of capital – including cash, social networks, in-kind donations, volunteer time and advocacy – for a cause or project.”

Founded in New York City in 2009, ioby has helped neighborhood leaders in more than 100 cities and towns raise more than $2.3 million in what it calls “citizen philanthropy” for more than 750 local projects ranging from schoolyard compost programs to pop-up bike lanes, from playground improvements to public art. On average, project leaders raise just over $4,000 in small donations that largely come from their own neighbors.

ioby – whose name is conceived as the positive opposite of “not in my back yard” or NIMBY – has offices in Brooklyn, N.Y., and Memphis. In addition to the Detroit office ioby today announced the opening of new headquarters in Cleveland.

“Anyone from anywhere in the US can use ioby’s platform and services, but we are actively expanding in communities where we can make the greatest possible impact in helping neighbors make positive change – like Memphis, and now Detroit and Cleveland,” added Barnes.

“There are many, many Detroiters who know exactly the kind of modestly sized projects that can quickly impact the quality of lives in neighborhoods,” said lifelong Detroiter Rhiannon Chester, who is a social justice master’s student at Marygrove Colllege and one of the two new ioby Detroit action strategists. “They need support and tools –and that’s what this platform brings them.”

“One of the most exciting challenges in Detroit today is helping neighborhood organizations build the capacity to effect positive change,” said Hogle. “Kresge Innovative Projects: Detroit and ioby are complementary efforts, with one supporting larger projects led by neighborhoodbased organizations, and the other smaller projects envisioned by resident leaders in neighborhoods.”

“The Ford Foundation has longstanding interests in community philanthropy and in Detroit’s revitalization, and ioby is at the intersection of these burgeoning fields,” said Chris Cardona, Ford Foundation program officer. “We’re invested in both ioby’s growth nationwide and its launch in Detroit, which brings an exciting new platform that can complement and hopefully enhance the many initiatives rising up from Detroit’s neighborhoods to ensure equitable development and an engaged citizenry.”