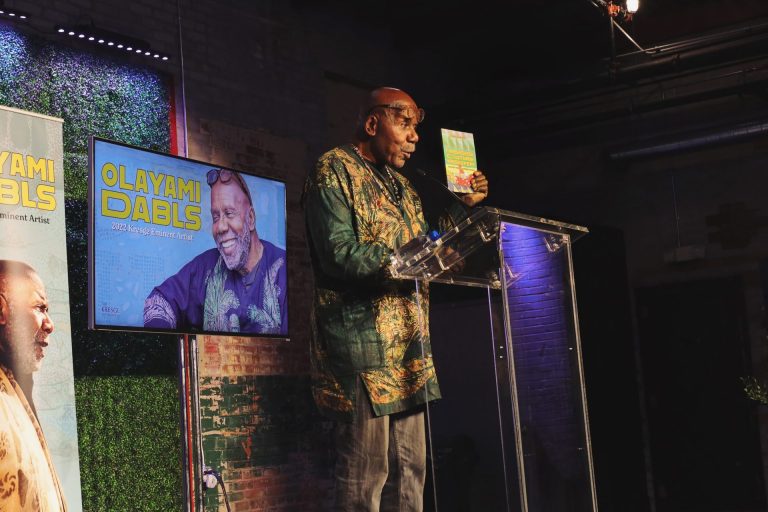 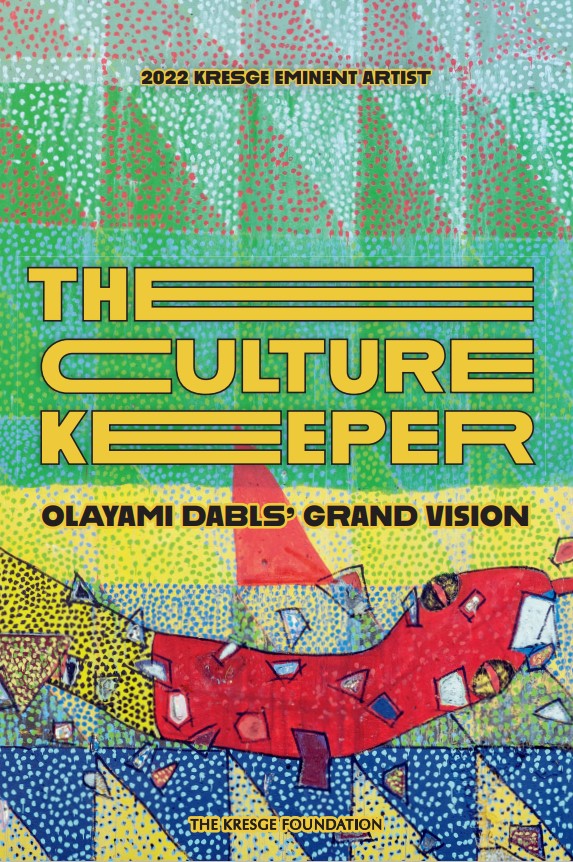 It is a mistake to think of him as an artist, he insists. Rather consider him a storyteller “having fun with history,” spinning tales through the mediums of beads, jewelry, paintings, collages, sprawling sets of large-scale sculptures, multistory murals … and finally a campus of symbol-splashed buildings known as the MBAD Bead Museum on Detroit’s west side.

The story of this storyteller, the 2022 Kresge Eminent Artist, is told in the monograph “The Culture Keeper: Olayami Dabls’ Grand Vision.” The amply illustrated, 128-page, Kresge-created book was presented to Dabls and released to the public in a small ceremony Tuesday evening in Detroit’s Eastern Market. The monograph is available for order at no cost while supplies last and for download in perpetuity.

Kresge President Rip Rapson praised Dabls for creating places “for both free thought and deep connections with the African past. His talent has opened up spaces for all of us to step into with our full hearts and minds and imaginations.”

And Rapson placed Dabls in the tradition of the previous Eminent Artists, beginning with painter-sculptor-muralist Charles McGee in 2008: “Whatever inner needs feed their work, whatever internal struggles and external challenges they wrestled with to express themselves, in the end, each Eminent Artist has found purpose greater than themselves.”

Kresge Eminent Artist program annually honors one individual for a lifetime of contributions to his or her chosen art forms and the cultural communities of metropolitan Detroit. The honor includes the creation of a short film under the auspices of Kresge Arts in Detroit (which administers the award), the creation of monograph by The Kresge Foundation and a no-strings award of $50,000.

This year, the creation of the monograph was, for the fourth time, led by creative director and editor Nichole Christian and art director Patrick

“Olayami Dabls is the epitome of an exclamation point and a question mark all at once,” said Christian. “What he’s created is singular in the minds of people around the globe.  But the questions of why and who Dabls is, that’s the real wonder.

“From its title to its size, The  Culture Keeper  is a very intentional  attempt  to see the place he has created in a more intimate and challenging way, through the mind of the man. I hope the book adds another dimension to his alchemy and his imprint on Detroit.  No one can deny either.”

College for Creative Studies President Don Tuski, speaking at Tuesday’s event, praised Dabls for his commitment to learning and sharing what he’s learned, and for creating a space in his museum complex for creating community. (The Kresge Arts in Detroit office that administers the Eminent Artist, Kresge Artist Fellows and Gilda Awards is part of the college.)

House, speaking in words similar to those in the book, praised Dabls as a community elder, affectionately referring to him as “Babba.”

“Babba’s aspirations have materialized on the corner of Grand River Avenue and West Grand Boulevard and built an environment where we can meander, experience rootedness, and welcome the love energies that he has invested there. How grateful we are to have a poet and an artist is an artist and poet.” she said.

Dabls, for his part, spoke of his slow journey to an understanding of himself and his culture as an African American. He was 23, when at Highland Park Community College he first learned to think of himself as African. “I get all this time not realizing that I was connected with a particular cultural group,” he said. He spoke of his route to become a storyteller to share that knowledge, how his MBAD African Bead Museum and his monumental works like “Iron Teaching Rocks How to Rust” continue that quest.

As to the monograph, as a businessman he had a problem with it. One the lessons he learned in business: “You don’t give away anything.” So, the monograph distributed at no cost, he said, “That hurts.”

But not enough to stop him smiling and autographing copies for the well-wishers who lined up in front of him at the signing table for some time into the evening.