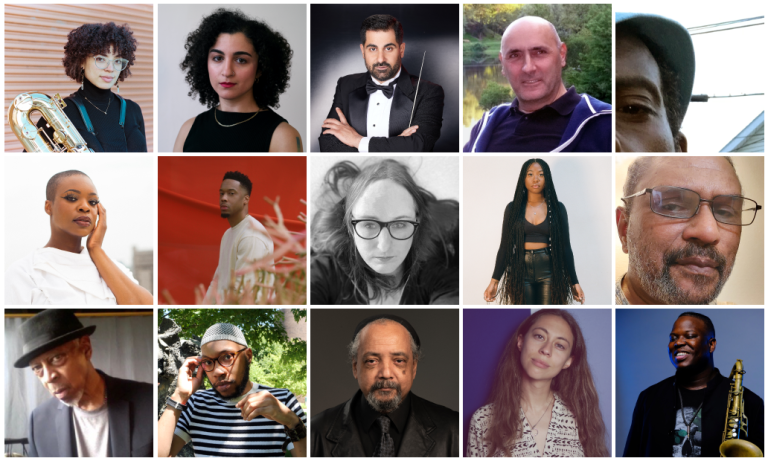 Thirty-one metro Detroit artists will share $550,000 in Kresge Artist Fellowships and Gilda Emerging Artist Awards. The awards were announced today by the Kresge Arts in Detroit office located at the College for Creative Studies, which administers the organization on behalf of The Kresge Foundation.

“The big reveal of a year’s Kresge Artist Fellows and Gilda Award winners has become something of a metro Detroit rite of summer. Many of us find confirmation about artists on our radar screen — and more importantly we’re introduced to many new artists making their marks on the city’s vibrant arts and cultural scenes,” said Kresge President and CEO Rip Rapson.

“These are 31 artists we can look forward to seeing, hearing, and experiencing in the months and years to come thanks to this program that supports and elevates artists individually. But it is of at least of equal importance that these artists remind us of our arts community’s collective contributions to the sense of our cultural roots and our future possibilities.”

The 2022 cohort ranges from emerging practitioners to celebrated veterans. The selection criteria for Kresge Artist Fellowships include a demonstrated track record of artistic achievement and high-quality work, the potential to grow and advance in one’s artistic career, and the potential to reflect, enhance, or impact communities within metropolitan Detroit. The award recipients are selected by panels of local and national arts practitioners, in their respective disciplines, over the course of several months and numerous rounds of review. (See full list of panelists below).

“The powerful pool of creatives from Detroit this year reflects the dynamic innovation, historical memory, and importance of creating transformative spiritual experiences,” said image maker, cultural curator, activist, and 2022 Film & Music panelist Piper Carter. “With a commitment to community, Kresge Artist Fellowships and Gilda Awards represent an appreciation for advancing the artist’s craft and the purposeful ideas needed in and for our world at this time.”

In addition to a $25,000 no-strings-attached award, Kresge Artist Fellows and Gilda Award recipients receive a tailored professional development experience that provides skill-building, networking, promotion and coaching opportunities. Produced by Kresge Arts in Detroit, offerings are created and delivered in collaboration with artists and arts and culture organizations representing local and national perspectives. Within the catalog of offerings, Fellows are encouraged to determine what best suits their goals and definitions of success. Gilda Award recipients are invited to participate in the majority of professional development opportunities.

Kresge Arts in Detroit will also continue its commissioned film series, which pairs Fellows with local filmmakers to create wide-ranging, interpretive film shorts chronicling the Fellows’ art practices. Short individual artist videos are available online at KresgeArtsinDetroit.org (on artist profile pages) and on the Kresge Arts in Detroit Vimeo page. The 2021 films made their premiere on Detroit Public Television — on broadcast TV and online — and are now being circulated through film festivals and artist websites. The 2022 films will go online next spring.

“Creativity is an essential component in society locally, nationally, and globally and our world needs the transformative power of the arts, now more than ever,” said College for Creative Studies President Don Tuski. “Honoring and investing in this cohort of Kresge Artist Fellows and Gilda Award winners ensures these artists’ ongoing contributions to our cultural community and beyond, and for that, CCS could not be more proud.”

“The 2022 Kresge Artist Fellows and Gilda Award recipients demonstrate that Detroit’s reputation as an unmatched creative hub is well deserved. Together, this year’s cohort will receive $550,000 no strings attached. The freedom inherent in these awards ensures that Detroit artists may continue to guide us through grief, bring us together in celebration, and light a path toward a brighter future,” said Kresge Arts in Detroit Director Christina deRoos.

Gilda Awards are $5,000 prizes for emerging artists, named in honor of Gilda Snowden’s (1954–2014) legacy as a mentor and champion of emerging artists in metro Detroit. The recipients are selected from the applicants for the 2022 Kresge Artist Fellowships. Gilda Awards recognize artists who are early in their artistic career, are gaining momentum, and who demonstrate exceptional potential through creative risk-taking and pushing the boundaries of their chosen art form.

“I was deeply impressed with the dedication of the organization and my fellow panelists during this selection process. The care and attention Kresge Arts in Detroit devotes to equity and diversity, to challenging institutional and personal biases, is huge,” said Film & Music panelist, composer, and artist Brian Kirkbride. “As a panel, we were fierce advocates for applicants we believed in, but also had the humility and openness to learn from one another to select the very best cohort of Kresge Artist Fellows we could. I’m grateful to have experienced that.”

An intimate gathering for the award recipients will take place in July, followed by the release of the recorded event. The program will include performances by the Kris Johnson Group (led by 2012 Kresge Artist Fellow Kris Johnson) and TeMaTe Institute for Black Dance (featuring 2020 Kresge Artist Fellow Ajara Alghali) — as well as remarks by award recipients and staff of Kresge Arts in Detroit, The Kresge Foundation and the College for Creative Studies. Video of the event program will be available July 27 at www.KresgeArtsinDetroitPresents.Art.