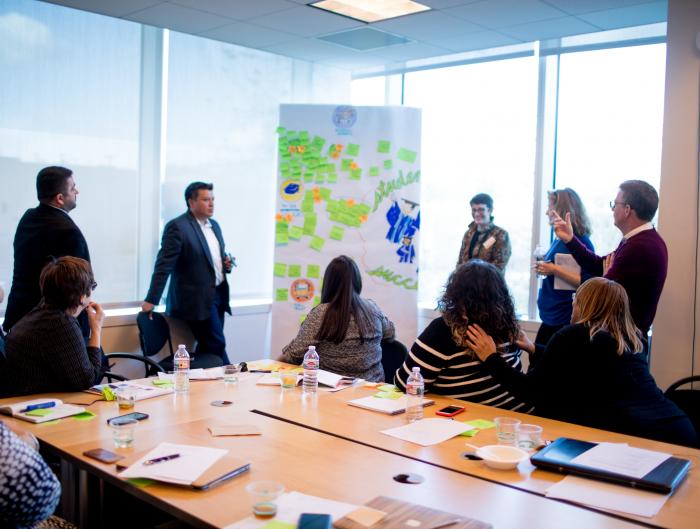 According to data published by CityLab, Los Angeles is home to nearly 1 million students taking classes through some type of postsecondary degree program, accounting for 7 percent of the city’s populace – a higher percentage than any other large U.S. metro of over 1 million residents. Those students attend more than 80 different institutions, and many of them attend more than one school at a time, taking credits wherever they can find them.

In the Los Angeles Community College District, one in five is homeless and two-thirds are food insecure, according to a 2017 survey by the Hope Lab.

And across the city, which is famous for its transportation issues, getting to class anywhere can be a burden.

Together, these statistics tell the story of what we call the urban higher education ecosystem (see definition in box). And earlier this month, Kresge’s Education Program gathered close to two dozen leaders in Los Angeles at The California Endowment to map that ecosystem.

The group included many of Kresge’s Education Program’s Southern California-based grantees including UNITE-LA, Southern California College Access Network, Families in Schools, as well as several statewide and national partners with LA-based work including Campaign for College Opportunity, CollegeSpring and many others.

A graphic recording team from Graphic Footprints facilitated the day’s conversations and activities, which included putting pen – or rather, Sharpies – to paper to chart out the sectors, systems, agencies, individuals, organizations and networks that play a role in LA’s UHEE.

“The chance to bring our partners into one room to think holistically about how students and families navigate local systems and how and where they are inter-connected was a powerful exercise,” said Kresge Program Officer Rebecca Villarreal. “We know our partners have deep collaborations with some parts of the UHEE, but might not have the opportunity to look at systemwide issues. We were thankful to be able to pull so many people into one room for a day to accomplish something that we hope will give all of LA’s education stakeholders an important resource for aligning and strengthening their work.”

By the end of the day, together the group had created multiple large-scale diagrams that made tangible the strengths of the existing ecosystem – as well as made clear where there are opportunities for future exploration. Some of the gaps included Kresge’s definition of the ecosystem itself, with attendees lifting up research centers and data infrastructure in particular as one missing piece.

“When you get the right people in the room,” said facilitator Michelle Boos-Stone, “magic happens.”

Topics of conversation included which university systems and institutions are most primed and ready to collaborate beyond their own campuses or get serious about implementing best practices that lead to lowered barriers to completion.

“Some institutions don’t think they can be any different than they are,” said Bill Moses, managing director of Kresge’s Education Program. He cited Georgia State as an example of how this isn’t true. At GSU, thanks to the use of predictive analytics and increased advising services, among other interventions, the school has closed all race-based graduation gaps. “Lots of leaders are busy dealing with emergencies or care-taking. They think that things won’t ever really change on their campus. But we are starting to see that shift.”

Systems outside of schools themselves were also discussed, from health care or child care to food, housing and transit. The group identified transit as one place for more future work and synergy.

“Beyond the slow times and schedules, there’s also the concept of the first mile and the last mile – to get to and from the transit station itself is often the barrier,” notes Marcia Wilson, dean of academic affairs and workforce development at Los Angeles Trade Technical College.

Other attendees identified vision as one big missing piece. Who is setting the regional postsecondary attainment agenda and providing a big, aspirational vision for the city as whole?

“We have never really had a critical mass to create a tipping point,” said Alma Salazar, senior vice president, Center for Education Excellence & Talent Development at UNITE-LA. “We need to build that critical will and co-create the systems change we need.”

That was one reason for the convening itself, said Moses.

“A lot of the people in this room are the ones with the vision,” said Moses. “It’s now thinking about how you can work together in Southern California that is really inspirational. You’re really far ahead compared to many communities.”