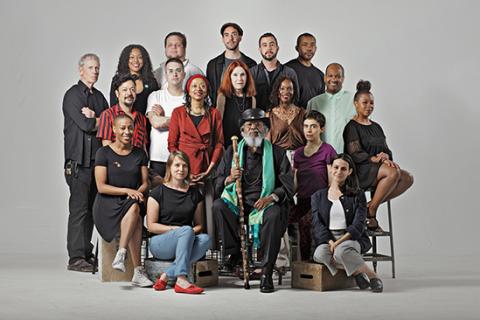 The foundation also funds the administration of the program, professional practice development for the Artist Fellows and – in 2011, 2013 and 2015 – Art X Detroit, a festival to present the Fellows and Eminent Artists in arts and cultural venues.

What difference has it made to artists? To the arts community? To the city?

There have been “abundant, clear and positive impacts on Fellowship award recipients, the Detroit arts ecosystem and civic leaders and infrastructure,” according to “Elevating the Artist,” an evaluation of the initiative’s first eight years by an outside consultant.

The report is based on 70 one-on-one interviews by Minnesota-based 8 Bridges – previously known as Lutman & Associates – including 24 award recipients, other artists and art leaders, civic leaders, Detroit and national grantmakers and Detroit journalists; 8 Bridges also convened a community meeting of 45 arts community leaders, reviewed media report and conducted a review of other foundation evaluations and other related literature.

Among the artists, the 8 Bridges interviews found that 75 percent used fellowship funds for “critical life and art-making expenses – from paying for funeral expenses of a family member to replacing the roof on a house; from creation of an outdoor sculpture garden to travel to broaden horizons and make new contacts.

“Fellowship funds supported works at a research or embryonic stage as well as projects that were languishing or dormant from lack of money.”

Artists also reported purchasing equipment, having increased time to concentrate on their art and to “‘take a breath’ and give themselves time to determine ‘what’s next’ in their artistic careers.”

The interviews found that the awards brought “recognition and validation’’ – sometimes allowing the recipient to be seen, at last, as a real artist versus “just doing something on the side.”

“Through this work, careers have been boosted, lives improved, and the community lifted by the artists’ strengthened voice,” writes Kresge President Rip Rapson in an introduction to the study.

The evaluators “found that by elevating the narrative of Detroit artists, Kresge has contributed to changing the narrative of Detroit to that of a culturally vibrant city where culture is taken seriously,” Rapson writes. “They concluded as well that Kresge’s efforts have paved the way for broader philanthropic art support, for greater business investment in arts and culture, and for a heightened appreciation of the transformative possibilities of the arts across municipal, civic, and educational institutions.”

The foundation’s support for individual artists is administered by the Kresge Arts in Detroit office at the College for Creative Studies. The professional practice development support for the fellows is delivered by Creative Many Michigan. Both efforts are supported by The Kresge Foundation.

“Earlier this year, we announced jazz musician, entrepreneur and educator Wendell Harrison as our 10th Kresge Eminent Artist. Next week, Kresge Arts in Detroit will announce an exciting 10th class of Kresge Artist Fellows and our new Gilda Awardees,” says Wendy Lewis Jackson, managing director of Kresge’s Detroit Program. “This look at the first eight years only adds to our confidence and commitment to continue this program, which has become so deeply ingrained in the community and is clearly delivering benefits.”

“One of the hallmarks of the program is that the awards are unrestricted,” says Jackson. “Artists needn’t specify projects when they apply or report on what they used the funds for. We trust them to make their own calls.”

Jackson said that many of the studies’ recommendations for improvements run parallel to changes already underway and continuing at the Kresge Arts in Detroit office in CCS.

For instance, the office has broadened its outreach soliciting applications while hosting more information sessions in the community to explain and support the application process. The Kresge Arts in Detroit office and Creative Many have also continued to take feedback into account in the evolving professional practice support for fellows.

The report provides suggestions on what might follow in the wake of the Art X Detroit festival, last held in 2015 when it had grown to a 10-day, three-weekend affair of installations, screenings, exhibitions, panels and workshops.

Although many artists were positive about Art X, others found it a distraction or inconvenient, and its presenters were ambivalent about the extensive work to continue it.

“There are a number of ideas in this report for new ways the foundation can support connecting Kresge Artist Fellows with audiences in the community,” says Jackson. “We’ve taken those under advisement and asked our partners for ideas as well. You can expect an announcement in the coming weeks that we think many in the arts community will find as exciting as we do.”

The report also suggested the Detroit Program integrate arts into a range of initiatives and look to boost the profile of Detroit artists nationally and internationally.

Jackson said those are among the ideas in the study that Kresge and its partners are working on.

For instance, she pointed to a number of grants involving arts in the Kresge Innovative Projects: Detroit initiative. The most recent round of that initiative, announced at the end of May, included planning and implementation grants for the revival of a jazz club and speakeasy as performance spaces and community hubs, as well as other projects supporting and engaging artists.

And last month, the Kresge Arts in Detroit office released its first feature-length film. Spotlighting the work and perspectives of the 2017 Kresge Artist Fellows, the film is in addition to the commissioned video series that documents individual Kresge Artist Fellows and Kresge Eminent Artists. Those are made, in part, as promotional tools for the fellows, and the new film is seen as a tool to promote them as a group.

Beyond Kresge, the study distills suggestions for metro Detroit leaders and the arts community. They range from creating new performing spaces and affordable housing specifically for artists to building up the pool of management, finance and promotion professionals who can work on behalf of artists.

“The evaluation has a great deal to say to other funders and sectors, not just here in Detroit, but in other communities as well,” writes Rapson in the introduction. “We invite others to look here for ideas to adapt – just as we continue to look broadly for new ideas to apply to our circumstances. There is food for thought and much to discuss. We look forward to those discussions in the months ahead.”