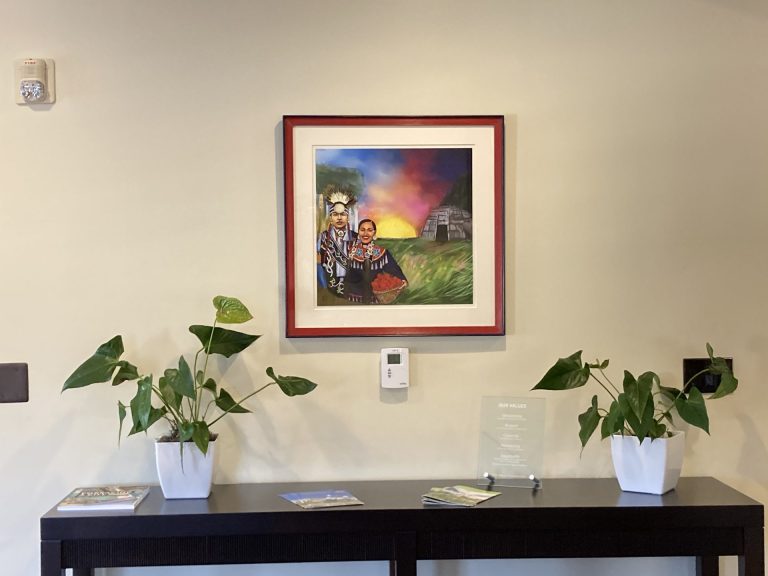 This artwork by artist Joelle Joyner (Afro-Kauwets’a:ka/Cherokee) was commissioned by Kresge, and it now hangs in the foundation headquarters lobby.

Our offices will be closed on Monday in honor of Indigenous Peoples’ Day. I wanted to convey a number of touchpoints that we might bear in mind as we observe it.

The acknowledgment of the Indigenous lands, though not sufficient, is a first step toward honoring the traditional guardians and enduring caregivers of this land and a means to prevent the obliteration of Indigenous culture. Kresge’s Troy headquarters is situated on the ancestral homelands of the Anishinaabek, as well as other tribal nations stretching back through history – part of the lands ceded by threat of force by the Ojibwe, Ottawa, Potawatomi, and Wyandot nations under the 1807 Treaty of Detroit.

To honor the day, the Foundation marks the day as a holiday and day of remembrance through convening learning events and a commissioned artwork from Joelle Joyner (Afro-Kauwets’a:ka/Cherokee) that now hangs in the reception area of our headquarters.

Canada – and the world – was rocked this spring by the horrific discovery of unmarked gravesites of some 1,300 Indigenous children near their boarding schools in British Columbia, Manitoba, and Saskatchewan –schools they were coerced into attending by governmental authorities and the Catholic Church as a means of forcing the children’s assimilation into white culture.

Tragically and shamefully, we in Michigan participated in this practice as well.

As in Canada, thousands of Native American children were forced for more than a century by the United States government to attend hundreds of boarding schools, three of which were located in Michigan: one in Baraga, another in Harbor Springs, and a third in Mount Pleasant.

The nation’s first Native American Interior Secretary, Deb Haaland – a member of the Pueblo of Laguna – announced that the Department was opening an intensive and comprehensive investigation into those now-shuttered schools, stating that the investigation would seek “to recover the dark history of these institutions that have haunted our families for too long.” Linda Coba, who attended the Holy Childhood School in Harbor Springs, observed: “It’s all come to light in Canada, and it’s like the tip of the iceberg — oh my God, just wait ‘til they start looking here.”

Two temporary exhibits, which run through the end of October at the Dennos Museum Center in Traverse City, Michigan, are showcasing the off-reservation boarding school history.

“Close to Home: Contemporary Anishinaabek Artists” explores the connection between the schools and contemporary Anishinaabek art. It features a half-dozen local artists, including most prominently two-spirit Anishinaabe artist Jamie John, 20, a citizen with the Grand Traverse Band of Ottawa and Chippewa Indians, as well as Renee Dillard, Jenna Wood, Yvonne Walker Keshick and Kelly Church.

Both exhibitions were made possible through a special program of the National Endowment for the Humanities, which announced this week that its new chair would be Shelly Lowe, a member of the Navajo nation and the first Native American to lead the Endowment.

The local curator told the Detroit News that the exhibits are a culmination of a two-year effort to bring them to northern Michigan and were done before the revelations came out of Canada. He noted: “It is important to localize these stories.” He worked closely with Eric Hemenway, director for the department of reparations, archives, and records at the Little Traverse Bay Band of Odawa Indians, to supplement the exhibit.

Honoring the Day in Detroit

The City of Detroit occupies the contemporary and ancestral homelands of three Anishinaabe nations of the Council of Three Fires: the Ojibwe, the Ottawa, and the Potawatomi. Three local groups – Vibes With The Tribes, We Are Culture Creators, and Fiesta Vibes – will combine to celebrate with a bonfire, music, food and good conversation at 6 p.m. EDT on Monday at Culture House, 4114 Bagley in Detroit. The event is free and open to the public, but registration is requested.