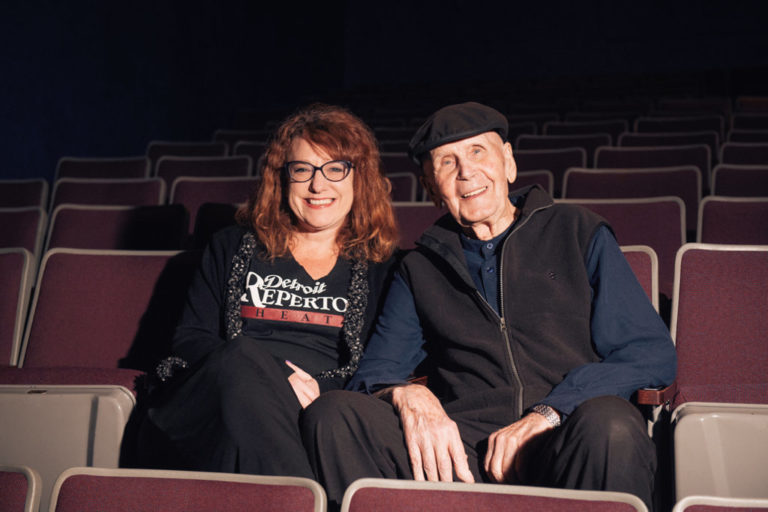 Leah Smith and Bruce Millan: Her goal is a smooth transition to ensure the theater’s around “for the generations ahead.” Photo by Ryan Southen

Detroit Repertory Theatre – a progressive, one-of-a-kind institution – is preparing for its first new director in its 61 years with a $500,000 fundraising campaign to support the transition and the theater’s ongoing operations.

The Kresge Foundation Detroit Program has granted $50,000 to kick off the effort. Theater officials hope to complete the fundraising campaign over the next three years as artistic director Bruce Millan hands over the reins to current marketing and development director Leah Smith.

“The $500,000 in bridge funding is intended to stabilize finances over the next three years and ramp up staffing to sustain the theater well into the future,” said Smith. “The current staff of five – two of which are unpaid positions – would expand to seven paid positions.”

Smith, who has been with the theater since 2003, is now director-in-training and will take the helm when the transition team is fully ramped up.

“The goal is to make the transition as smooth and visionary as possible to ensure the existence of ‘the Rep’ for the generations ahead,” said Smith, citing the theater’s mandates, which include producing quality theater with indigenous professional artists, providing training, fostering neighborhood revitalization, bringing cultural enrichment to the uninitiated, and demonstrating the power of diversity acting in unity.

“As a native Detroiter it had always perplexed me that there wasn’t theater that looked like and spoke to the people who live here, to the issues that are important to the people in this city. Then I found the Detroit Repertory Theatre and I knew instantly I had found my theater home. The founders of the Rep have created a unique Detroit cultural institution. I look forward to ensuring that the Repertory’s important mission of producing indigenous, union, socially relevant and diversity-centered theater lives to celebrate its 100th anniversary season!”

Detroit Repertory’s commitment to diverse casting goes back to its beginnings as a children’s theater, Millan recalled recently. This approach to casting was “unheard of back then,” he said.

“It’s about the belief that we’re all human beings. If two people are sisters in a play and one happens to be black – as Martin Luther King said, it’s the content of the character not the color of the skin. We’ve been a symbol not only in Detroit but nationally for our orientation, for fighting racism and the power of diversity,” Millan said.

At 88, he is believed to be the longest-serving artistic director of a professional theater company in America, and the theater he heads is the oldest professional nonprofit theater in Michigan.

The theater has also made a notable commitment to remain in the west side Detroit neighborhood it has called home since the early 1960s. The 194-seat jewel is inside a former dry goods shop on Woodrow Wilson Street in the shadow of the Lodge Freeway (M-10).

In that location, it has remained committed to high-quality production values, new playwrights, interracial casting and moderate ticket prices meant to keep the theater accessible to a broad public.

Read a Q & A with Bruce Millan.