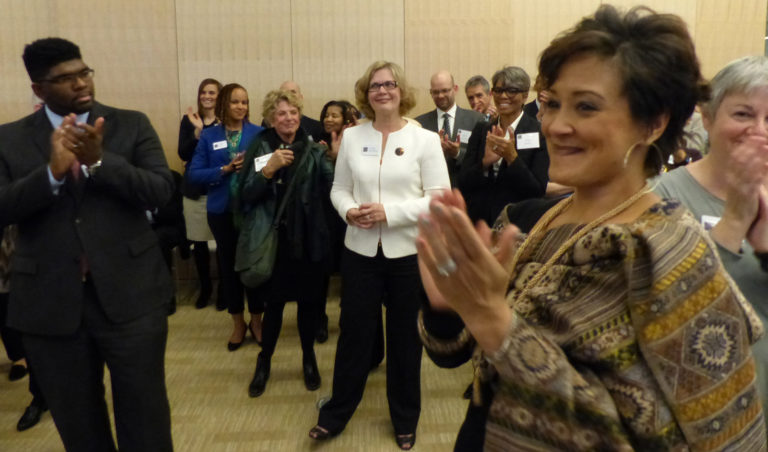 The Kresge Foundation Board of Trustees, staff and a throng of philanthropic partners, civic leaders and other well-wishers paid tribute Wednesday to Laura Trudeau, the founding director of Kresge’s Detroit Program and a leader in Detroit revitalization efforts, who retires at the end of the year.

“The breadth of what Laura has done during her 15 years with the foundation is astonishing,” Rapson told the crowd at Kresge’s Troy, Michigan, headquarters. “If it had been just the riverfront, if it had just been M-1 RAIL, we could say that was a success. But add Eastern Market, her work with public spaces, Midtown financing programs, the many neighborhood programs … it is simply remarkable.”

Elaine Rosen, Kresge board chair, recalled meeting Trudeau after joining the board in 2003. During a tour of the Detroit riverfront, then rife with abandoned buildings and other signs of disinvestment, Rosen said it was as if Trudeau could already see the inviting public space that would come to be with the jump-start of Kresge’s $50 million grant to the Detroit Riverfront Conservancy.

“During my initial introduction to Laura I saw a hint of the person that would continue to impact this city in ways that I don’t think we can fully comprehend today,” said Rosen. “Sometimes a rare opportunity and an even rarer person meet at exactly the right time.  With Laura, The Kresge Foundation and the great City of Detroit, we got to see that happen. And it was grand.”

Trudeau joined Kresge in 2001 after a 28-year career at the former National Bank of Detroit (now JP Morgan Chase) where she oversaw grantmaking in Detroit and beyond as vice president and regional head of philanthropy and community relations.

As leader of Kresge’s Community Development program and the Detroit Program into which it evolved, Trudeau has overseen the investment of more than $425 million in grants and loans to local nonprofits and national organizations helping to move the city forward.

Other Kresge collaborations and initiatives in which Trudeau played a key role span the gamut from the Grand Bargain (which was instrumental in the successful resolution of Detroit’s municipal bankruptcy in 2014) to Detroit Home Mortgage (which helps buyers obtain mortgages to purchase and renovate Detroit homes) to Kresge Innovative Projects: Detroit (which has supplied grants to city-based nonprofits transforming neighborhoods in every city council district).

Tiffany Douglas, Bank of America senior vice president, said Trudeau was able to accomplish great things by being “an ultimate Detroiter, our cheerleader in chief, a key convener and a quiet leader who just gets things done.”

Trudeau said that although she’s retiring from The Kresge Foundation, she’s not retiring from what some call “the coalition of the willing.” That’s the group of “people who don’t need to be convinced that Detroit is critically important to our region. They fight for the city and its people willingly and enthusiastically and invest in a safe, vibrant place where all people can live productive, self-fulfilling lives.

“This work is done best when it is done out of love, and that love doesn’t go away because a person takes off one hat and puts on another,” she said.