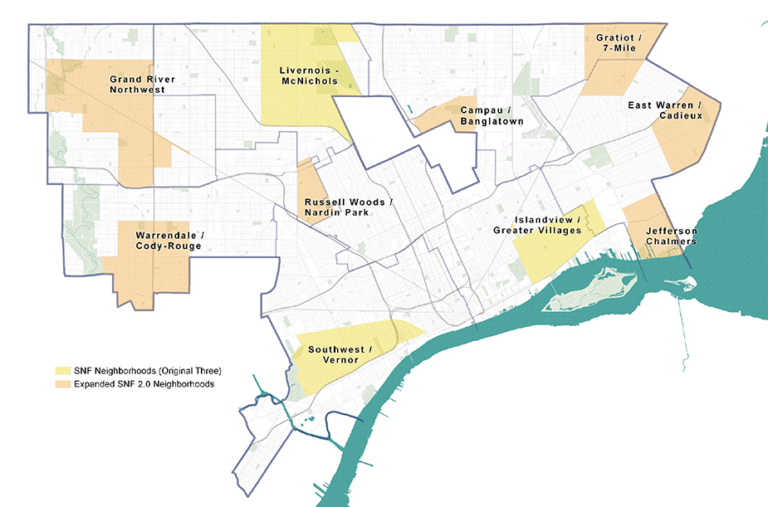 The Kresge Foundation has made a new $15 million commitment to the large-scale expansion of a city of Detroit neighborhood revitalization effort announced today.

Along with Invest Detroit – the leading community development financial institution for private sector financing in the city – what’s being dubbed Strategic Neighborhood Fund 2.0 will raise $130 million to create a total of 10 vibrant areas throughout the city, expanding from the three neighborhood areas in the original phase of the fund, announced in February 2017.

Work in these 10 areas will encompass more than 60 individual neighborhoods over the next five years, supporting the creation of livable, walkable, and vibrant neighborhoods, including streetscapes, park improvements, commercial development and housing stabilization.

To reach that $130 million goal, the city and Invest Detroit will begin by raising $56 million in private and philanthropic support, which will then be matched by with local, state and federal dollars.

The Kresge Foundation, whose Detroit Program focuses on the revitalization of neighborhoods across the city, is the first organization to make a commitment to the fund, pledging $15 million at a meeting of top local and national philanthropic organizations late last month.

“In the first three neighborhoods, we went in and worked with the residents to support development and we saw some incredible results,” said Detroit Mayor Mike Duggan. “We’ve got new mixed-use apartment buildings with affordable housing, we have new businesses and new parks opening up. We applied the tools that drove the development in downtown and midtown and put them into neighborhoods, and now we’re expanding that to seven more areas across the city.”

“Kresge is proud to join with the city administration in this ambitious step toward the deep and systematic revitalization of neighborhoods,” said Kresge President Rip Rapson. “It is an effort that is as complicated as it is important. It will require all segments of our community – residents, businesses, community- and faith-based organizations, public agencies, and foundations –to work hand-in-glove. For Kresge, that means that we will seek to layer multiple forms of investments – from community-based projects across the city to operating support for community nonprofits to the concentrated housing, economic development, and open space investments intended to catalyze the renewal of neighborhoods like Livernois-McNichols.”

Rapson compared the expansion of the Strategic Neighborhood Fund the “Grand Bargain” arrangement which guided the city out of bankruptcy in 2015. Key to the Grand Bargain was the assembling of $366 million from philanthropies, including $100 million from The Kresge Foundation

“Much as the Grand Bargain united a coalition of city advocates to reset the municipal machinery, the Strategic Neighborhood Fund heralds a turning point for neighborhoods,” said Rapson. “Now is the time to show we mean it when we say neighborhoods are the heart and soul of the city.”

The Strategic Neighborhood Fund is alignment with a number of the Kresge Detroit Program’s major initiatives, including Kresge Innovative Projects: Detroit, operating support for community development organizations, and the layering of investments to catalyze neighborhood areas such as the Livernois-McNichols area through the Live6 Alliance. 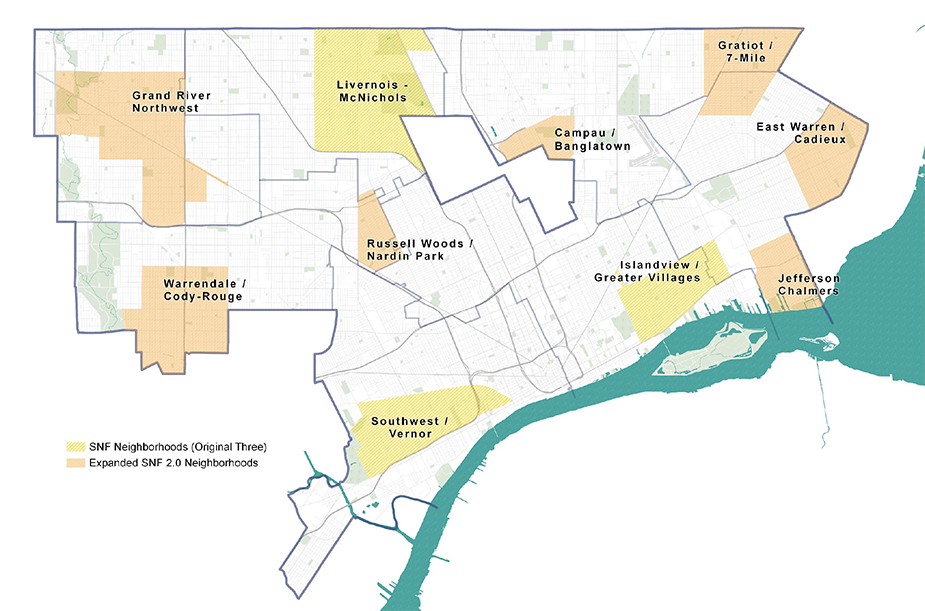 The three neighborhood areas in the first phase of the Strategic Neighborhood Fund – a $42 million pilot effort –  are:

The seven new neighborhood areas in Strategic Neighborhood Fund 2.0 are:

The city has already committed $50 million to that fund, which will preserve 10,000 existing affordable housing units and create 2,000 more over the next five years. The comprehensive strategy comes from Mayor Mike Duggan’s pledge to build “One Detroit. For All of Us.”