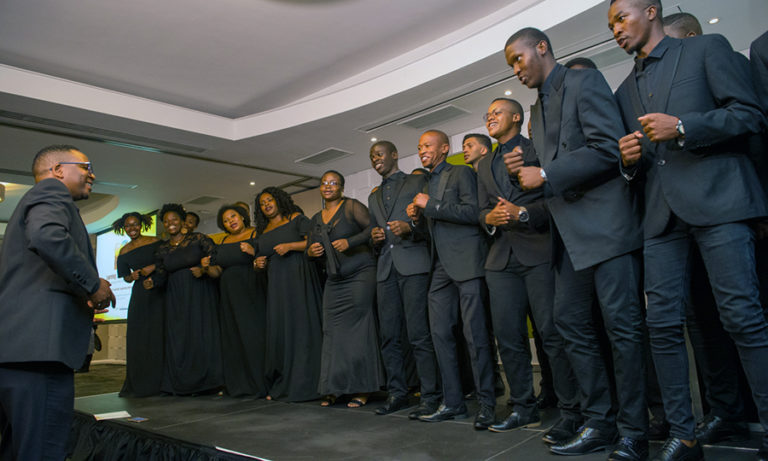 Students from the University of the Western Cape’s Creative Arts Choir perform at the 2019 Inyathelo Leadership Retreat, under the direction of Sibusiso Njeza.

A 13-year partnership between the Kresge Foundation and Inyathelo, the South African Institute for Advancement, helped eight universities and one teaching hospital double, triple, and in some cases, quadruple private fundraising between 2006 and 2019.

This week, Kresge Education Program Managing Director Bill Moses met with participants at Inyathelo’s 2019 leadership retreat entitled, “Learning Through Reflection: Advancement for a Sustainable Future.” Moses offered a look back at the impact of the Kresge-Inyathelo Advancement Initiative.

“Nearly a third of South Africa’s higher education system has benefitted directly from the work of Inyathelo,” said Moses. “And every single university in the nation has been shaped by the transformative engagements of this organization.”

Key successes include the University of the Western Cape, which within its first five years of participation in the initiative, raised $41 million to construct an iconic and bustling life-sciences research building.  Smaller institutions such as the Durban University of Technology (DUT) have also grown their fundraising capacity. Funds raised by the DUT development office helped the school double the number of need-based grants for students, from 10 in 2017 to 20 in 2018. DUT has also been able to appoint three more fundraising staff members in 2018, increasing capacity to five staff members.

This week’s retreat participants included more than 60 college leaders, representatives from the Department of Higher Education and Training, and Africa-based philanthropic leaders.

The event comes at a critical moment for Inyathelo, which recently named Nazeema Mohamed as its newest executive director. Mohamed previously served as the director of policy development and support in South Africa’s Department of Education and, more recently, as a program officer at the Ford Foundation.

The retreat also comes as the 13-year partnership between Inyathelo and Kresge nears its completion. Kresge’s grantmaking supported advancement training and capital projects, and totaled $22.4 million. In recent years, Inyathelo has secured grants from national and international foundations to support its ongoing work.

In a letter to Kresge President Rip Rapson, South Africa’s Minister of Higher Education and Training Naledi Pandor wrote, “It is with great pleasure that I take this opportunity to thank The Kresge Foundation … as we mark the completion of a groundbreaking chapter in our higher education sector.” Moses accepted the letter on behalf of Rapson at this week’s event. The letter concludes, “South Africa still faces many challenges as we work toward Constitutional goals of making further education progressively available and accessible. However, the support of The Kresge Foundation has given us powerful tools with which to do so.”