Genise T. Singleton has been named director of Grants Management at The Kresge Foundation. Singleton joined the foundation in 1995 and most recently served as manager of the department, which was previously named Program Operations and Information Management. The department has been renamed to better align with nonprofit sector nomenclature and to provide clarity to internal and external partners. 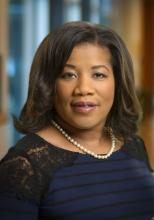 “Genise has demonstrated deep care for her fellow teammates and has served as a solid champion of Kresge’s values,” said Kresge President & CEO, Rip Rapson. “She also has strong grants management expertise, is fully committed to the profession, and exhibits a continuous improvement mindset that will fuel innovation within Kresge and across the sector.”

Singleton has a deep interest in how data can be used to advance the work of the nonprofit sector and is a member of several philanthropic affinity groups that seek to advance the art and science of the grantmaking profession.

A Detroit, Michigan, native, she earned a bachelor’s degree in English from Marygrove College and served on its alumni board, as well as on the boards of several other nonprofits.