Food, culture, entrepreneurship on the menu at community-led Mercado Esperanza 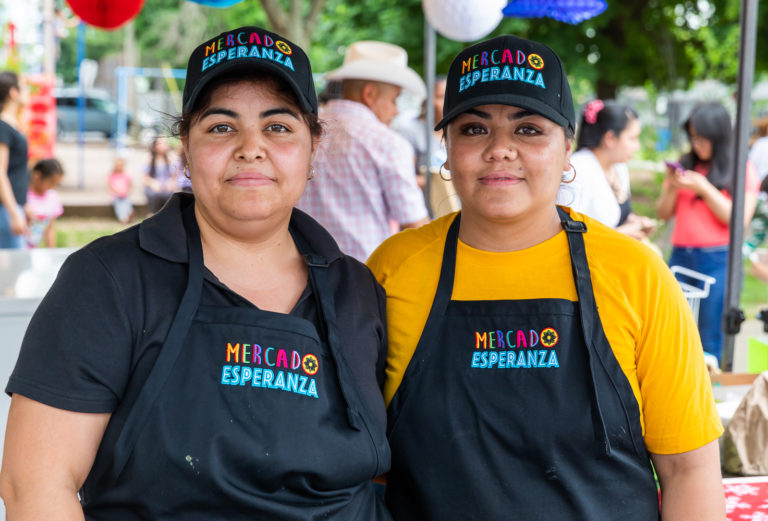 In Spanish, the word esperanza translates to “hope” in English. In New Brunswick, New Jersey, the residents of the Esperanza neighborhood aren’t just hoping for better housing, education and access to healthy food, they are stepping up as civic leaders, making their voices heard and creating changes in their community.

At Elijah’s Promise, a non-profit organization in New Brunswick, the team listens to residents and works with numerous community partners to build programs to break the cycle of poverty and change lives, Anthony Capece, associate director at Elijah’s Promise, said.

As one of The Kresge Foundation’s 23 Fresh, Local & Equitable (FreshLo) grantee partners, Elijah’s Promise collaborates with two other local organizations, New Brunswick Tomorrow and coLAB Arts on its FreshLo-funded work. The FreshLo initiative, a joint effort by Kresge’s Art & Culture and Health programs, is its first national program to intentionally and equitably integrate food, creative placemaking and community development to drive neighborhood revitalization. 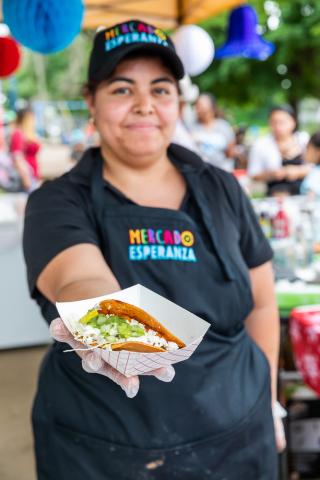 Elijah’s Promise, New Brunswick Tomorrow and coLab Arts together sponsor a community-led initiative called Mercado Esperanza. The monthly Mercado is a vibrant community gathering place, a springboard for local entrepreneurial success for local food vendors and artisans, and celebrates the cultural heritage and artistic soul of the predominantly Latino neighborhood. It is guided by a steering committee of resident leaders who work together with a core group of vendors to make their collective vision of the Mercado Esperanza a reality.

After a year of planning together with local residents and other stakeholders, the Mercado kicked off its first season in 2018.

The third Sunday of every month, the smell of fresh tacos and tortas fills Joyce Killmer park as residents from throughout the region, eat, mix and mingle with each other.

For many residents, it brings back memories of the countries they lived in, and that’s something they want to share with others, especially children, in the neighborhood, Carolina Moratti, who organizes for the Mercado and is a graduate of Promise Culinary School, explained.

Several alumni of the Promise Culinary School, which has graduated more than 900 individuals from its affordable state-certified culinary vocational programs since 1997, have become vendors at the Mercado, Moratti said.

While vendors do receive financial training and track sales, Diaz-Tapia noted that each Mercado is a learning experience.

“It’s not as easy as showing up one time a month and having a business,” Diaz-Tapia said.

For one vendor, it even became a family affair. While initially the mother of the family did all the cooking at their booth with the father and son standing by, over time, both father and son became involved in the business.

This year, the Mercado continued to grow. In the 2019 season, there were an average of 18 vendors at each Mercado, with 12 being food vendors and six cultural vendors.

“They have the ideas, we give them the opportunity and the space,” Diaz Tapia said.

In addition to delicious food, the Mercado also features musical and dance performances through the Teatro Esperanza.

“We want to share music, theatre, dance and cultural performances with people who may not be able to afford it otherwise,” John Keller, director of education and outreach for coLAB Arts, said.

“People make an event out of coming to the Mercado,” Capece said. “People know when it is now and look forward to it.”

Looking ahead to next year, Capece continued, organizers want to create even more space for both food and cultural vendors.

For those who are in need of a space to cook, Elijah’s Kitchen also offers commercial kitchen space to rent in two locations for $20 per hour.

“We are excited to be able to provide a cooperative space to create hyper locally-produced food in a region that is typically underserved by these kinds of opportunities,” Capece said.  “Food changes lives – not only to feed those in need, but also to empower those who just need a chance to succeed.”