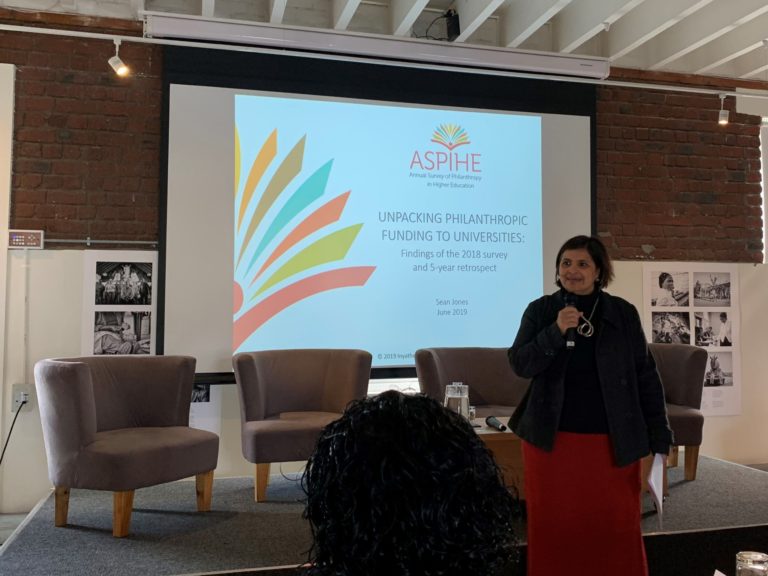 The latest Annual Survey of Philanthropy in Higher Education (ASPIHE) report reveals a total of R1.71 billion (US$121 million) in philanthropic support to universities in 2017, R978 million (US$69 million) higher than recorded for the ten universities taking part in the first survey in 2013.

The survey results were announced at a symposium in Cape Town on June 23. Bill Moses, managing director of Kresge’s Education Program, moderated a panel highlighting this progress.

Eleven universities took part in the survey, which was commissioned by Inyathelo.

In 2017, the proportion of support from South African sources was 72 percent, a considerable increase over 2013’s 37 percent. International donors contributed 28 percent of 2017 philanthropic support but comprised only 10 percent of donors.

“Much of what we know and have done in the area of Advancement was made possible by the Kresge Foundation’s investment in Inyathelo and South African universities,” said Nazeema Mohamed, executive director of Inyathelo. “Given the complex challenges facing the higher education sector, and the need for urgent and constructive input, we are deeply appreciative of this long-term commitment that has led to greater clarity and understanding.”

While noting the encouraging progress in philanthropic funding overall, the report adds that it, “obscures some extremely significant and severe differences and inequalities,” and “a considerably less rosy picture emerges when the universities are disaggregated along the lines of historical advantage and disadvantage.”

“When we started this work in 2006, few South African universities of any type were raising private funds,” said Moses. “This report suggests that giving has changed dramatically over the succeeding dozen years.  Private philanthropy can never replace government and tuition support, but it can help support university excellence and reduce pressure on annual fee increases.  The challenge facing South African universities is to reach and engage more donors and to help more HDIs build their own advancement operations.”