The deliberate infusion of arts and culture as an integral part of community development has gained significant inroads nationally, but can still feel like swimming upstream for community leaders and practitioners aiming to make it a commonplace practice according to “Creative Placemaking and Expansion of Opportunity: Observations and Reflections” – a new white paper released by The Kresge Foundation’s Arts & Culture Program 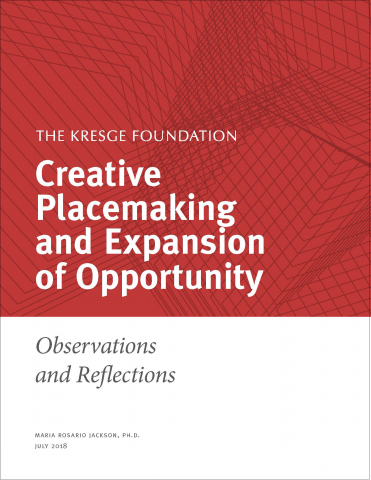 The paper identifies several critical needs to grow the field of Creative Placemaking, which Kresge defines as the integration of arts, culture and community-engaged design strategies into community development and urban planning.

The paper was authored by Maria Rosario Jackson, PH.D., senior adviser to the foundation’s Arts & Culture team. It is the second in a series aiming to help illuminate the foundation’s approach to Creative Placemaking, share lessons learned, identify challenges and opportunities, and encourage conversations in the field.