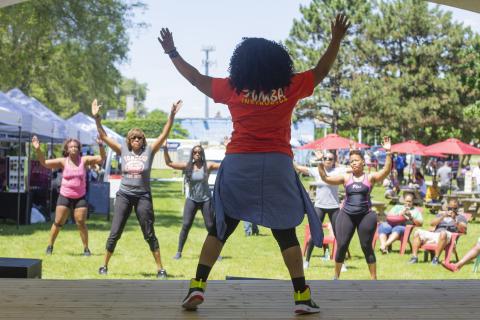 Since 2015, the Reimagining the Civic Commons (RCC) national initiative has sought to revitalize and connect civic assets with people of all backgrounds, create more resilient communities and reverse trends of economic and social fragmentation in cities.

Reimagining the civic commons in Detroit

Detroit’s project, convened by the City of Detroit Planning and Development Department, supports the development of a network of civic commons sites in the Livernois-McNichols and Fitzgerald neighborhoods.

RCC has helped foster increased coordination among neighborhood partners to expand community programming and events, as well as the conversion of what had been vacant lots and abandoned houses into Ella Fitzgerald Park and greenways that enhance resident connections to one another and to nature.

The coordination efforts reached an important milestone in 2019 when the Live6 Alliance, a collaborator in Detroit’s project, launched Neighborhood HomeBase, a storefront community space for residents to gather while connecting with neighborhood organizations, nonprofits and civic leaders.

Fitzgerald is also seeing increased reinvestment and reactivation along its commercial corridor on West McNichols Road including the rehabilitation of several new community storefronts.

Findings from five years of experimentation

A new Urban Institute report offers key takeaways on the policy and practice dimensions of Reimagining the Civic Commons.

The report, “Civic Assets for More Equitable Cities” examines RCC’s approach to civic assest invesment in cities and identifies core lessons that can be applied by civic leaders, policymakers, nonprofit leaders, and local and regional philanthropists seeking to reimagine civic spaces in their cities.

The researchers determined that the initiative’s emphasis on outcomes and a portfolio approach to thinking about spaces shifted how stakeholders lead, govern, manage and approach civic assets. This shift in mindset can catalyze lasting community and systems change.

To aid in the measurement of outcomes, RCC developed a system to track a range of metrics organized around four key goals: civic engagement, socioeconomic mixing, environmental sustainability and value creation.

A portfolio of assets

In a recent discussion hosted by the Design Trust for Public Space, Chantel Rush, managing director of The Kresge Foundation’s American Cites Program, discussed the connection between space and equity.

“Through the Civic Commons work, our city partners considered separate public assets a portfolio, and discovered that together, these collections of assets could work together to deliver more to a community,” Rush said.

In Memphis, a Kresge focus city, the 6-block area adjacent to downtown and the Mississippi River named the Fourth Bluff has been transformed into a series of vibrant and dynamic civic spaces activated by innovative, free and inclusive programming. The space is home to the historic Cossitt Library, River Line Trail, Memphis Park and Mississippi River Park. Today, Memphians from all backgrounds can gather there to connect with nature and one another.

Shamichael Hallman, branch manager at Memphis Public Library and civic engagement manager at The Fourth Bluff described the significance of spaces that bring together people of all backgrounds and incomes.

“I think the degree to which we’ve been able to encourage socioeconomic mixing [through] the design of these spaces and … the cultivation of stewards and champions and such has really created this space where there’s just a really nice mix of people that are showing up and interacting with each other, and I think that’s a huge accomplishment being in the South,” Hallman said.

To successfully reimagine civic spaces, residents must be at the center of the planning phase, said Regina Smith, managing director of the Arts & Culture Program.

“From greenspace activation to vacant land development, the insights offered in this report are great examples of how creative, place-based, human-centered practices can contribute to more equitable solutions in neighborhoods with the greatest need,” Smith said. “Using creative, resident-centered methods to design, develop and steward open spaces in disinvested neighborhoods is key. To truly restore our cities, we must activate residents’ voices to change the narrative around people with low incomes. Only then can we repair the social fabric in communities damaged by decades of disinvestment.”