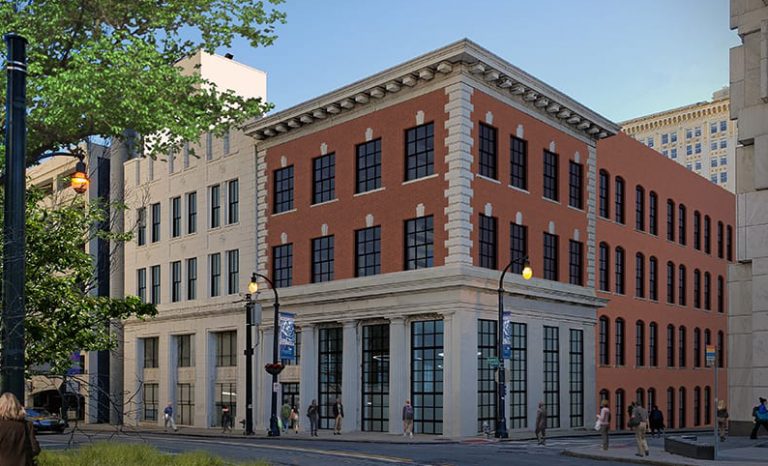 A rendering of the Georgia State Univeristy's National Institute for Student Success.

The Kresge Foundation Education Program has provided a $2 million grant to Georgia State University’s National Institute for Student Success (NISS) to support its implementation phase, including start-up and endowment capital.

The NISS will work with colleges and universities to help them implement data-centered, technology-driven and evidence-based systems to increase college access and completion. A previous planning grant from Kresge helped the NISS develop a model for disseminating the innovative student-success programs pioneered at Georgia State across other post-secondary institutions nationally.

The NISS, which opens in early fall, will help colleges and universities identify and resolve institutional barriers to equity and college completion by increasing their capacity to implement proven student-success systems and data-driven interventions and enact systemic change to institutional processes and structures. Led by a team of practitioners with experience successfully designing programs, the NISS will implement and scale some of the most transformative student-support systems in the nation. Using data-driven approaches such as predictive analytics, chatbots enhanced with artificial intelligence, early alerts, completion grants and proactive advising, Georgia State has more than doubled graduation rates for underserved students and eliminated equity gaps based on race, ethnicity and income level.

“Georgia State’s remarkable success at closing racial and achievement equity gaps has become iconic in higher education both nationally and around the world,” said Bill Moses, managing director of Kresge’s Education Program.  “The NISS’s genesis emerged from Georgia State becoming a mecca for reformers interested in the university’s programs, technologies and practices. The university has pioneered higher education’s use of data-driven solutions. This is the logical next step.”

“We are deeply grateful for our continued relationship with Kresge,” said Dr. Timothy Renick, the NISS’s executive director. “The Kresge Foundation not only has been a valued thought partner with Georgia State as we develop next-level innovations to support our own students, with this gift it underlines the importance of replicating the successes we have seen at Georgia State across the nation and beyond.  Equitable access to and success in college should be the norm, not the exception.”

Kresge supported Georgia State’s consolidation with Perimeter College in 2015 and funded the Summer Success Academy at Perimeter, which enrolls students during the summer semester before their first fall semester at Georgia State. Students take three college-level courses while being supported with intensive advising, supplemental tutoring, financial literacy training and leadership experiences. The grant also supported the collection of data about the program and the writing of a white paper on the Academy that helped other universities nationwide deploy a similar model.

Perimeter’s 3-year graduation rate has increased from 6.5% to 22%, and the percentage of Perimeter students who graduate or successfully transfer to a four-year institution now is at 83%, leading the Chronicle of Higher Education to rank Perimeter among the top-20 community colleges nationally. Kresge support also helped the publication of a book, Won’t Lose This Dream and a 10-minute video documenting Georgia State’s student-success work. Kresge’s investment team also made a recent mission-related investment in AdmitHub, the artificial intelligence-based texting company whose platform was pioneered by Georgia State to enhance student success and is now used by dozens of other universities.