Katrina anniversary allows a moment to remember, look ahead

A key takeaway from The Kresge Foundation’s work in New Orleans, and in our hometown of Detroit, is that philanthropic action is much more powerful in places deep in crisis when civic leadership welcomes collaboration and invites a distribution of power.

We all recall the fear and devastation that followed when Hurricane Katrina landed in New Orleans 10 years ago. The milestone anniversary on Aug. 29 led the nation to remember the lives lost and those changed forever, examine how recovery has helped and where it has fallen short and explore what work is left to do.

Last week, I joined several members of our Kresge staff in New Orleans to pay our own respects to the city and its people. We went to meet with colleagues in the philanthropic sector and catch up with our partners on the ground. And it helped us further our thinking about how the next 10 years of investing in New Orleans should look.

On Friday morning at the Katrina10: Fulfilling the Promise convening, I joined leaders from five other national foundations, each with extensive and impactful bodies of work in post-Katrina New Orleans. Each of these funders has approached their work here in their own strategic and meaningful way. During the panel, we shared lessons from our work over the past decade.

At Kresge, we’ve learned that our work can’t happen without deep intentionality to tie seemingly discrete actions together. And mitigation of – and preparation for – climate change must be a central cog. Another takeaway from our work in New Orleans, and in our hometown of Detroit, is that philanthropic action is much more powerful in places deep in crisis when civic leadership welcomes collaboration and invites a distribution of power. 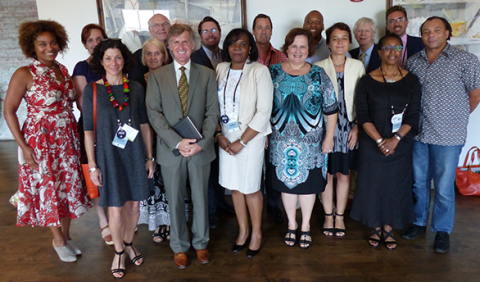 At lunch, our team met with a number of local partners at Café Reconcile, a life-skills and job-training program for at-risk young people that happens to serve some of the best soul food in the city. Our partners shared their experience with the influx of philanthropic support since the flood, and how they approach working across sectors and issue areas. It was a rich and telling conversation, and I wish I could share all of the insights with you. One that particularly resonated with me was that early on, local nonprofits felt great support to come together to plan the city’s recovery, but less support from funders when it later came time to implement those plans. They also shared universally that the city is nearing an affordable housing crisis that threatens to undo much of the progress made since Katrina. 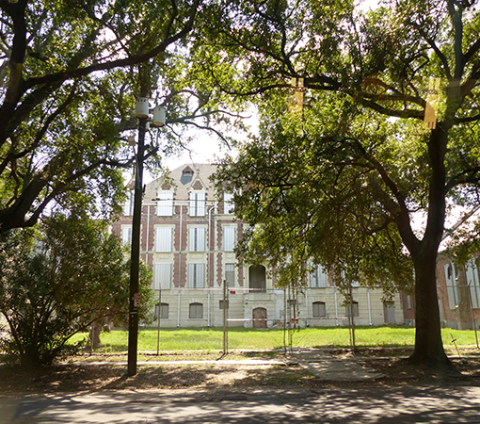 Later in the day, we visited several neighborhoods that a decade ago were under water. Among many bright spots is the Bell School, in the center of the Tremé neighborhood. Abandoned since Katrina, the school had played an important, historical role in introducing low-income children to jazz. Now, with Kresge’s support, it is being redeveloped by Artspace and will feature nearly 80 affordable live/work housing spaces for artists and their families when it opens later this year. We also saw great progress in the Lower Ninth Ward, an area that was physically obliterated by flooding. But the residents who stayed are mentally resilient, and have proudly helped to restore their neighborhood by removing blight, cleaning up vacant land and building new homes with organizations like Brad’s Make It Right Foundation. Now numbering close to 100, these modern, airy units, built several feet off the ground, feature solar panels on their roofs and traditional New Orleans pastel colors on their facades.

One thing I heard often in New Orleans is that there is a disconnect between how the city’s African Americans are experiencing recovery and how the white population is experiencing it. As New Orleans continues on its path to rebuild, national philanthropy, including Kresge, remains committed to tackling all of these complex issues. Knotting together issues like racial equity, affordable housing, preparing for and mitigating climate change and integrating arts and culture is essential to ensure comprehensive, sustainable solutions. This will require all of us to work collaboratively and across all sectors of civic life. It takes time, but Katrina has taught us that this collaboration and openness to partnership is possible and transformative.

While we look back in mourning, we also celebrate our unique partnerships and our collective desire for positive change that continues to spread throughout all corners and for all people in the city of New Orleans.

A mural depicting part of downtown New Orleans reflects the city's heritage of music and celebration.